The Bulgarian government this September announced the official launch of the Belene Nuclear Power Plant, a project it has billed one as of the largest in the European Union (EU). Valued at €4 billion, Belene is now facing funding issues — though the government, which deems the plant vital to the country’s energy and economic security has claimed it would support the project with funds from the state reserve if necessary.

The plant has been in the offing for more than two decades. In the early 1970s, the Bulgarian government (then a communist body) and the Soviet Union had discussed construction of a second nuclear power plant, and a site on the Danube River had been approved by 1981. Through the years, the plant’s development has been stalled by the country’s political and economic development — as well as by its energy needs. The decision to build the new plant comes after Bulgaria shut down its Kozloduy plant as a condition to joining the EU in 2007. The cost of closing that plant — which had exported power to Greece, Turkey, Serbia, and Macedonia — has been steep to the country’s coffers, officials estimate.

State-owned utility National Electric Co. plc. (NEK) will build the plant. The Belene will consist of two 1,000-MW AES-92 model VVER units, built by Russia’s AtomStoyExport (ASE) — similar to two units already built by ASE in Tianwan, in China. France’s AREVA and Germany’s Siemens will be subcontractors on the project, and Bulgarian companies will be involved in its construction. Unit 1 is expected to take 6.5 years to complete, and Unit 2, 7.5 years (Figure 6). 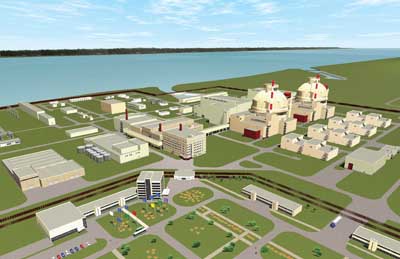 6. Bulgarian nuke. Construction work on the Belene Nuclear Power Plant, considered one of Europe’s largest projects, was officially launched this September. Though the plant is facing funding challenges, it is expected that construction of Belene’s first unit will start in March 2009 for operatrion by 2013, while construction of the second unit will be carried out between March 2010 and the end of 2014. Courtesy: National Electric Co., plc

In September, the government also announced it had chosen German power utility RWE to become a strategic partner with a stake of 49%. RWE has not accepted this proposition yet — even though it contended fiercely with Belgium’s Electrabel, CEZ of the Czech Republic, E.On, and Italy’s Enel for the bid earlier this year. Industry insiders said that the company is under pressure from environmental groups such as Greenpeace and Green Party politicians, and it may delay its decision until it receives more evidence about safety plans to defuse those concerns.

Bulgaria’s Deputy Energy Minister Yavor Kuyumdzhiev warned that Bulgaria would only wait until the spring of 2009 for RWE’s board to make the decision to join the project. "If RWE gives in to pressure from green activists, they will make a mistake," he told reporters in November. "Given the huge power shortages in Southeastern Europe, this is a unique investment offer. So, if they do not jump on it, someone else will."