It’s been five years since the Great Tohoku Earthquake and tsunami prompted a crisis at the Fukushima Daiichi nuclear plant in Japan, but the world’s nuclear power sector is still lurching from its aftershocks.

The Crisis at Daiichi Endures

Five years ago, nearly a day after the 3-minute, 9.0-magnitude Great Tohoku Earthquake struck northeastern Japan—and unleashed a tsunami that killed 20,000 people—the world learned that Tokyo Electric Power Co.’s (TEPCO’s) Fukushima Daiichi and Daini nuclear plants were in peril after rising waters inundated and disabled offsite power supplies. In the days that followed, the world watched in horror as three units at Fukushima Daiichi consequently saw explosions that damaged their reactor buildings. It was later established that the cores of Daiichi 1, 2, and 3 had largely melted within the first three days of the crisis.

But today, crews at Daiichi continue a struggle to stem the buildup of contaminated water. While TEPCO has discharged about 230,000 tons of water to the ocean after decontamination (using a multinuclide removal facility that can remove most radioactive materials except tritium), groundwater continues to accumulate in the damaged buildings at a rate of about 150 tons a day (Figure 1). 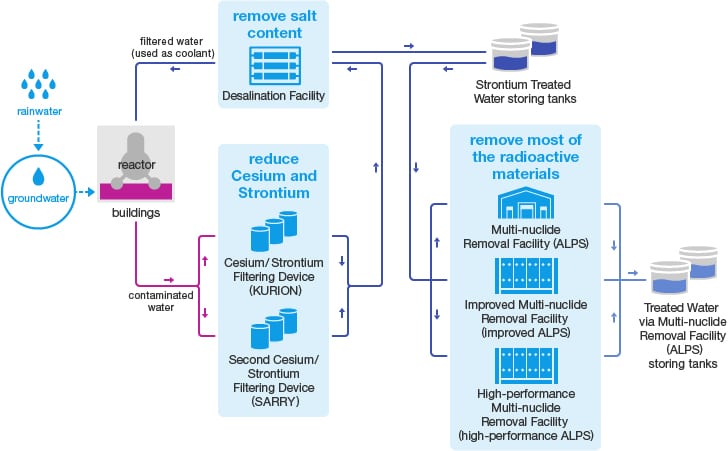 At the same time, techniques still need to be developed to locate, extract, and dispose of the melted fuel. TEPCO has proposed a 40-year timetable for the plant’s decommissioning, but it will likely take much longer, experts say.

As the following video from the International Atomic Energy Agency shows, much progress has been achieved, but challenges remain.

Some Nuclear Plants Returned to Service

Meanwhile, over the past year, following a gap of nearly two years since the nation’s last nuclear power plant was shut down for safety checks, a handful of nuclear units have come online (Figure 2), including Kyushu Electric’s Sendai 1 and 2, and Kansai Electric’s Takahama 3 and 4.

But, despite rigorous safety checks, operating plants still face political pressures: On March 9, 2016, for example, a district court issued a temporary injunction prohibiting the operation of Takahama 3 and 4 owing to safety concerns, forcing them to shut down.

After five years of ups and downs—including pivotal administration changes—Japan’s nuclear future is still murky, even though it now plans to stick with nuclear in the long run.

On July 16, 2015, the Ministry of Economy, Trade and Industry took a decisive step and approved a long-term energy supply and demand strategy (Figure 3). Based on the so-called “three Es” policy calling for energy security, economic efficiency, and environmental protection, the Strategic Energy Plan (which had been adopted by the Cabinet in 2014) calls for Japan to produce at least 22% of its power from renewables by 2030. The rest of its power mix will comprise: nuclear energy  (20-22%), natural gas (27%), coal (26%), and oil (3%). 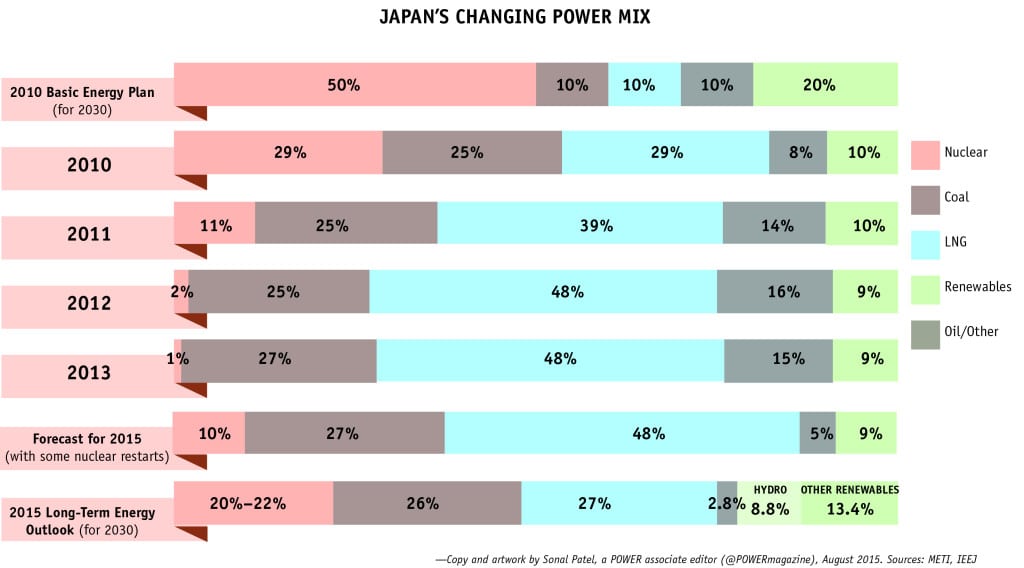 But achieving the desired 20–22% share from nuclear power by 2030 may not be so easy. The country will need at least 30 to 35 GW of nuclear power capacity, said Japan’s Institute of Energy Economics (IEEJ), and if nuclear plant lives are limited to 40 years, that may mean that only 20 GW out of the present capacity will still be online by 2030.

At least three measures will be integral to success, according to the Japanese Atomic Industrial Forum (JAIF): enhancing facility utility factor; extending operating time (which is currently at 40 years); and promoting the replacement of older nuclear power plants. This is what a mid-2015 poll of 11 power utilities, 258 mining and manufacturing firms, and 11 trading firms showed are the most important factors required to maintain the nuclear power industry (Figure 4). 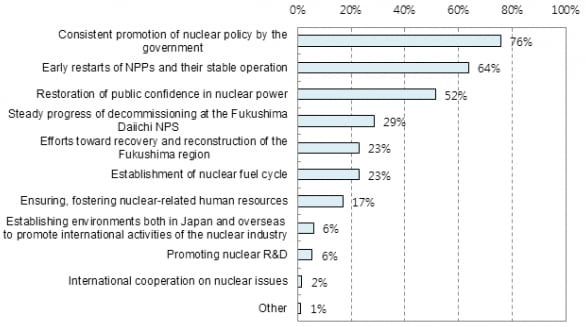 Finally, it will need to deal with what some experts deem is a pressing concern: reconstruction of its fuel cycle policy. In November 2015, a working group on nuclear business environment development compiled an interim report calling for a government-controlled corporation to replace private entity Japan Nuclear Fuel Ltd. and take over reprocessing spent nuclear fuels. This year, Japan’s legislative body will consider a bill for transferring the nuclear fuel reprocessing business.

The government also amended its process for selecting a site for geological disposal of high-level radioactive wastes in 2015, requiring consent from local governments. At the same time, it is pushing forward development of its Monju fast breeder reactor, outlining plans to identify an entity that will operate Monju in 2016.

On the global front, members of the Organisation for Economic Co-operation and Development’s Nuclear Energy Agency (NEA), at least, have implemented lessons learned from the Fukushima accident, including enhancing safety on many fronts. However, challenges remain. “The one thing that is most difficult to enhance is one of the most important components of a nuclear power plant and that is the people,” William D. Magwood IV, NEA director-general, said on February 29.

Meanwhile, the catastrophe has weighed down the growth of nuclear power worldwide. While safety has been paramount, the world currently has 442 nuclear reactors in operation, with 384 GW installed and 66 reactors under construction, says the IAEA’s Power Reactor Information Systems.

Between 2010 and 2015, about 27 GW of new nuclear capacity came online worldwide. But owing to safety concerns in the wake of the Fukushima disaster—as well as cheap natural gas, market economics, and age—an unprecedented 22 GW was permanently shut down (see POWER’s “Nuclear Spins” BIG PICTURE infographic in our December 2015 issue). 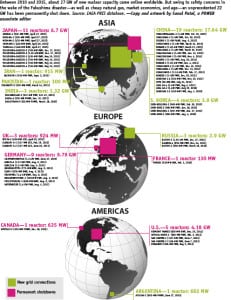