Nearly two years after Japan’s last nuclear power plant was shut down for safety checks, Kyushu Electric Power Co. has started up the 890-MW Sendai-1. The event marks a significant milestone for the country’s nuclear sector, which was crippled by the Fukushima disaster in 2011.

Kyushu started up Sendai-1 at 10:30 a.m. local time and said it expects the reactor to achieve criticality at around 11 p.m. The reactor will resume power generation on Aug. 14, gradually increasing output. If the reactor passes an integrated performance test performed by the Ministry of Economy, Trade, and Industry (METI) in September, it will then begin commercial service.

The first of 43 operable Japanese nuclear reactors that are mostly expected to start coming back online over the coming months and years, Sendai-1 will also be the first plant to operate under new standards put into effect in July 2013 by the Nuclear Regulation Authority (NRA). The agency established in the aftermath of the Fukushima disaster suspended Sendai-1’s operation four years ago—since May 2011. Japan’s last reactor, Ohi-1, was shut down in September 2013.

According to the Japan Atomic Industrial Forum, approval of the reactor’s restart required an assessment of the effects of the many active volcanoes within a 160-kilometer radius of the plant. The NRA only approved a construction work plan for the reactor on March 18, 2015. Fuel assemblies were loaded into the reactor from July 6 through 10, and drills on the prevention of severe accidents were carried out from July 27 through 30.

“The NRA urges the company to be more alert than ever, and to secure safety,” said agency chair, Shunichi Tanaka, regarding the increase of output at the Sendai-1.

The World Nuclear Association said in a statement that the restart showed Japan “is committed to creating a better future.”

METI approved proposed changes to the nation’s long-term energy vision on July 16, after years of debate and consultation. 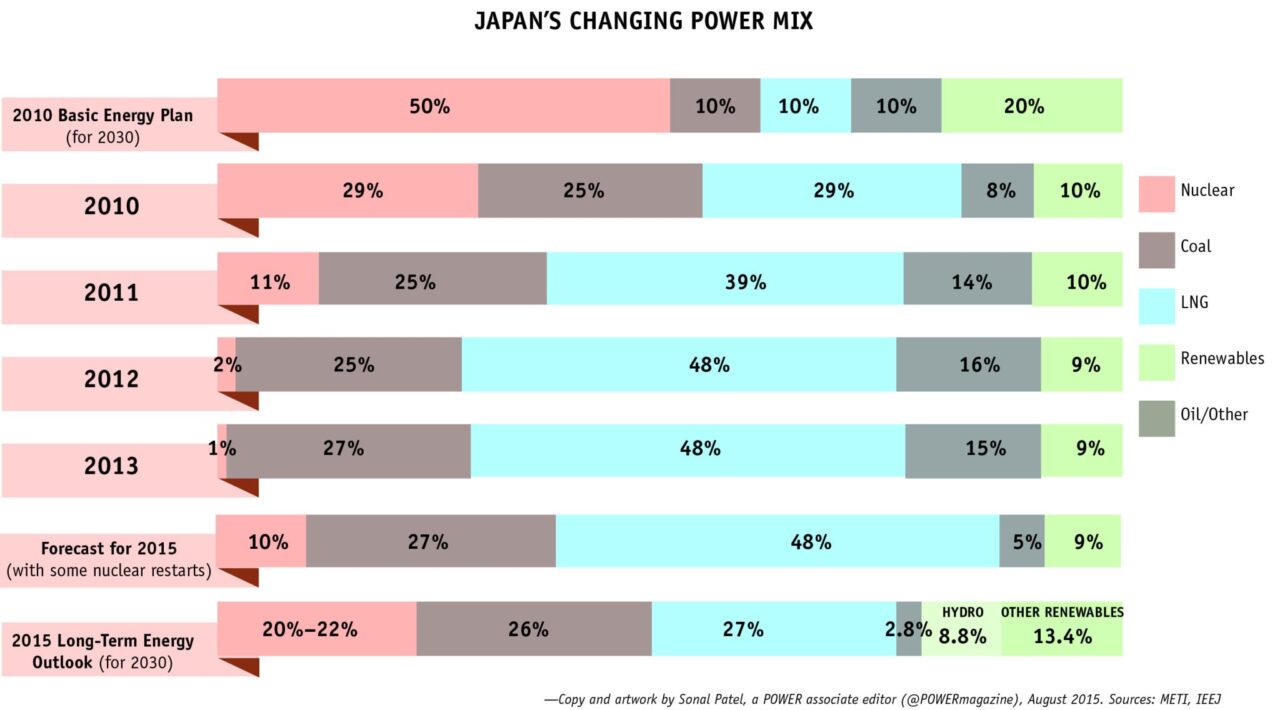 The plan’s finalization comes on the heels of Prime Minister Abe’s announcement that Japan will seek to reduce greenhouse gas emissions, including energy-related carbon dioxide, by 26% from 2013 levels by 2030.

But whether Japan will achieve its goals remains to be seen. “Not a single one of the factors—the extremely ambitious targets and forecasts for energy conservation, power generation mix, and economic growth—is easily achievable,” said the Japanese Institute of Energy Economics in a recent analyses. “If the reduction of electricity demand or the growth of non-thermal power generation does not proceed as expected, which type of thermal power generation will fill the gap?”