Seven years have passed since the world’s first low mass flux vertical tube once-through furnace was put into operation by Doosan Babcock at the Yaomeng Thermal Power Plant Unit 1 in China. That boiler replaced a boiler of another design that had become unreliable. The operating experience with the Posiflow design has been so positive that the owner has since ordered and commissioned a replacement for Unit 2’s boiler. Here’s what makes this furnace design unique.

Europe has seen an increase in demand for new coal-fired power stations over the past few years — no doubt spurred by an aging coal fleet in Western Europe and increased power demand in Eastern Europe. Many of the new coal-fired plants use supercritical boiler technology with a spiral wound furnace design. Future coal-fired power stations are considering even higher steam conditions to increase plant efficiency in order to reduce CO2 emissions per megawatt-hour produced.

Spiral wound furnaces have tubes that are wound at an angle of 10º to 25º around the furnace perimeter from the lower furnace inlet headers to above the burner zone. This arrangement means that each tube in the furnace passes through the various heat zones so that the heat absorption for adjacent tubes is reasonably uniform (Figure 1). 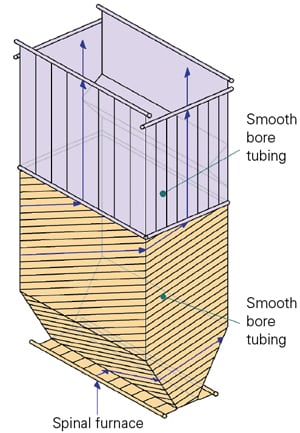 1.    Improved furnace design. The typical spiral wound boiler uses tubes set on an angle of 10º to 25º from horizontal in the lower furnace section and vertical tubes in the upper furnace. Source: Doosan Babcock

A high mass flux (mass flow across a unit area expressed in units of kg/m2s) is required to maintain effective heat transfer across boiler load range as well as to avoid stratification of water and steam at minimum furnace flow. The potential of stratification or inadequate heat transfer at low loads limits the minimum once-through load (Benson load) of spiral furnaces. Also, high mass flux causes a high pressure drop in the tubes, which means feedwater pump power draw is correspondingly high.

Figure 2 illustrates a flow response calculated for various heat absorptions for a boiler wall circuit with a high mass flux, spiral wound furnace. The left graph shows that the dynamic loss (or friction loss) component is much greater in magnitude than the static loss (or hydrostatic loss). The graph to the right shows that the result of an increase in heat absorption is a reduction in tube flow. Taken together, the images in Figure 2 illustrate that furnace wall tube metal temperatures are adversely affected as tube flow is reduced when there is an above-average heat supply. 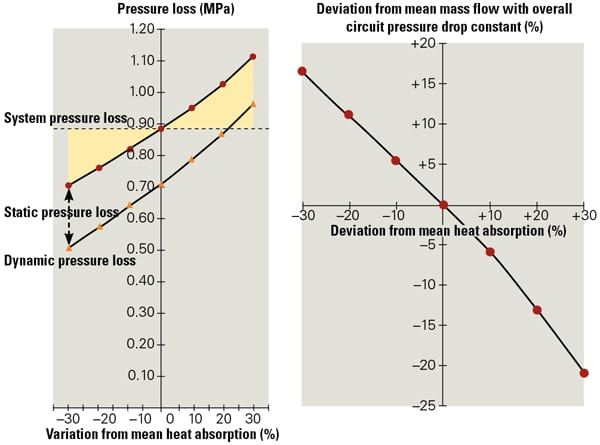 2.    Negative flow response characteristic for a high mass flux system. The data were taken from a high mass flux design boiler operating at 100% MCR with a water mass flux of 1,800 kg/m2s. In this design, water flow must decrease with higher heat input to maintain system pressure loss. Source: Doosan Babcock

For spiral wound furnaces, response time is restricted by the way the furnace is supported. Because spiral wound tubes can not support their own weight, vertical support straps are required on the outside of the furnace. Thermal stresses between the tubes and the support straps limit the start-up speed of the boiler as the strap temperature lags behind the tube temperature.

The ideal furnace design would have vertical tubes and be capable of variable pressure operation over the load range while exhibiting natural circulation flow characteristics with flow increasing as heat absorption increases, thus preventing high temperature differentials between adjacent tubes. As just described, the high mass fluxes required by the vertical tubes used in the old universal pressure boilers do not have this helpful characteristic. Typically, T12 tube material is used for subcritical spiral tubes and T24 for ultrasupercritical ones.

Figure 3 illustrates the flow response calculated for a low mass flux system, also called a Posiflow boiler. The graph on the left of Figure 3 shows that the dynamic loss component is now small compared to the static loss. The graph on the right shows a positive flow characteristic where tubes with above-average heat absorption have an increased flow and tubes with below-average heat absorption have a decreased flow. An advantage of the low mass flux system is a reduction in pressure loss through the furnace so that the feed pump power is reduced and cycle efficiency is correspondingly increased. 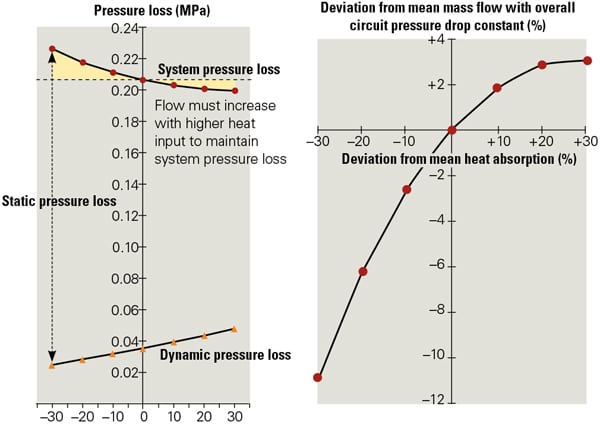 In the high heat flux areas of the boiler a condition called departure from nucleate boiling (DNB) is possible. DNB occurs when a steam film separates the water from the tube wall, as shown in Figure 4. The result is an undesirable spike in tube metal temperatures because steam has a lower thermal conductivity than water. The optimized ribbed tubes of a Posiflow boiler either limit the potential for DNB occurring or reduce the peak metal temperature if it does occur. 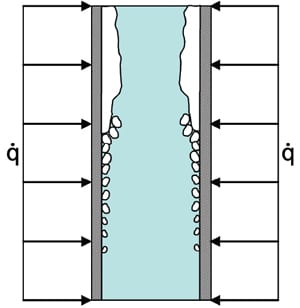 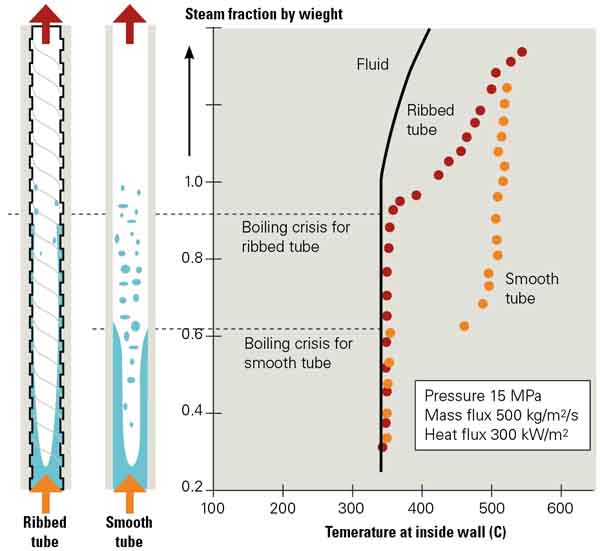 Given these fundamental furnace design features, the Doosan Babcock furnace design for a typical 800-MW Posiflow boiler is lighter by 386,000 kg, has about 4,000 fewer welds, and will require close to 50,000 fewer construction hours to erect than a typical 800-MW universal pressure boiler (Figure 6). The vertical wall panels are also much easier to fabricate, thereby reducing manufacturing cost. Another advantage: The Benson load can be lower for a Posiflow boiler, which leads to smaller start-up systems that could eliminate the need for a recirculation pump. 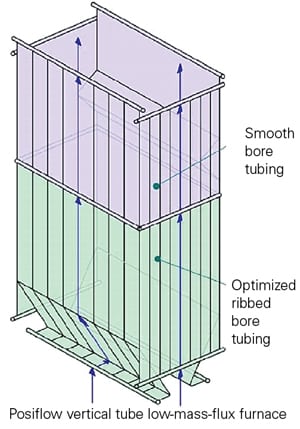 Yaomeng Power Plant is situated in the central southern area of Henan Province, China. The plant consists of four 300-MW units. Units 1 and 2 entered service in the mid 1970s and were the first domestically designed, coal-fired boilers of this size to operate in China. Units 3 and 4 followed during the mid-1980s.

The original boilers were universal pressure type, once-through units designed for baseload operation. They were designed to generate 935 metric tons/hour main steam at 570C. Beginning in 1992, output was reduced to between 230 MW and 270 MW. The upper limit was reduced due to overheating of superheater surfaces and turbine constraints. The lower load limit was imposed because temperature differences between adjacent tubes at low loads caused pressure part failures and regular outages.

These operating restrictions and the expectation of new emissions regulations led the owners, Yaomeng Power Generation Ltd. (YPGL), into discussions with Doosan Babcock about a potential boiler retrofit.

The unit’s concrete structure and the tight plant site limited the available retrofit options. YPGL elected to retrofit Unit 1 with the world’s first commercial low mass flux vertical tube Benson boiler. Yaomeng 1 was successfully recommissioned in May 2002. YPGL has since ordered a second Posiflow boiler for retrofit of Unit 2 that began commercial service in October 2009 (Figure 7). 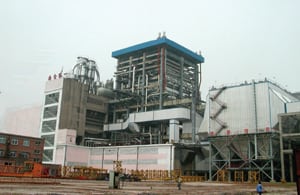 7.    After the boiler upgrades. This is the Yaomeng Power Plant after the second boiler replacement was completed in October 2009. Courtesy: Doosan Babcock

The success of the Yaomeng 1 retrofit can clearly be seen through the improvement in unit availability and the unit’s ability to rapidly change load. Before the retrofit in 2000, unit availability was 88.7%. Average availability since 2002 has been 95%, with the majority of the downtime attributable to planned outages. Boiler ramp rates improved from 1%/minute to 3%/minute.

Even though Yaomeng Unit 1 was the first Posiflow unit in China, there have been no ribbed tube failures caused by overheating or high temperature differentials of adjacent tubes in seven years of operation. Furnace temperature data are recorded using 106 thermocouples that are strategically located on the furnace walls. The metal temperatures recorded are within design and will provide full tube life. Also, the temperature difference between adjacent tubes has been reduced from 70C to between 20C and 30C. As a result, no boiler wall tubes have failed, and the unit can now reduce load to 40% without oil-firing assistance — something never achieved with the original boiler.

In a once-through subcritical boiler like that used on Yaomeng Unit 1, there is no steam drum. As water passes through the furnace, it evaporates entirely into steam. At Yaomeng this transition occurs in the low heat flux region, where the tube metal temperature increase is minimized. The water purity has to be high to avoid corrosion, deposition, and carryover of dissolved solids.

Yaomeng Unit 1 uses a hydrazine, all-volatile water treatment system. An all-volatile water treatment is not normally used for once-through boilers, but because of the presence of copper alloys in the Yaomeng condensate system, other options were not available. For new-build once-through projects without copper in the condensate system, Doosan Babcock would use oxygenated treatment during normal operations and an all-volatile treatment during start-up and shutdown — a "combined treatment." Combined treatment reduces the speed of deposit buildup and increases the time between acid cleaning.

As the ribbed tubes have an optimized profile, YPGL questioned how the positive flow response would be affected by potential deposit buildup. It can be inferred that positive flow response is still active if it can be shown that metal temperatures have not risen above material limits and tube failures caused by adjacent tube temperature differences do not occur even if there is a high deposit weight density.

YPGL made the decision to acid clean the unit during the 2008 outage. Tube samples containing internal deposits were removed from the high heat flux areas of the furnace to determine deposit thickness in July 2008. The tubes were then arranged by firing side and nonfiring side. The firing side of the tube clearly shows deposit buildup on the ribs of the furnace wall tubes before acid cleaning (Figure 8). The buildup on the nonfiring side on the right shows a more uniform distribution of deposit. 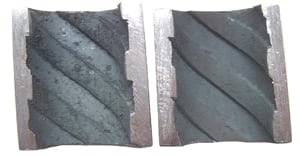 This internal tube deposit was analyzed during every outage to determine the deposit weight density.

Figure 9 shows the results of the acid cleaning. No oxidation deposit is visible on any part of the ribbed tubing. 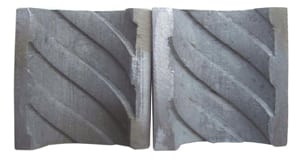 9.    After acid cleaning. These photos show the firing side and nonfiring side of furnace wall tubes after the July 2008 acid cleaning. No oxidation deposits are visible on the ribbed tubing. Source: Doosan Babcock

Doosan Babcock currently recommends acid cleaning a subcritical boiler at a deposit weight density of 400 g/m2. The Yaomeng Unit 1 results after six years of service show that the ribbed tube metal temperatures were within design limits despite a deposit weight density above recommendations. Also, no furnace tubes failed, so it can be inferred that a positive flow response was still active.

China’s large resource of anthracite coal ensures this coal’s place in China’s fuel mix for power generation for many years to come. The next development step for Doosan Babcock was to prove that the Posiflow furnace design was equally applicable when firing this coal. Previously, downshot boilers were limited to burning anthracite at subcritical cycles because the octagonal lower furnace and burner arches would have been difficult to construct with a spiral furnace arrangement. With Posiflow, supercritical downshot boilers are now possible.

Two new units using the Posiflow design began construction in China during 2009. These two 600-MWe units are designed to operate at supercritical steam conditions of 255 bar and 571C (Table 2). 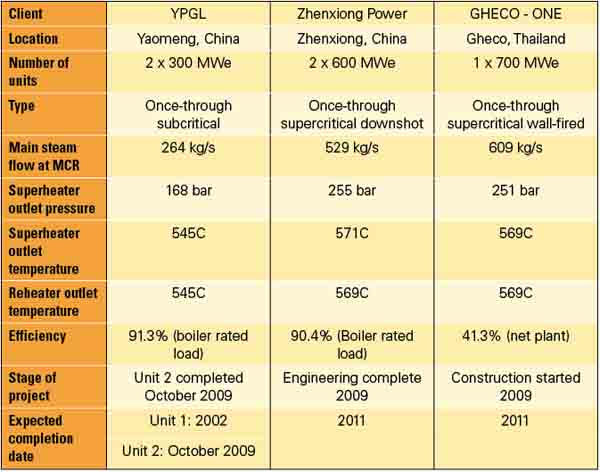 Doosan Heavy Industries (DHI), in conjunction with Doosan Babcock, also is now constructing a once-through supercritical 700-MWe unit for GHECO-ONE, part of the Suez Group. The Gheco Power Plant was ordered by Electricity Generating Authority of Thailand through international bidding that attracted keen interest globally. Gheco will be Thailand’s first supercritical power plant of this capacity and is being constructed at Map ta Phut, 150 kilometers southeast of Bangkok. DHI worked closely with Doosan Babcock to apply the Posiflow low mass flux vertical tube technology to this project. DHI is scheduled to complete the construction and test operation of the power plant in 2011.