It marks the first time the EPA has updated an existing program to address interstate transport of air pollution under a new air quality standard.

Last November, however, the EPA proposed updates to the rule with the intent of slashing more NOx emissions from power plants in the eastern half of the U.S. by reworking CSPAR to address compliance with the March 2008–issued NAAQS, which sets an 8-hour standard at 75 parts per billion (ppb). Today (September 7), it finalized that rule.

The “Final Cross-State Air Pollution Rule Update for the 2008 NAAQS” reflects stakeholder input and more than 15,000 comments received during the public comment process for the proposal, a public hearing, and a July 2015 Notice of Data Availability, the EPA said in a statement. 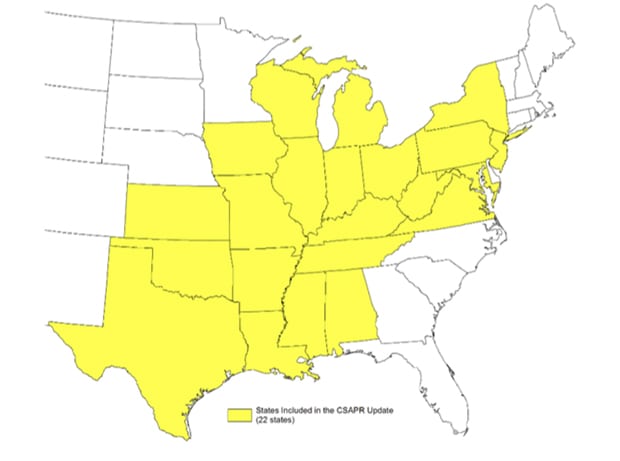 States will be allowed to replace the FIPs starting in 2018 by submitting state plans that adopt the CSAPR update trading program budgets.

According to the agency, the rule could cost an estimated $68 million, a figure that will be likely disputed by industry. However, those costs will be outweighed by benefits of up to $880 million in 2017, the EPA suggested. It estimated that in 2017, this rule and other changes already underway in the power sector would help slash ozone season NOx emissions by 80,000 tons—a 20% reduction from 2015 levels.

The EPA noted that while it strengthened its ground-level ozone NAAQS last October from the 2008 limit of 75 ppb to 70 ppb, the updated CSAPR rule is not meant to address the 2015 NAAQS rule. “While reductions achieved by this final rule will aid in meeting and maintaining the 2015 standard, the CSAPR Update to reduce interstate emission transport with respect to the 2008 ozone NAAQS is a separate and distinct regulatory action and is not meant to address the [Clean Air Act’s] ‘good neighbor’ provision with respect to the 2015 ozone NAAQS final rule,” it said.

The new rule, meanwhile, addresses the 2014 Supreme Court decision that led the D.C. Circuit in July 2015 to remand Phase 2 ozone season NOx budgets for 11 states to the EPA for reconsideration.

The EPA moved to withdraw the budgets, but it set new NOx emissions budgets for eight of the 11 states (Maryland, New Jersey, New York, Ohio, Pennsylvania, Texas, Virginia, and West Virginia) to address interstate transport with respect to the more stringent 2008 ozone NAAQS.

The agency took no new action on the budgets of three of the 11 states (North Carolina, South Carolina, and Florida) because, it said, “modeling for the final rule indicates that under the 2008 ozone NAAQS, these states do not contribute significantly to ozone air quality problems in downwind states.”