The intensifying spotlight on renewable energy seems to be casting a brighter light on the energy storage problem, with lawmakers, researchers, and investors scrambling to seek out the most feasible solution to bridge the intermittent nature of renewable power sources. This June, U.S. Sen. Ron Wyden (D-Ore.) introduced the Storage Technology of Renewable and Green Energy Act of 2009, a bill that would issue a 20% tax credit for investments in energy storage systems. If passed, the proposed legislation will also provide credits to storage technologies such as water reservoirs, flywheels, hydrogen production, or grid-connected batteries.

The bill would certainly boost growth in the U.S. energy storage market. But even without government incentives — driven primarily by venture capital investment — the global market is poised to grow from $329 million in 2008 to a stunning $4.1 billion by 2018, Pike Research says in a recent report. About a dozen technologies that are vying for a piece of the utility-scale energy storage market will be favored, especially advanced battery technologies such as lithium ion and sodium sulfur batteries, pumped hydro, and compressed air energy storage, the group concludes.

Researchers around the world, meanwhile, are reporting breakthroughs on existing and novel technologies. The University of St. Andrews in the UK, collaborating with colleges from Strathclyde and Newcastle, in May claimed to have designed a new type of air-fueled battery that can provide up to 10 times the energy storage when compared with designs currently available.

The STAIR (St. Andrews Air) cell capacity is based on rechargeable lithium batteries, which are currently composed of a graphite negative electrode, an organic electrolyte, and lithium cobalt oxide as the positive electrode. Instead of lithium from the layered intercalation compound (lithium cobalt oxide), the STAIR uses a porous carbon electrode. The oxygen, which will be drawn in through a surface of the battery exposed to air, reacts within the pores of the carbon to discharge the battery. The university has discovered in the course of its four-year study that the carbon component’s interaction with air can be repeated, creating a cycle of charge and discharge (Figure 6). 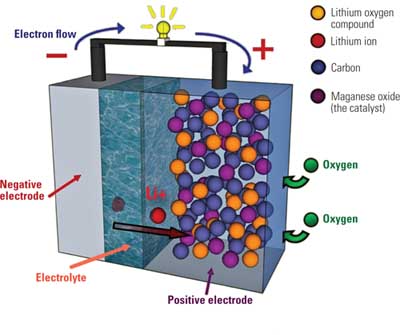 Initial results from the project found a capacity to weight ratio of 1,000 milliamp-hours per gram of carbon (mAh/g), while recent work has obtained results of up to 4,000 mAh/g, the researchers said. The researchers expect that the battery is about five years away from commercial availability, however.

In May, a Canadian research team at the University of Waterloo reported it had laid the groundwork for a lithium-sulfur battery that could store and deliver more than three times the power of conventional lithium ion batteries. As reported in the online issue of Nature Materials, the team overcame the challenge of keeping the electrically active sulfur in contact with a conductor, such as carbon. The team chose — at a nanoscale level — a member of a highly structured and porous carbon family called mesoporous carbon.

Filling the tiny voids then proved simple: Sulfur was heated and melted. Once it came into contact with the carbon, it was drawn or imbibed into the channels by capillary forces, where it solidified and shrunk to form sulfur nanofibers. Scanning electron microscope sections revealed that all the spaces were uniformly filled with sulfur, exposing an enormous surface area of the active element to carbon and driving the exceptional test results of the new battery. The research team continues to study the material to work out remaining challenges and refine the cathode’s architecture and performance.