Continuing a drive that has seen it retire almost 7 GW of coal capacity across its fleet since 2007, Duke Energy rang in the new year with two new advanced combined cycle plants in North Carolina; a third is set to begin operations later this year.

The H.F. Lee Plant near Goldsboro and the Dan River Combined Cycle Station in Eden officially began operations at the end of 2012, representing a combined investment of about $1.5 billion. The approximately $600 million Sutton Plant near Wilmington is projected to come online by the end of 2013. All three are replacing smaller, decades-old, coal-fired facilities.

The Lee and Dan River plants join Duke’s new 620-MW Buck Combined Cycle Plant, which began operations at the end of 2011 and likewise replaced a coal-fired plant on the same site.

Duke is in the midst of a $14.5 billion fleet modernization program that includes both new plants and upgrades to existing units to increase efficiency, reduce costs, and lower emissions across its service area. In addition to investing nearly $6 billion in new plants since 2007, Duke Energy has invested another $7.5 billion for plant upgrades. The improvements have reduced its emissions of sulfur dioxide by 74% and nitrogen oxides by 57% since 2005.

The 920-MW H.F. Lee Plant reached commercial operation on Dec. 31 (Figure 1). The new facility will be joined with the 863-MW Wayne County Energy Complex, which consists of five combustion turbines built in 2000, to form the H.F. Lee Energy Complex. 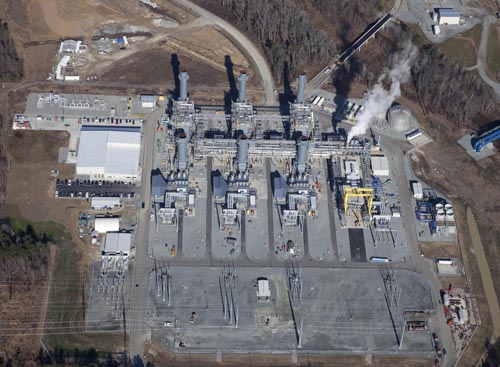 The $723 million plant was engineered and constructed by Kiewit and TIC–The Industrial Company. The project also required a 38-mile pipeline built by Piedmont Natural Gas to supply the facility from the Williams Transco. 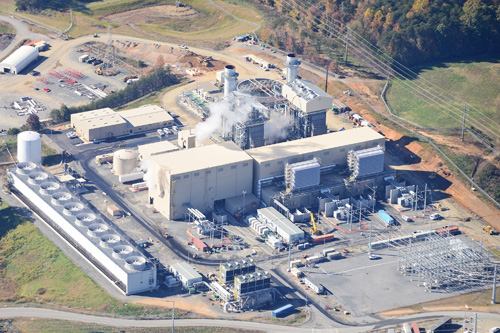 The $720 million Dan River station was engineered and constructed by Baton Rouge–based Shaw Group. The plant comprises two GE 7FA gas turbines feeding two Vogt HRSGs and a single GE steam turbine. The gas turbines have low-NOx burners, and the HRSGs are equipped with CO catalyst and selective catalytic reduction (SCR) for emissions controls. Each unit has a continuous emissions monitoring system and is equipped with duct-firing capability and inlet chilling to produce additional output.

Both the Lee and Dan River plants were completed within budget.

Construction is also under way at the 625-MW combined cycle facility at the Sutton Plant on Cape Fear River near Wilmington. The existing three-unit 575-MW coal plant, which entered operation in 1954, will be retired when the new gas plant begins commercial operations by the end of 2013. The project is projected to cost just under $600 million.

The two-unit Sutton plant has a design similar to the H.F. Lee plant. Two dual-fuel Siemens FD4 combustion turbines will each feed a Vogt triple-pressure reheat HRSG with supplemental firing, including a diverter damper, allowing for simple cycle operation. A single 285-MW Toshiba steam turbine will complete the package. The gas turbines are equipped with dry low-NOx combustors, and the HRSGs include both SCR and CO catalyst for NOx and CO emissions control.

Like Lee, the Sutton plant is being built by Kiewit and TIC. Piedmont is currently spending $217 million to build a 128-mile pipeline that will connect the plant to the Williams Transco. It’s expected to be completed this summer.

The three projects represent a significant commitment on Duke’s part to modernize its fleet.

And, the shift to gas means big gains in environmental impact.

“Having a diverse mix of generating options allows us to reduce emissions, while still meeting our obligations to provide reliable, affordable service to customers,” said Duke spokesperson Erin Culbert. “These new plants enhance those capabilities and allow our fleet to become more agile with the flexibility that combined cycle plants provide.”