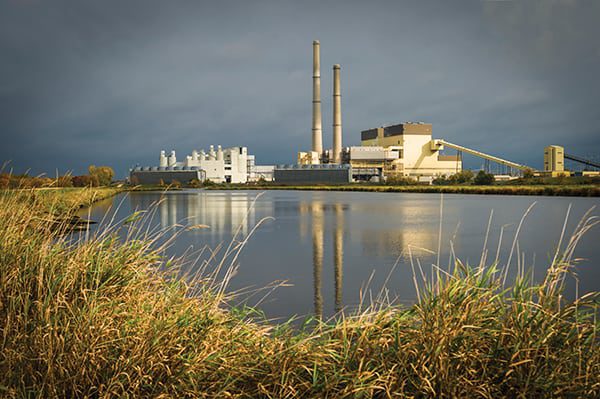 Alliant Energy and its co-owners are investing $900 million to modernize the Columbia Energy Center with a new suite of air quality control equipment and plant improvements that will increase its output and efficiency while reducing emissions. The plant makeover ensures its continued operation for decades to come.

In 2009, Wisconsin Power and Light Co., along with Columbia Energy Center (CEC) co-owners Wisconsin Public Service Corp. and Madison Gas and Electric, were faced with various environmental regulations affecting future operations of the 1,023-MW plant, located about 30 miles north of Madison. The two-unit plant was built in the mid- to late 1970s. Alliant Energy and its co-owners decided to invest in upgrades to improve CEC’s performance, reliability, and air emissions equipment so that the plant could continue to provide affordable and reliable power to its Wisconsin customers for many years to come. “This project will provide direct benefits to customers and is part of our overall energy resources strategy that puts a priority on investing in our newer and larger generating units,” said John Larsen, president of Alliant Energy’s Wisconsin utility.

The modernization of CEC is a multi-faceted program that includes air quality control system (AQCS) upgrades (completed in December 2014, representing the largest share of the overall investment, and the basis for this award), the addition of a selective catalytic reduction system to Unit 2 to reduce nitrogen oxide emissions (scheduled for completion by the end of 2018), and a long list of plant improvement projects. Other notable upgrades include replacement of both steam turbines and 12 pulverizers as well as other boiler improvements, which are expected to increase the plant’s operating capacity by nearly 10% and significantly reduce its heat rate (scheduled to be completed in 2017).

An application for a certificate of authority to construct the new AQCS facilities was filed April 2, 2009, with the Public Service Commission, and the permit was issued March 11, 2011, authorizing the $627 million project to proceed. Final air emissions construction permits were issued by the Wisconsin Department of Natural Resources in November 2011, allowing preliminary site work to begin in late February 2012.

In early April 2012, Black & Veatch Construction Inc. was fully released to complete engineering, procurement, and construction (EPC) services for the AQCS Retrofit Project, although its project support role during the permitting and major equipment specification phase had begun about two years prior. The groundbreaking ceremony on April 16, 2012, officially kicked off project construction.

Early work on the project, conducted “open book,” concluded in August 2012 with about 50% of the engineering completed, the critical procurement contracts awarded, and civil work under way. A “closed book” EPC contract was subsequently negotiated with Black & Veatch for the remainder of the work. The company’s approach to the design and engineering of this project was reminiscent of its excellent work on Wisconsin Public Service Corp.’s Weston 4 (the 2008 POWER Plant of the Year). HDR served as the owner’s engineer.

According to Bob Newell, Alliant Energy’s senior manager-strategic projects, “The basic plan was to get the emissions of sulfur and mercury down to about the 90% level of what it had been over the past several years [on each unit], and also to have minimal impact on plant operations.”

One of the major design challenges was arranging the new AQCS equipment so that the existing stacks could be used. Complicating the arrangement was the fact that different precipitators are used on each unit.

Unit 2 uses a “cold” electrostatic precipitator (ESP), which means the ESP is placed in the gas path after the air preheater (APH); then gas passes through two induced draft (ID) fans before entering the stack. After the upgrade, flue gas leaving the ID fans enters a common duct that evenly splits the gas flow between two SDA modules, two PJFFs, and two axial flow booster fans to compensate for the added flue gas pressure drop. Activated carbon injection occurs at the discharge of the ID fans. The gas exiting each axial booster fan is recombined into a single duct that directs the gas to the existing stack.

Unit 1’s gas path is similar, although it is configured with a “hot” ESP (the ESP is placed before the APH). The flow paths downstream of the ID fans are otherwise identical.

Ash collected from the ESP on both units is recycled and sold. Two SDA modules are used on each unit because of individual module size limitations. The AQCS additions at each unit also include a reagent preparation system, lime storage silos, scrubber solids handling and conveying system, a truck-based lime delivery station, and other ancillary equipment. The equipment arrangement includes provisions for future installation of lime delivery and scrubber solids removal by rail.

According to Jeff Kurtz, Black & Veatch vice president and project director, energy, “Safety was incorporated into every phase of the project at the Columbia Energy Center, and as a result, there were more than 1.9 million hours worked without a single lost time incident.” A site-specific, behavior-based safety program focused on making safe behaviors a focus of daily work practices to eliminate injuries at every step of the project. “We brought all of the contractor executives on site, having their buy-in to what the safety program would be,” said Kurtz. Every safety committee included representatives from Black & Veatch, Babcock & Wilcox, Alliant Energy, and all major subcontractors on the project.

Quality is another means to measure project success. Black & Veatch used its Living Quality Behaviors program, which is a behavior-based initiative that promotes face-to-face communications regarding quality issues. Only 12 non-conformance reports were issued on the project, all of which were resolved to Alliant Energy’s satisfaction. Change orders on the project were less than 0.5% of the total project cost, and final project costs came in at $38 million under the authorized Public Service Commission amount.

Schedule performance on this project was outstanding by any measure. All critical milestones were completed ahead of schedule, despite extreme cold weather conditions in Wisconsin endured during the winter of 2013/2014. Mechanical completion was 32 and 29 days early for Units 1 and 2, respectively, and substantial completion was 38 and 33 days early. Ductwork connections that tied-in the new AQCS equipment were completed during the plant’s normally scheduled spring 2014 outages, a short 42-day window during which the work was completed early. Final completion, which includes the contractually required performance and emissions tests, were successfully completed on February 5, 2015, almost two months in advance of the contract-mandated completion date (April 1) for each unit. The 60-day equipment reliability demonstration tests were later passed with excellent results: 99.0% and 99.7% for Units 1 and 2, respectively.

Not only will these upgrades save the plant from being shut down, but they also equip CEC to serve Wisconsin for many more years. ■