Three items appeared last week that make me wonder if The Onion is surreptitiously acquiring science journals and trade publications. Here’s what one, “ScienceNordic” says it does on its home page:

Our team of experienced science reporters and editors follow the regional scientific communities closely, and report constantly and relentlessly on the latest and greatest discoveries.

Surely one of the “latest and greatest discoveries” of our time! To wit: a Danish researcher, Lars-Georg Hersoug and his colleagues at the University of Copenhagen put six—count em’—six volunteers into rooms either with ambient carbon dioxide or elevated concentrations. After seven hours, they could eat whatever they wanted. Those who breathed higher CO2 ate six percent more. Call ScienceNordic!!

Yeah. This is what masquerades as environmental science these days. Allowing for an equal number of controls means that only three individuals were in each group. There is simply no way that these results have any statistical validity, but, hey, we’re talking about carbon dioxide, the death gas. Forget suing McDonald’s for obesity, Exxon-Mobil has a lot more dough!

Furthering my hypotheses about The Onion, you have to wonder if it has bought Geophysical Research Letters from the American Geophysical Union.

Huh? But, indeed, a recent edition of GRL contains a paper by Francina Dominguez of the University of Arizona (with three co-authors) on changes in winter precipitation for the western U.S. predicted by regional climate models. They compared the observed average and historical 50-year record daily rainfall to values simulated by eight climate models. Gaze and weep: 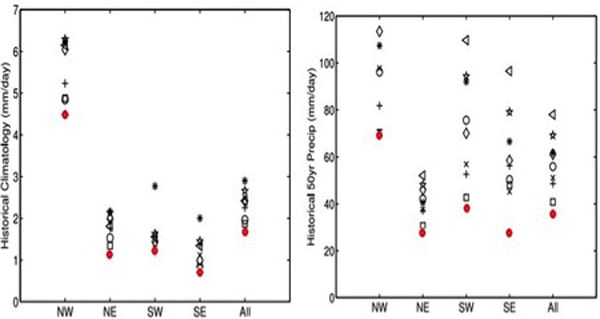 Area-averaged mean (left) and 50-year maximum expected daily rainfall (right) for four western regions plus the entire area (“all”). The black marks are the models and the red dots are reality. This is what climate model failure looks like.

Damn the data! Full speed ahead!! Despite the fact that the models don’t work, they go on to generate estimates of the differences in daily and extreme precipitation projected for the middle of this century compared to the recent past. This is not “useful” information. It is bad information.

People were horrified that the socialist dystopia in George Orwell’s 1984 employed sophisticated “science” for behavioral modification and social integration. S. Matthew Liao of New York University and two colleagues think such things in fact should be considered because global warming is so horrible.

They write in the journal Ethics, Policy and Environment, “our central aim here is to show that human engineering deserves consideration alongside other solutions in the debate about how to solve the problem of climate change”; they then propose some examples that they think are feasible, including

In an interview in The Atlantic, Liao vociferously asserted that he does not think that these changes should be mandated, rather he says they should be “modifications borne of individual choices”. In his paper he is a bit more specific:

As we envisage it, human engineering would be a voluntary activity — possibly supported by incentives such as tax breaks or sponsored health care — rather than a coerced, mandatory activity.

Excuse me, but charging people higher taxes for not taking a pill that makes them sick, for not aborting embryos that may become tall children, for not taking drugs to care about global warming, and for not limiting progeny is nothing but coercive.

Astoundingly, Mr. Liao argues that the nausea pill enhances liberty because people who want a steak will make decisions based upon that desire, rather than “truly deciding” to be coerced by a state-incentivized drug. In Mr. Liao’s world, like George Orwell’s, freedom is slavery.

Count me out on this one. Hopefully, The Onion or whoever will stop publishing papers providing “useful estimates” for engineers based on models that do not work. And while we are at it, we could actually take a little responsibility for our weight, instead of blaming Exxon-Mobile [sic].

—Patrick J. Michaels is a senior fellow in environmental studies at the Cato Institute. This commentary first appeared on Forbes.com and is reprinted by permission.