Shipments of coal to U.S. power plants in 2020 fell 22% year-over-year, according to data released May 13 by the U.S. Energy Information Administration (EIA). The agency said the U.S. power sector received 428 million short tons (MMst) of coal last year, the lowest amount since the EIA began publishing shipment data in 2007.

Thursday’s report also pointed to the ongoing decline of U.S. coal-fired power generation; federal data shows about 9.5 GW of coal-fired generation was shuttered nationwide last year, the fourth-highest total since 2009. The EIA last year said about 25% of the nation’s coal-fired generation capacity was retired in the past decade, including 48 GW of capacity between 2016 and 2020. 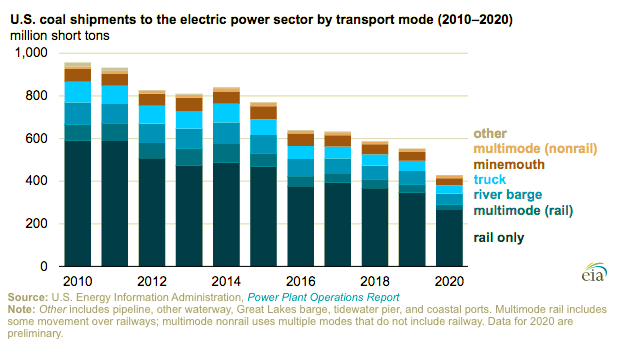 EIA has reported it expects 25 GW of coal generation capacity will retire over the next four years, a figure which does not include retirements announced since the beginning of this year. Research analysts have said as much as 50 GW of coal capacity could retire by the middle of this decade, leaving the country with about 175 GW of coal-fired generation capacity. Among the announced retirements is an 848-MW unit at the 3,250-MW Plant Scherer in Georgia, which has been the nation’s largest coal-fired power station in terms of capacity. Plant Scherer in 2017 was chosen as the Powder River Basin Coal Users’ Group Plant of the Year.

AEP Closing Half its Coal Fleet

American Electric Power (AEP) in November 2020 said it would shut down or refuel about half its coal fleet by 2030, a move emblematic of coal’s decline in the U.S. The utility at the start of 2020 had 12.1 GW of coal-fired generation capacity in its generation fleet, and plans to retire or refuel 5.6 GW this decade. About 70% of AEP’s fleet was powered by coal as recently as 2005.

The Ohio-based utility also is among those power producers transitioning to renewable energy resources, as costs for solar and wind power lessen and more cities and states set decarbonization targets.

AEP CEO Nick Akins in a recent quarterly earnings call said the company plans to build about 16.6 GW of renewable energy generation capacity this decade, with 10 GW of that total online by 2025. Akins on that call said, “It has been a very busy quarter for AEP, but the work really starts now regarding the execution of our plan to transform this company from what was the largest coal-fired utility to one of the largest regulated renewable companies in the U.S.”

Retirements are only part of the story for coal, though, as plants that are still online are operating at lower capacity factors. Government data shows the average annual capacity factor of U.S. coal plants fell from 62.8% in 2022 to 40.2% in 2020.

The EIA data published Thursday said that more than two-thirds of the coal delivered to the nation’s electric power sector last year came completely or in part by rail, with the rest “shipped by river barge, trucks, or other methods,” the agency said.

The agency said coal shipments by truck, and coal received by minemouth plants—coal-fired power plants built near coal mines—had a smaller decline last year than other modes of transport, dropping by 18% and 19% respectively year-over-year. It said waterway shipments of coal fell 20% from 2019, while rail shipments—the most common way coal is shipped in the U.S.—dropped 24%.

More information can be found in the EIA’s interactive coal data browser and the agency’s electricity data browser.