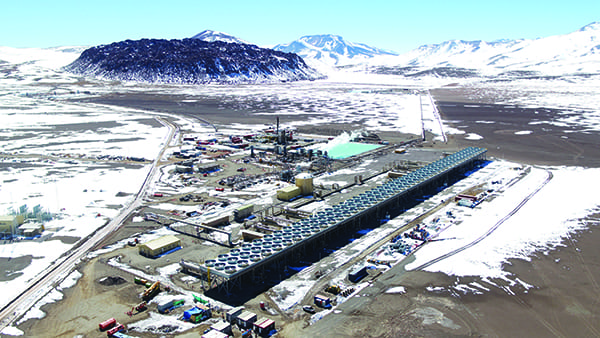 South America’s first and only geothermal power plant, the 48-MW Cerro Pabellón project, sits at an elevation of 4,500 meters above sea level in Chile’s harsh and remote Atacama Desert. Building and operating a plant in these extreme site conditions was no easy task. While it required keen organization and project innovation, it came online, on budget, and it has broken new ground for the continent that is rich in geothermal potential.

Why would anyone build a power project at an elevation of 4,500 meters (m) above sea level in the Atacama Desert? The wind-sculpted region that is sandwiched between the Pacific Ocean and the Andes Mountains in northern Chile is bone dry, and its temperatures vary to such extremes that only cacti and resilient grasses can survive. At an altitude of 4,500 m—far more than the human threshold for altitude sickness—the desert becomes even more brutal, characterized by a blistering sun by day, and strong winds, snow, and temperatures that often plummet to –22F (–30C) at night.

According to Guido Cappetti, general manager of Geotermica del Norte S.A. (GDN) who oversaw development and construction of the 48-MW Cerro Pabellón geothermal project so high up in the desert, the answer is multifaceted.

First, Chile is located in the Earth’s largest volcanic chain. Although the country has a sizable geothermal potential of more than 3,600 MW, geothermal power had never been a commercial venture in the entire continent of South America before GDN launched operations of the Cerro Pabellón project in June 2017.

Second, GDN is a joint venture between Chilean state-owned Empresa Nacional del Petróleo (ENAP), a state-owned hydrocarbon company that holds 15.37% of the project, and Enel Green Power, which holds the remaining 84.63%. While ENAP originally held a 49% share of the GDN venture, Enel Green Power, a subsidiary of Italian energy giant ENEL, took on a larger share to pursue the promising project, armed with vast geothermal experience and the necessary expertise, which it developed from years of building and operating geothermal power plants in Italy and in the U.S.

Third, the project, which is sited on an Andean plateau in the remote Ollagüe district of the Antofagasta region, was intended to supply power to the Chilean Northern Interconnected System—an area whose supply has mostly relied on coal, natural gas, diesel, and fuel oil for power—and benefit the region environmentally and economically. (In late 2017, the Chilean government interconnected the northern power grid to the central power grid, forming the National Electric System.)

And finally, but as crucially, the project promised to create jobs for local communities.

According to Cappetti, an industry professional with 40 years of experience in the geothermal industry, the decision to forge on with Cerro Pabellón was made after four geothermal exploration wells drilled between 2009 and 2010 made it possible to verify the presence of a geothermal reservoir with high values of temperature and permeability. The wells showed “great promise” for the development phase, he said.

From the outset, GDN worked diligently to map out the initial design, location, and interconnection to the power grid, along with project cost estimates, development timelines, and financial analysis, with the key aim to keep costs about $320 million. Careful planning was also especially critical because the project’s unique site would need specialized work conditions. This included a dedicated camp at an altitude lower than the project to house at least 700 construction workers. Work schedules, too, would need to be designed to protect workers from altitude sickness.

GDN settled on a camp location 3,850 meters above sea level, about 25 kilometers (km) away from the plant—and 120 km away from the nearest town. Today, the camp itself is outfitted with an innovative power supply system. Installed in 2017, ENEL built a “plug-and-play” microgrid comprising a 125-kW solar photovoltaic (PV) facility with two energy storage systems—one based on hydrogen and the other based on lithium—for a total storage capacity exceeding 580 kWh. ENEL noted that the microgrid can supply power 24 hours a day with “no need” for back-up generators (Figure 1).

The final Cerro Pabellón project design comprised two twin units with a capacity of 24 MW each. To guarantee enough steam to cover plant production and re-injection, the power plant is connected to 10 wells (six production wells and four reinjection wells) via pipelines that are 5 km long. The project also included construction of an 80-km 220-kV high-voltage transmission line that links the plant to Chile’s National Electric System.

The next step entailed ensuring the technology would function as designed in the site’s extreme conditions. “Due to the area’s logistical and climatic characteristics—including temperatures [as low as] –30C during the winter—high-enthalpy binary cycle technology was used,” said Cappetti. After a bidding process, GDN chose Ormat Technologies to serve as the engineering, procurement, and construction contractor for several reasons, including that Ormat had executed a geothermal power plant at an even higher altitude in the Himalaya part of China in 1993.

Ormat’s technology essentially involves a generation system that uses a secondary fluid in a closed circuit, which receives the thermal energy from the geothermal fluid without coming into contact with it, to feed the generation set. The decision to use binary technology with high-enthalpy geothermal fluid instead of traditional flash steam technology was based on the logistics and climate conditions of the area. It “assured total return of fluid to the geothermal reservoir so no water was outside the system,” Cappetti explained. Because the air at the site is very thin, which directly affects the plant’s air-cooling abilities, and the efficiency of the electrical equipment drops in high altitude, Ormat also adjusted configuration of the condenser and other electrical equipment. Another advantage offered by Ormat’s technology is that it is modular with prefabricated components, he noted.

But for Cappetti, the “adventure” really began when construction of the project started in July 2015. “The altitude of 4,500 m forces the human body to work at a lower speed, because there is less oxygen, and it is necessary to pay special attention to health and safety,” he noted. Because of the location, work was organized in 14-day shifts. “That’s to say, for 14 days, people worked, and for 14 days, they rested,” while work continued onsite with a new team. At the peak of project construction, about 1,600 people were employed, Cappetti said.

“You can imagine the staff engagement and coordination among the many skillsets and abilities… to get the project completed on schedule,” he said. “In addition to this, you can imagine all the coordination needed for transporting the major power plant equipment in this high-altitude remote location.”

Another major project achievement, according to Cappetti, concerned ensuring plant productivity. Because the project included construction of an 80-km transmission line, which required a lengthy timeframe, GDN needed to decide on the project’s size based on results from the first wells. Conventional practice dictates that pressure points of the wells are evaluated before a power plant’s capacity can be determined, he noted. In this case, “We decided from the beginning to install a 48-MW unit, and we signed all the contracts for the transmission line, for the drilling activities, for construction of the power plant before drilling the production and reinjection wells needed for the project,” he said. The foresight and determination paid off; GDN put the first 24-MW unit online in March 2017, and the second unit entered into operation on June 2017.

Though overcoming hurdles to build the project was challenging, GDN noted that one of its most remarkable achievements was to develop the project in dialogue with six surrounding indigenous communities in the remote Antofagasta region. The collaboration resulted in a long-term work strategy that included local workers, as well as encouraging the communities to offer services and supplies during construction, such as transport, laundry, and food.

“We also made a commitment to deliver permanent electric power to the surrounding communities,” said Cappetti. Development started in Toconce, with the installation of solar kits and lithium-ion batteries for the 90 families that live in the town. At Ollagüe (Figure 2), GDN “built a solar/wind hybrid plant that allows constant access to electricity, and [the community is] responsible for its operation and maintenance. In addition, the patrimonial and archaeological areas have been protected,” he said.

Meanwhile, the two-unit Cerro Pabellón project is set to be expanded. “After this first phase of development, the high geothermal characteristics of this reservoir in terms of temperature and permeability will allow an additional development with costs considerably lower than the previous one. Thus, it has been approved to build a third unit of 33 MW,” Cappetti said.

After that project is completed, GDN may explore expanding the project to a massive 100 MW, “which is the capacity of the transmission line,” he said. “In the next few years, we will be working to develop the potential of the region,” and that will mean a continued flurry of activity at Cerro Pabellón.

For now, GDN won’t explore other areas in Chile, even though they exhibit promise, because power prices, especially of solar PV and wind power, in Chile have plunged dramatically following the country’s introduction of competitive auctions for renewable energy. Developing more power capacity at Cerro Pabellón currently makes economic sense because infrastructure to transmit power already exists. GDN remains enthusiastic about taking on the challenges. “For us, we are proud to deliver this project. For us it was a fantastic adventure,” Cappetti said.

Editor’s note—This version reflects important corrections to the story published in the October 2018 print issue: ENAP’s original share of GDN was 49%—not the majority share, as POWER noted. The plant is connected to the National Electric System, which was formed when the Chilean Northern Interconnected System was integrated with the southern system in November 2017. Investment in the plant was $320 million, not $380 million. POWER regrets the errors.