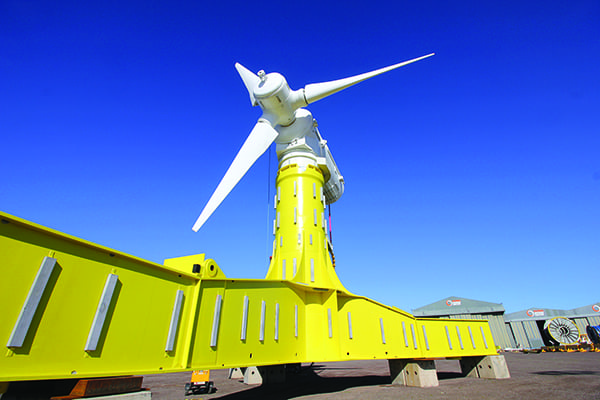 Though tidal energy is still considered by many to be in its nascent stages, power generated from turbines harnessing fast tidal flows in the same way wind turbines catch the wind has entered the commercial phase following the successful deployment of the world’s first commercial-scale array.

This spring, Atlantis Resources—now SIMEC Atlantis Energy (SAE)—announced that the construction and testing phase of its 6-MW MeyGen array had been completed. Now formally within its 25-year planned operational phase, since April it has delivered more than 8 GWh of energy to the national grid. Sited in the Pentland Firth, one of the most powerful tidal areas in the world, situated at the northern tip of the UK between mainland Scotland and the Orkney Islands, the array is a paradigm changer.

The inherent advantage of the tidal turbines centers around “the value of predictability, power density and environmental acceptability. Water is 800 times more dense than wind, so we use short blades, generating energy silently and unseen on the seafloor. Since we know when the tides will come, we can regularly produce an enormous amount of power,” said Cameron Smith, MeyGen’s director of business development and public affairs, in an exclusive interview with POWER.

Following extensive studies, SAE has estimated that in addition to the Pentland Firth, more than 100 GW of tidal capacity exists globally. Targeting further development in the UK, Scotland, France, and Canada, “we believe that tidal power can develop over 10 GW of capacity by 2030 on the back of what MeyGen has already achieved,” said Smith.

“SIMEC Atlantis is no longer just technically focused. We have proven that it works. We are now looking for a large-scale array to be built,” David Taaffe, director of Project Delivery with MeyGen, said at the All-Energy Exhibition and Conference held in Glasgow in May.

But perhaps the biggest hurdle that MeyGen has had to overcome was belief in the technology itself. “Getting those first four turbines out in the water was key,” said Smith. Quick to recognize his early supporters and investors, now that commercial operations have begun, “our next area of concentration is on cost reduction,” he said.

While their greatest strength is the predictability of the tidal resource, SAE’s goal is to be cost competitive with wind and solar. That will happen as it continues to scale-up over the next few years. Beyond winning over the hearts and minds of investors, key is instilling confidence both in the company’s operating skills and in the technology itself.

Now that MeyGen is regularly and successfully producing electricity, people are coming from around the globe to see it perform. “As the world’s first commercial tidal array, we know we’re in the spotlight,” continued Smith.

“Phase 1A of the project included the assembly, construction, installation, and grid connection of four 1.5-MW tidal stream turbines, one from Atlantis Resources and three from ANDRITZ HYDRO Hammerfest,” said Taaffe.

For almost a decade, the turbine machines were tested at the European Marine Energy Center in the Orkneys and other areas of Scotland. The data generated in this phase essentially validated the technology. For normal marine shipping, they are silent and invisible, presenting no complications for the ships that travel the well-plied lanes. Additionally, construction and maintenance techniques have been modified so as to have low impacts on marine life and ecosystems.

Strung out over a 3.5-kilometer site, each unit at MeyGen is fixed to the seabed via a gravity base (Figure 1). The modular, industrialized subsystems allow for easy maintenance and high quality. They are connected to the grid via an armored power export cable and the area is typically controlled via a supervisory control and data acquisition system.

Each rotor is between 18 and 20 meters in diameter, and blades have variable-pitch capability to optimize yield and minimize structural load. The modules themselves are developed in a way that allows rapid and simple deployment and recovery using a “stab and wet-mate” connection system. Each module’s yaw system helps rotate the nacelle to face tidal flow on each side. Multiple levels of redundancy and a variety of comprehensive monitoring systems maximize offshore reliability.

Each turbine is located on an individual foundation weighing between 250 and 350 metric tons (MT), coupled with six ballast blocks weighing 1,200 MT that provide horizontal stability over the lifetime of the turbine. Each turbine has a dedicated subsea array cable laid directly on the seabed and brought ashore via a horizontal, directionally drilled borehole within the foreshore bedrock.

“The machines are geared to provide technical and environmental information, which we need to optimize MeyGen’s next phase, when four further turbines will significantly increase output,” continued Taafe.

Phase 1A is designed to act as a precursor to the already approved 86-MW Phase 2 of the project. In the meantime, Phase 1B will involve the deployment of four more 1.5-MW turbines installed on innovative foundations. This segment of the project, scheduled to be realized through 2019, is a key enabler for future phases of deployment, by demonstrating the use of technologies that will significantly reduce the levelized cost of energy (LCOE) from tidal generation.

Currently, Phase 1A turbines feed into the onshore power conversion unit at the Ness of Quoys distribution network, operated by Scottish Hydro Electric Power Distribution through one of the longest 33-kV underground power export cables in the UK. Each turbine is equipped with environmental monitoring equipment that will assess the interaction between the tidal turbines and the marine environment including marine mammals. The results of the monitoring work will be used to inform subsequent phases of the project.

More reflective of their complementary relationship, the bladed tidal turbines MeyGen uses depend upon technology developed by the offshore industry. Overall, the project has greatly benefitted from the engineering capabilities gained through nearly 50 years of offshore oil and gas development, and new offshore fixed and floating wind installations.

“We borrow from the same suppliers for marine logistics, offshore wind, offshore oil and gas. The new Beatrice Windfarm suppliers, for instance, also helped to build some of our components,” said Smith.

A 2014 study undertaken by Oxford University and Edinburgh University showed that the Pentland Firth tidal flows could potentially generate enough power for almost half of Scotland’s total needs. With some of the most powerful tides in the world, “sites like the Pentland Firth are regarded as premier locations from which to harness the power of the ocean’s currents,” said Taaffe. “Despite their remoteness, these areas also have manageable water depths, proximity to a grid connection, adequate port and road infrastructure, and a supportive local community, all of which play important roles in the development of energy projects at scale.”

However, deploying in such sites come with inherent challenges. Equipment requires maintenance and must be removed and installed, tweaked or adjusted from time to time for the array to run at full efficiency.

“The best tidal energy sites are located in areas with the highest tidal flows. By nature, therefore, there are limited periods where the tide is slack, and hence, we must operate with small installation windows,” explained Taaffe. Over time, MeyGen has installed efficient mechanisms to deploy and recover the turbines in less than an hour. “The challenges now are around developing efficient marine working techniques,” he said. 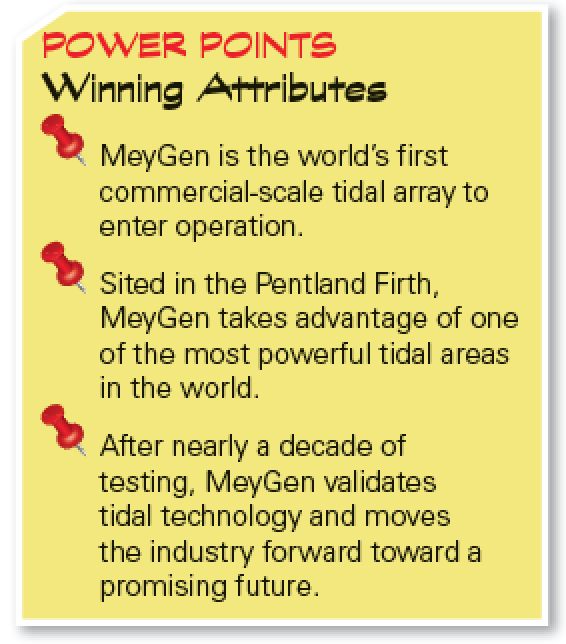 In Phase 1C, “we will put more turbines into the water, as the CFD [contract for differences] lines of support for power in the UK—the same used to support wind farms—are already in place. We have all the qualifications we need and will be able to bid in the next auction,” said Smith. However, as confident as Smith is, the British government has recently failed to support tidal projects and has not been as friendly to the sector as the Scottish home government. So, nothing is certain until the auction itself takes place.

Of course, one advantage SAE and MeyGen has over wind power is tidal power’s inherent predictability. “The power and regularity of the tides hangs on the moon. Unless this changes, unlike other renewables, we can predict with nearly absolute certainty when the resource will be there,” said Smith.

Going forward, SAE has laid out plans for MeyGen Phase 1C commencing perhaps as early as next year. According to public reports, the company plans to build an additional 49 turbines with a combined 73.5 MW at an estimated cost of £420 million as the array ramps up toward 100 MW.

The project will be transformational for the tidal energy industry, providing the necessary scale to justify the establishment of turbine manufacturing facilities at Global Energy’s facility in Nigg Energy Park. The company estimates Phase 1C will create 5,300 full-time roles, many redirected from the oil and gas sector, as well as significantly reducing the project’s LCOE.

In total, the MeyGen offshore lease permits up to 398 MW of capacity to be installed within the site. While presently MeyGen only has grid capacity for up to 252 MW, the site is capable of supporting the full project buildout. This implies a potential Phase 3 project of 146 MW that, subject to grid connection, turbine availability, and speed of installation, could commence in the next five years.

Going forward, SAE is also looking to significantly upscale to even more efficient 2- to 3-MW machines and beyond. “While there are limits at practical depths, as well as limits to the size of blades, because the water is so dense, we have other advantages,” said Smith. Beyond electrical generation, “we are also looking at integrating with storage,” he added.

As MeyGen ramps up over the coming years, hitting 100 MW will not only help it surpass another milestone, but will also help it take advantage of economies of scale. SAE’s developers believe learning rates achieved in the process will help them bring costs below those of offshore windfarms. They also expect additional innovations through the use of larger rotor diameters and turbines, reducing steel costs, and attaching multiple turbines to one cable. ■