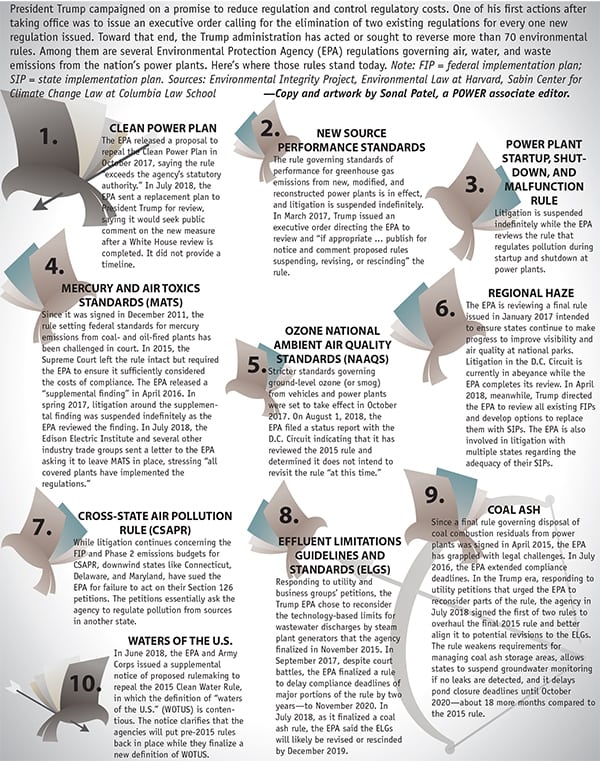 President Trump campaigned on a promise to reduce regulation and control regulatory costs. One of his first actions after taking office was to issue an executive order calling for the elimination of two existing regulations for every one new regulation issued. Toward that end, the Trump administration has acted or sought to reverse more than 70 environmental rules. Among them are several Environmental Protection Agency (EPA) regulations governing air, water, and waste emissions from the nation’s power plants. Here’s where those rules stand today. Notes: FIP = federal implementation plan; SIP = state implementation plan. Sources: Environmental Integrity Project, Environmental Law at Harvard, Sabin Center for Climate Change Law at Columbia Law School

The EPA released a proposal to repeal the Clean Power Plan in October 2017, saying the rule “exceeds the agency’s statutory authority.” In July 2018, the EPA sent a replacement plan to President Trump for review, saying it would seek public comment on the new measure after a White House review is completed but it did not provide a timeline.

The rule governing standards of performance for greenhouse gas emissions from new, modified, and reconstructed power plants is in effect, and litigation is suspended indefinitely. In March 2017, Trump issued an executive order directing the EPA to review and “if appropriate … publish for notice and comment proposed rules suspending, revising, or rescinding” the rule.

Litigation is suspended indefinitely while the EPA reviews the rule that regulates pollution during startup and shutdown at power plants.

Since it was signed in December 2011, the rule setting federal standards for mercury emissions from coal- and oil-fired plants has been challenged in court. In 2015, the Supreme Court left the rule intact but required the EPA to ensure it sufficiently considered the costs of compliance. The EPA released this a “supplemental finding” in April 2016. In spring 2017, litigation around the supplemental finding was suspended indefinitely as the EPA reviewed the finding. In July 2018, the Edison Electric Institute and several other industry trade groups sent a letter to the EPA asking it to leave MATS in place, stressing “all covered plants have implemented the regulations.”

Stricter standards governing ground-level ozone (or smog) from vehicles and power plants were set to take effect in October 2017. On August 1, 2018, the EPA filed a status report with the D.C. Circuit indicating that it has reviewed the 2015 rule and determined it does not intend to revisit the rule “at this time.”

The EPA is reviewing a final rule  issued in January 2017  intended to ensure states continue to make progress to improve visibility and air quality at national parks. Litigation in the D.C. Circuit is currently in abeyance while the EPA completes its review. In April 2018, meanwhile, Trump directed the EPA to review all existing FIPs and develop options to replace them with SIPs. The EPA is also involved in litigation with multiple states regarding the adequacy of their SIPs.

While litigation continues concerning the FIP and Phase 2 emissions budgets for CSAPR, downwind states like Connecticut, Delaware, and Maryland, have sued the EPA for failure to act on their Section 126 petitions. The petitions essentially ask the agency to regulate pollution from sources in another state.

Responding to utility and business groups’ petitions, the Trump EPA chose to reconsider the technology-based limits for wastewater discharges by steam plant generators that the agency finalized in November 2015. In September 2017, despite court battles, the EPA finalized a rule to delay compliance deadlines of major portions of the rule by two years—to November 2020. In July 2018, as it finalized a coal ash rule, the EPA said the ELGs will likely be revised or rescinded by December 2019.

Since a final rule governing disposal of coal combustion residuals from power plants was signed in April 2015, the EPA has grappled with legal challenges. In July 2016, the EPA extended compliance deadlines. In the Trump era, responding to utility petitions that urged the EPA to reconsider parts of the 2014 rule, the agency in July 2018 signed the first of two rules to overhaul the final 2015 rule and better align it to potential revisions to the ELGs. The rule weakens requirements for managing coal ash storage areas, allows states to suspend groundwater monitoring if no leaks are detected, and it delays pond closure deadlines until October 2020—about 18 more months compared to the 2015 rule.

In June 2018, the EPA and Army Corps issued a supplemental notice of proposed rulemaking to repeal the 2015 Clean Water Rule, in which the definition of “waters of the U.S.” (WOTUS) is contentious. The notice clarifies that the agencies will put pre-2015 rules back in place while they finalize a new definition of WOTUS.

—Copy and artwork by Sonal Patel, a POWER associate editor.