A coal-fired power plant operating in the western U.S. was experiencing short gearbox life in its coal-pulverizing operation. After an annual gearbox inspection, oil analysis results indicated that the AGMA 6EP (ISO 320) gear oil recommended by the original equipment manufacturer (OEM) had failed to provide adequate lubrication and protection. This conclusion was based on oil analysis results and gearbox inspection after one year of operation.

The plant’s pulverizer gearbox design dates back to the early 1960s. It consists of a steel worm gear driven by a large 800-rpm electric motor that drives a bronze bull gear directly connected to a grinding table. The sump holds 255 gallons of lubricating oil. Its temperature is controlled by an integral water-cooled heat exchanger. Unfiltered ISO 320 EP lubricating oil was recommended for lubrication of the bronze-on-steel gears and bearings.

Staff suspected that the wear patterns on the bronze bull gear faces were attributable to several factors, including high particulate loading of coal dust and dirt in the gear oil and catalytic reactions between the gear oil additives.

In addition, chemical attack of the EP additive package during operation was creating high levels of copper in the gear oil. Oil contamination from copper was most likely due to sulfur-phosphorus EP additive being active on the bronze bull gear.

It quickly became clear that these issues needed to be addressed. Plant personnel sought methods to better seal the gearbox from particulate infiltration, primarily in the form of coal dust. Likewise, great efforts were made to implement filtration methods and options for the lubricating oil to quickly capture particulates and generated wear particulates. An enhanced lubricant technology (both base oil and additive packages) was applied to enable extended maintenance intervals without incurring energy use penalties.

After a period of trial and error in which a variety of solutions were tested for effectiveness, success at breaking the wear chain reaction was achieved via controlling particulate ingress. The successful approach involved using breather desiccant filters mounted on the gearbox vents and paying very close attention to the grinding table seals. Initial ISO Cleanliness Code of 23/21/18 (per ISO 4406-1999) was achieved with aggressive breather filtration.

Prior to limiting particulate ingress, employees were unable to establish the target ISO cleanliness level due to the very high levels of particulates. Historically, the ability to filter ISO 320 and 460 gear oils in a coal-pulverization environment had proven very difficult. To address the gear wear issue, plant personnel determined that a kidney loop filtration system would be one of the better options for removing particulate contaminants from the pulverizer gearbox.

However, an effective kidney loop filtration system must have the following characteristics:

Advanced filtration technology that would meet the requirements for this application was determined to be readily available for heavy gear oil. An off-line kidney loop filtration package using a high-efficiency, high – dirt holding capacity, synthetic filter media was installed. It uses two filter housings mounted in series with a common sized element in both housings (see figure). 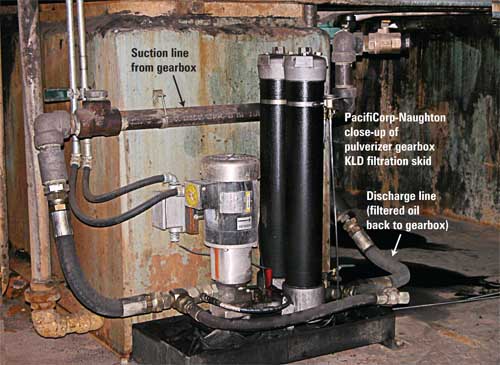 The filter elements initially recommended for the trial installation were rated at beta 25 = 200 in the first stage and beta10 = 200 in the second stage. Oil flow was delivered by a vane pump rated at 10 gpm for a 460 cSt (2,500 SUS) gear oil. Temperature ranges of the system fluid varied from a low of 65F (18C) when idle up to 130F (54C) during normal operation. The filtration package was installed with the suction line coming into the filter bank directly from the bottom of the reservoir and the outlet or filtered discharge line. It is piped directly into the top of the reservoir.

Currently, the filter element condition is monitored by differential pressure gauges installed on each filter’s housing. During normal operation the target is to keep the differential pressure across the filter between 25 to 28 psig. Other features of the filtration package include upstream and downstream sampling valves. These allow lubricating oil samples to be taken without having to shut down the system.

During the system update, it was recommended that an AGMA 6EP (ISO 320) lubricating oil for pulverizer gearbox be included in the system design. Evaluation of the wear patterns on the gear teeth indicated that the EP additive package in this lubricating oil was too active on the bronze bull gear. This, in conjunction with the contaminants in the gearbox, was causing premature wear and failing to provide adequate protection for the gears.

Analysis of used gears’ lubricating oil samples confirmed that the EP additive package was being depleted by extended contact between the steel-on-bronze gear face and sliding wear. Infrared thermographic imagery indicated that this extended contact between the two materials resulted in higher gear face temperatures. Very high dirt and particulate loading was confirmed by the ISO Cleanliness Code.

After consulting with the lubricant supplier, it was determined by all parties that AGMA 7 R&O (ISO 460) synthetic gear oil would best protect the gearbox in this application. The higher viscosity grade and improved lubricity of this synthetic gear oil, coupled with R&O additive chemistry, was able to provide higher oil film strength than that recommended by the OEM. As a result, synthetic oil would extend the life of the gearbox, taking into account the temperature requirements and gearbox longevity. The physical properties of the synthetic gear oil are shown in the table. 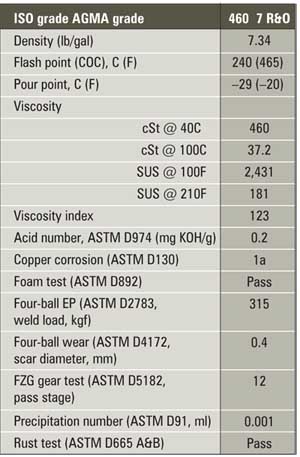 Prior to putting the pulverizer back into service, the gearbox was overhauled and, except for the steel/worm gears, all major rotating components were replaced. The steel worm and bronze bull gears were precision-aligned and blue-checked. In addition, the reservoir was flushed with an ISO 460 mineral oil and filled with the synthetic ISO 460 gear oil.

A baseline gear oil sample was drawn from the reservoir and analyzed for particle count per ISO 4406-1999, with ISO Cleanliness Code results coming in at 23/21/18. Finally, the pulverizer gearbox was put into service along with the filtration system. Following three hours of run time, the particle count was reduced to 21/19/11.

After 48 hours of run time, the plant installed a set of beta 5 = 200 filter elements to further reduce system contamination in each housing. This also achieved target ISO Cleanliness Code 18/15/11 more quickly. The pulverizer gearbox and filtration system continued to run for another two weeks with element condition being monitored using differential pressure gauges. As a result of using the 5-micron media during these two weeks, the target ISO Cleanliness Code 18/15/11 was reached.

Filter element service life was also monitored during the trial installation. Given the initial cleanup of the system, the results showed that the high dirt capacity media exceeded expectations. The actual service life has exceeded expectations. During the trial installation, oil samples were taken and analyzed for physical and chemical properties, particle count, and analytical ferrography. The results showed the wear metals were reduced significantly and the oil cleanliness was maintained.

Given the success of this initial installation, the power plant continues to reap the following benefits by using the ISO 460 R&O synthetic gear oil and a new filtration system:

By extending the life of the lubricating oil, this plant has reduced the disposal costs and environmental impact of the waste oil. In the fall of 2005 the plant upgraded a second pulverizer with synthetic oil and a filtration system.