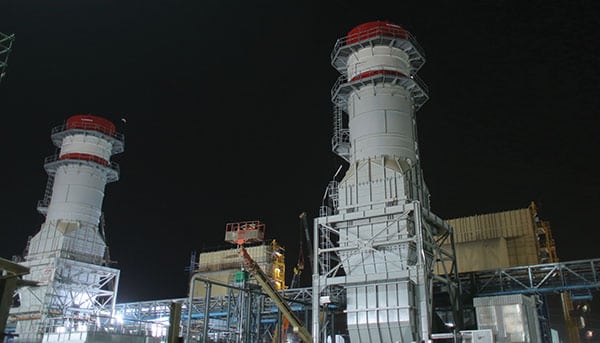 To alleviate chronic power shortages, the first gas turbine unit at this fast-tracked 640-MW plant was synchronized to the grid within a record-breaking 159 days—two days ahead of schedule.

The revolution in 2011 that ousted Egypt’s former long-time president Mohamed Hosni Mubarak, shattered the country’s economy, and the years of political transition that followed, paired with a recent bulge in its population growth rate, have overstretched Egypt’s infrastructure as well as its social services and environment. Particularly affected was its power sector, which was steeped in turmoil.

The country has suffered rolling blackouts, struggling to balance a sharp rise in electricity demand with inadequate generation, which was compounded by natural gas shortages, aging infrastructure, deficient transmission capacity, and unprofitable power pricing. But in 2014, in an attempt to bridge the chasm between power demand and supply, the government began to take urgent measures to scale up infrastructure spending to alleviate what had become a crippling electricity crisis.

First, it moved to liberalize energy prices and eliminate all subsidies by 2018. Then it paved the way for private companies to engage in power generation, a field dominated by government entities. It also rolled out a new energy strategy, calling for ambitious targets to boost its generating capacity to add 54 GW to its 2015 total installed capacity of 31.34 GW by 2022. In addition, the country sought to diversify its power supplies, outlining plans for 21 GW of new capacity from liquefied natural gas and other gas-fired plants, 12.5 GW from coal plants, 2 to 4 GW of new nuclear capacity, and more than 13 GW from renewables. And, to mitigate a more imminent power crunch, the government also issued a “fast-track” generation plan to add 3.6 MW before demand surged during the summer of 2015. 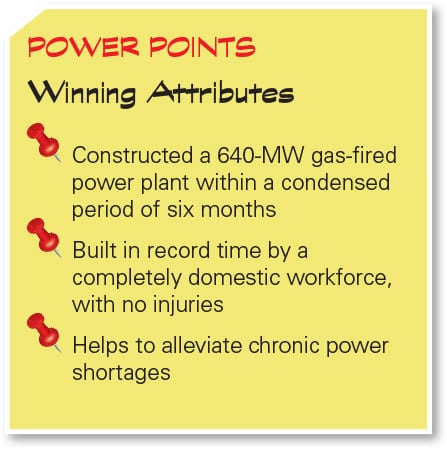 For Elsewedy Electric, a private company that has a number of segments in 15 countries and derives the bulk of its revenues from the manufacture of cables, the contract was a major award in terms of power generation in Egypt. It immediately tasked its subsidiary, Elsewedy Power System Projects (PSP), with engineering, procurement, and construction (EPC) for both plants.

The project scope for Attaqa also included civil, electrical, mechanical, piping, structural, architectural, and engineering works. In addition, the project required “advanced specialties,” including integrated automation processes and “strategic sourcing, material management, contract management, and all logistics aspects and the construction activities,” said PSP, which remains responsible for reliability for 24 months after delivering the units to their owner.

But Elsewedy also turned to Egyptian consulting firm Engineering Consultants Group (ECG) S.A. to oversee design review and supervise construction, explicitly to meet the tight schedule. To enable a quick start of construction, ECG said it “rapidly set up a task force involving senior staff to plan and meet the project’s staffing requirements and to immediately start the mobilization of personnel specifically appointed to meet the PSP milestones.”

Then in March 2015, it awarded German firm Siemens contracts to supply four E-class turbines, specifically designed for the 50 Hz market, to the Attaqa plant, as well as to test and commission the project and ultimately connect the gas turbine generator units to the national grid.

Elsewedy said it chose Siemens turbines for their high fuel flexibility and reliability, and especially for their “service-friendly design and suitability for all load ranges, particularly peak-load operation.”

By May 29, 2015—2.3 million workman hours later, and a mere 159 days after contract signing—the first 160-MW unit at Attaqa was synchronized to the grid. That stunning milestone was two days ahead of schedule.

All generating units at the Attaqa plant—7 miles from Suez City, which sits on the shores of the Gulf of Suez to the east of Cairo—were connected to the grid by July 7, 2015, when it was inaugurated by former Prime Minister Ibrahim Mahlab. The plant’s owner, EEHC affiliated company the East Delta Electricity Production Co., is now looking to convert the plant—at an additional cost of $360 million—to combined cycle mode and increase its overall capacity from 640 MW to 960 MW.

Unsurprisingly, the biggest challenge faced by the project’s many participants was its constricted six-month construction timeframe (Figure 1).

Challenges related to finding the necessary equipment, which was sourced from around the world, were sidestepped mostly owing to Siemens’ strong supply chain. Getting that equipment through customs and then transporting it to the project site on time was aided by government intervention, including armed forces, according to plant officials speaking at the inauguration ceremony.

Even with the clock ticking, the project team comprising 1,500 workers and engineers—all Egyptian—experienced no injuries.

The Attaqa plant’s timely completion has most prominently been a triumph for Elsewedy’s engineering and construction arm PSP, which supplies, installs, and commissions overhead transmission lines and substations as well as EPC solutions to power generation projects in the Middle East and Africa—though not previously in Egypt. Steps to alleviate Egypt’s energy crisis that have opened up new projects to private companies have been a boon for the company. Siemens, too, has cemented its foothold in the country with Attaqa. Elsewedy is now poised to participate in another major project led by Siemens to add 14.8 GW to Egypt’s grid, including for the 4.8-GW Beni Suef project, which is set to be one of the world’s biggest gas-fired combined cycle power plant complexes when completed, likely in early 2017.

For completing the Attaqa plant within a tight schedule to provide an efficient and reliable power supply, despite numerous challenges, and for serving as the model for large-scale fast-tracked power plants in an energy-strapped country, this plant is highly deserving of a POWER Top Plant award. ■