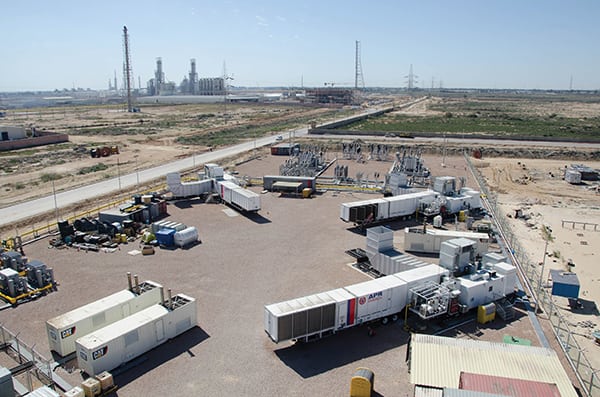 Within roughly 90 days, APR Energy set up a 60-MW turnkey power plant—complete with novel natural gas filtration and compression solutions—to support the operations of a massive Egyptian polyethylene plant until a bigger, permanent power plant can be built.

It all began in April 2013, when Egyptian Ethylene and Derivatives Co. (ETHYDCO) awarded a lump-sum turnkey contract to Japanese engineering, procurement and construction firm Toyo Engineering and Egyptian state-owned Engineering for the Petroleum and Process Industries (ENPPI) to build a $400 million polyethylene plant in Alexandria, a bustling port city in northern Egypt.

Scheduled to come online in the second quarter of 2016, the greenfield unit—the largest polyethylene plant in the nation—was planned as part of an even more gigantic $2 billion petrochemical complex under construction in the Ameriya District, on the Mediterranean Sea. The polyethylene plant is designed to produce 400,000 metric tons per year of the common plastic for many applications, including for packaging and bottles. And, because it will help the country reduce its imports of petrochemical products and support the booming development of its local industries, it has the Egyptian government’s staunch backing.

But although the project is connected to the local utility company, Egyptian Petroleum Co., power supplies are not reliable owing to numerous outages and operational problems. Original plans called for the plant to use 30 MW produced by a nearby refinery, but that plan was scrapped during the fourth quarter of 2014 due to high cost and doubts about its viability.

This meant that ETHYDCO—the country’s largest public company—was bereft of a reliable power source for its nearly completed chemical plant, putting it at risk of more costly, debilitating delays.

Scrambling to rectify the situation, ETHYDCO mulled its options, eventually contracting ENPPI for the construction of a 70-MW permanent simple cycle gas turbine power plant (that will later be converted to combined cycle mode), as well as a transformer substation that will connect it to the national 220-kV grid within the next two years. But realizing that plant wouldn’t be completed before the polyethylene unit started operations, ETHYDCO also sought an interim, fast-track power solution for the commissioning of its polyethylene and other units at the petrochemical complex.

The contract was eventually awarded in July 2015 to Mantrac Egypt, which subcontracted APR Energy, a Jacksonville, Fla.–headquartered company specializing in large-scale expedited power solutions, for fast-track installation and operation of the three-turbine plant.

APR Energy got its start 12 years ago, when co-founders John Campion and Laurence Anderson bought the Alstom Power Rentals division from French giant Alstom Power (which has since been acquired by General Electric [GE]). By 2008, the company had been rebranded as APR Energy; by 2010, it doubled its fleet capacity size; and in 2013, the company also took on GE’s power rental business in a $314 million deal.

Contracts have since been stacking up for diesel- or gas-powered modules and fuel-flexible turbine solutions spanning 15 MW to 450 MW for energy-intensive industries reeling from power shortages and in dire need of rapidly deployable solutions in countries including Australia, Argentina, Botswana, Guatemala, Senegal, Libya, Uruguay, Myanmar, and many more. Today, APR Energy has installed more than 3 GW of capacity across more than 30 countries.

At the time, the contract signed with ETHYDCO for three natural gas–burning GE TM2500 aeroderivative mobile dual-fuel turbines had an estimated value exceeding $30 million. For Anderson, who serves as chief operating officer for the company (co-founder Campion serves as chairman and CEO), it was the “result of many months of work and gives us a foothold in one of the largest markets in the region.” As is standard with its full-service package, APR Energy’s contract also included design, installation, and commissioning work for the plant, as well as operation and maintenance. 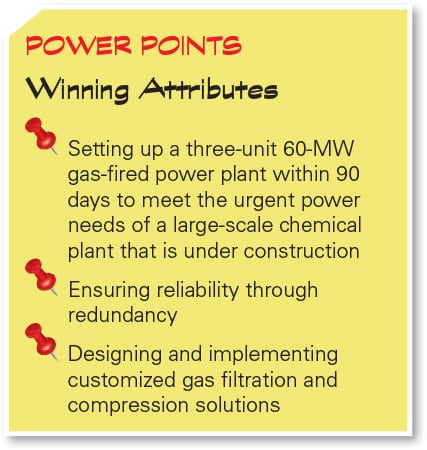 While the chemical facility requires just about 30 MW of generating capacity from the turbines—which have an individual ISO rating of 20 MW to 25 MW (depending on local conditions)—ETHYDCO requested that APR Energy operate three turbines at the same time to provide redundant capacity, aiming specifically to ensure uninterrupted power. “Reliability was so important that the customer contracted three turbines capable of generating 72 MW to deliver a guaranteed 30 MW of electricity. We had redundancy throughout the plant,” noted Jason Doll, an APR Energy electric design engineer.

“A power outage at a petrochemical facility can shut a plant down for days, since all processes need to be restarted. That meant that this project had a lot more pressure than most,” explained Eduardo Perez, another APR Energy electrical engineer. Currently, APR Energy runs all three turbines at 10 MW, so if one fails, operators can instantly increase the other two to 15 MW and avoid any power outages, he said.

But ensuring that reliable power generation also meant that APR Energy’s engineers had to come up with customized solutions to enable the turbines to run on the local supply of natural gas and to accommodate pipeline gas compression of just 70 psi to 80 psi (Figure 1). By comparison, large industrial facilities and utilities in the U.S. generally receive gas at pressures between 30 psi and 650 psi. Also potentially disruptive was that the pressure of the natural gas was highly fluctuating. This posed a challenge for the machines that could potentially be destroyed by pressures that are too low or too high, the company said.

“The majority of companies like ours won’t go to places with low gas pressure,” said Rami Abusoufeh, an APR Energy mechanical engineer. “They want 300 psi or more. We were able to design customized filtration systems and compressors in-house that gave us the flexibility to operate with different gas pressures, different ambient temperatures, and uncertain gas quality.”

Meanwhile, APR Energy noted that the region in which the chemical plant complex is being built has also been historically avoided by energy facility developers, owing to its “extremely soft sand [that is] almost like dust and can thus also harm the units used.” The company said it sidestepped that potential problem from the start because its units are already designed to survive rough and harsh conditions.

Otherwise, the most prominent challenge the project faced was meeting the promised 90-day timeframe. During that period—with a construction crew of up to 85 local workers who spent every day, including Christmas and New Year’s Day, onsite—APR Energy tackled a number of potential delays posed by “numerous customer change requests.”

Then, it faced lengthy delays of critical equipment at customs. “There were many delays and changes during construction, but we were able to react—even if it meant going to the local market to purchase piping, nuts and bolts, oil, and tools. The customer didn’t understand how we completed the project so fast,” Abusoufeh noted.

Despite hurdle after hurdle, just weeks after construction began in November 2015, the project went online in January 2016.

A Breakthrough with Long-Term Implications

In hindsight, however, the project has been a breakthrough on many fronts for APR Energy. “This was a project full of ‘firsts’ for us,” said Tom Michaud, a project manager. “It was our first turbine installation using natural gas, so this was a new technology for us. It was also the first private chemical industry customer we’ve had.”

For APR Energy, successful completion of the project—which is feeding the entire Ameriya petrochemical complex and is scheduled to run for at least 12 months—is a source of pride. “A large part of the population of the city of Alexandria works at ETHYDCO, so at the same time that we provide the power for the polyethylene plant to make sure it remains operational, we are also ensuring the security of local jobs, allowing the company to grow,” Abusoufeh said. ■