The first six of a dozen high-capacity turbines were commissioned in mid-December at the 60-MW Alpha Ventus project in the North Sea, Germany’s first offshore wind park. All 12 turbines of the €250 million project are already standing, put up in just seven months by a consortium of EWE, E.ON, and Vattenfall — formally known as Deutsche Offshore Testfeld und Infrastruktur (DOTI).

The construction of the 12 massive 5-MW wind turbines 45 kilometers (km) from the shore in waters 30 meters deep was a "remarkable logistical achievement," the DOTI companies said in a joint statement. It was far more complex than other wind parks because it involved building two types of German-manufactured wind turbines on two different types of foundations: six AREVA Multibrid 5-MW M5000 turbines, which came online in December, and six 5-MW Repower turbines. The turbines stand in a 4-km2 rectangle. The Multibrid turbines from AREVA rise 148 meters above the sea surface (Figure 3) while Repower’s turbine’s rise 155 meters high. 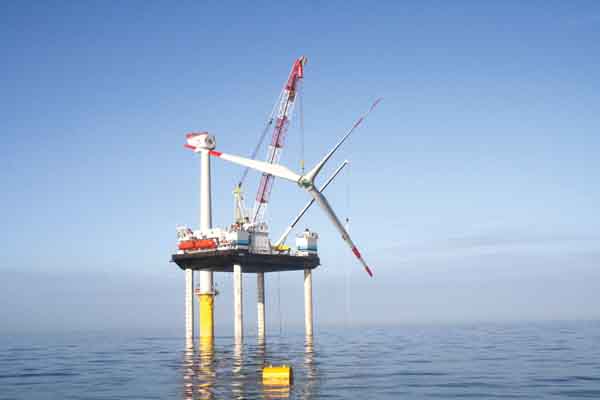 After initial difficulties with the construction vessels in 2008, the team promptly put "lessons learned" into effect in 2009. At the peak of construction in summer 2009, around 350 people and up to 25 different ships were simultaneously at work on site. Among these vessels were three brand-new jack-up barges that had arrived at Alpha Ventus almost directly from the shipyard for their first offshore work — as well as the largest crane ship in the world, Thialf, which installed the jacket foundations for six of the Repower wind turbines in only six days.

The project is also significant because it marks AREVA’s first foray into the offshore wind sector after the company acquired 51% of German company Multibrid in 2007. In January, Jean-Paul Crouzoulon, a senior vice president of renewables at AREVA told POWER that the achievement demonstrates the technical feasibility of the turbine design — and that it served as a reinforcement for AREVA’s ambitious goal to capture 25% of the global offshore wind turbine market.

The French company is looking to diversify its services portfolio after having announced it would sell its lucrative transmission and distribution (T&D) division to Alstom and Schneider Electric for a reported sum of €4.09 billion. Last summer, the nuclear giant put up its T&D business to plug a €12 billion gap and finance investments such as the buyout of Siemens and AREVA NP following the dissolution of that nuclear joint venture, as well as cost overruns on the Finnish EPR Olkiluoto 3 project. The T&D sector generated €5.06 billion in 2008, or 38% of AREVA’s total revenue, and the division grew 17% in 2008 as compared to 2007.

Nuclear will continue to be essential for AREVA, but since Jan. 1, 2010, the company decided that it would develop a range of carbon-free "synergistic solutions" — specifically offshore wind, biomass, and energy storage — via its renewables division. Crouzoulon said that already AREVA’s revenues from renewables had grown to €1 billion. "We’re focusing on big projects, solutions," said Crouzoulon, pointing out that Europe had set a target to obtain 20% of its power from renewables by 2020 and that AREVA now had the technologies to support the growth.

Crouzoulon also said that the company has set its sights on the U.S. renewables market, particularly on the undeveloped but high-potential offshore wind sector. Biomass would also be a major offering, he said. AREVA’s 2008 acquisition of Brazilian power plant designer Koblitz had strengthened its position in the sector, and the company already had a joint venture with Duke Energy to develop biomass power in the U.S. But AREVA has no interest in onshore wind, Crouzoulon said. This became evident when AREVA sold its 29% onshore wind stake in Repower to Indian company Suzlon in June 2008 because it was unable to acquire a controlling interest in the German firm.