A variety of factors could impact fossil fuel unit retirements. Although the Environmental Protection Agency’s (EPA’s) Cross-State Air Pollution Rule (CSAPR) was vacated by a federal appeals court in August, many coal-fired units have already installed costly emission controls due to the EPA’s looming Mercury and Air Toxic Standards (MATS), which will come into effect in 2015.

An unintended consequence of CSAPR being vacated is older units potentially coming under the effect of the regional haze rule. The rule stipulates that units placed in service between 1962 and 1977 that can affect visibility in national parks must install best available retrofit technology (BART). Due to costly emissions controls and the anemic rate of proposed coal-fired power projects, existing coal-fired units with installed retrofit technology could potentially operate well beyond historic retirement ages as utilities try to recoup the significant capital costs associated with retrofit technology (Table 1).

Other oil units, which largely include combustion turbine and internal-combustion peaking technologies, have just met the average retirement age since 1999 of 32 years. With more than 3,700 units nationwide, other oil units account for almost 26,000 MW of capacity.

Steam turbine units that primarily burn petroleum also are approaching retirement age quickly, with an average age of 41 compared to an average retirement age since 1999 of 48 years. Many of those units may be at risk for retirement over the next three years due to MATS and the Regional Haze Rule, both of which could impact oil-fired units.

Generation from oil-fired units also has seen a dramatic decrease due to the availability and low price of natural gas. Some independent system operators have seen a drastic shift in reliance, moving to gas-fired generation from oil generation for both peaker and intermediate units (Table 2). 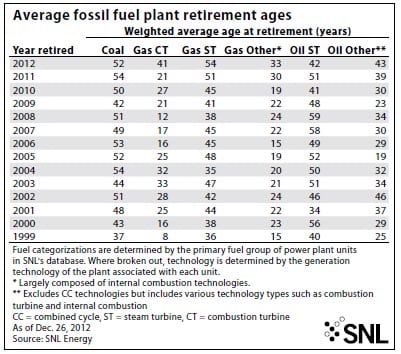 Nuclear units across the United States are nearing the end of 40-year operating licenses, with an average unit age of 32 years. Licensees are able to apply for a renewal of up to 20 years, subject to the U.S. Nuclear Regulatory Commission’s (NRC’s) approval. Although the NRC has readily extended licenses for units, a bill introduced in the House of Representatives in September 2012 looks to curb how nuclear owners apply for renewals. The Nuclear Reactor Safety First Act would limit the advance time period in which a licensee could apply for a renewal to within 10 years of the license expiration date.

Several generation technologies largely developed over the past 10 to 15 years are not at significant risk of potential retirement over the decade. Those include natural gas combined-cycle (CCGT), wind, and solar technologies. The average age for CCGT units in the U.S. is 12 years, with very little variation among regions. Solar units have an average age of five years, though that number is skewed by the relatively large number of older solar facilities within CAISO. That region was one of the first investors in renewable energy, made evident by the average age of eight years for its solar units and nine years for wind units. The weighted average for wind units across the nation is five years, with very little variation across ISOs.

CH Energy Group Inc. has the oldest fleet among the nation’s publicly traded utility holding companies, with a weighted average age of 53 years. The company owns two gas plants, the 20-MW South Cairo plant, brought online in 1970, and the 23-MW West Coxsackie plant, which came online in 1969. Both plants are in New York. The company also has an aging hydro fleet, with two plants brought online in the 1920s and one in 1986.

Northeast Utilities has the second-oldest fleet, with a weighted average of 46 years. The company has the oldest coal fleet of 48 years across two coal plants. The 452-MW Merrimack plant was brought online in 1960 and equipped with scrubbers in March 2012. The second coal plant, Schiller, has been operating since 1952, and there have been no announced plans to retrofit or retire the 142-MW plant. Schiller, which had one of its coal boilers replaced by a wood chip–fired boiler in 2006, received no coal deliveries in 2012, as of Oct. 31, 2012, according to SNL Energy data (Table 3). 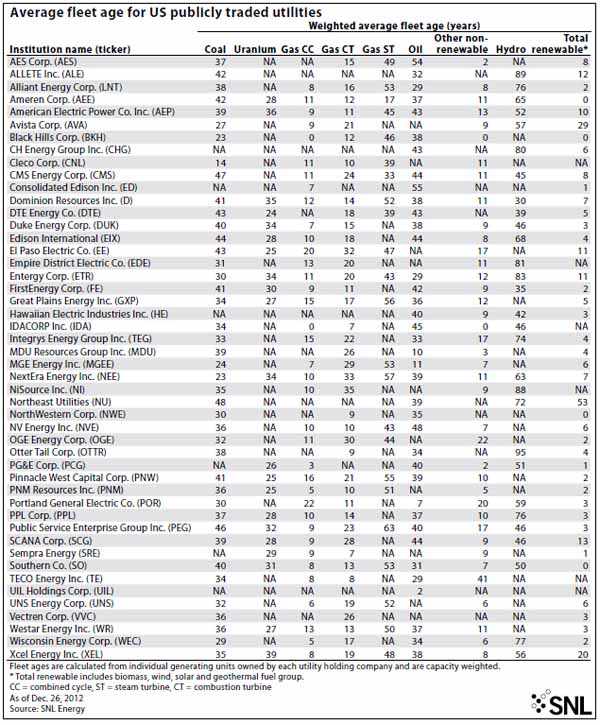 —Neil Powell is an analyst with SNL Energy. This article is reprinted with permission, with minor edits for this publication.