The back-to-back collapse at the end of July of India’s Northern, Eastern, and Northeastern grids that slashed power to more than 60% of India’s population of 1.24 billion has impelled the country into a spending frenzy to upgrade its rickety power network, which, a government inquiry revealed, was one cause of the unprecedented blackouts. But the 10th-largest economy in the world has much more work to do, including a much-needed overhaul of its current patchwork of energy policies, experts say.

The blackouts on July 30 and July 31 afflicted a massive swath of the subcontinent stretching 2,000 miles from Assam on the east, near China, to the Himalayas in the north, and the northwestern deserts of Rajasthan. The Western and Southern grids were unaffected, leaving Gujarat and many southern states untouched by the chaos. In the days after the blackouts, as the country registered how immense the problem was, the government jumped into action. 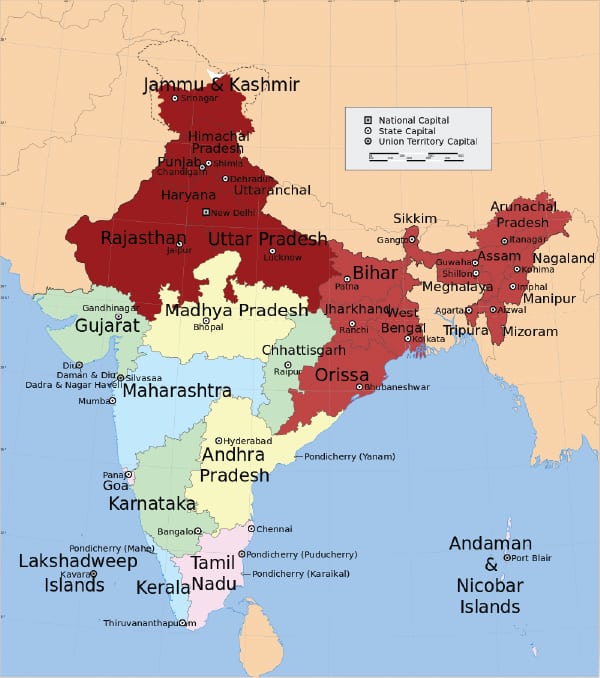 2. Blackout. When the Northern, Eastern, and Northeastern grids collapsed on July 30 and 31, more than 60% of India’s population of 1.24 billion across 22 states experienced power outages lasting as long as eight hours. States shaded in dark red are those that were affected on July 30; lighter red indicates additional states affected on July 31. Source: Wikipedia

As speculation mounted about the cause of the blackouts, the government’s first order was to assemble a three-member panel to determine the reason for the massive failures. In an 81-page report issued on Aug. 16, the panel pinned the causes on weak interregional power transmission corridors that had been compromised by multiple existing outages. Northern India was already seeing excessive power demand, and a chronic supply shortfall was exacerbated by lower-than-normal rainfall from the weak summer monsoon that strained the country’s hydroelectric power supply. But on July 30, several utilities overdrew from the Northern Grid despite instructions from regional load dispatch centers, causing its collapse and putting out the lights for the more than 300 million people it serves across nine states.

On July 31, after the Northern region was separated from the Western region following the trip of the 400-kV Bina-Gwalior line, the Eastern and Northeastern grids collapsed, barring a few pockets, due to “multiple tripping attributed to the internal power swings, under frequency and overvoltage at different places,” the report said. Restoration took five hours, eight hours, and two hours in the Northern, Eastern, and Northeastern regions, respectively.

Several measures could have saved the system from collapse, the report pointedly concluded, including “better coordinated planning of outages of state and regional networks, specifically under depleted condition of the inter-regional power transfer corridors,” and “better regulation to limit overdrawal/underdrawal.”

The panel’s message was clear. In September, Power Grid Corp. of India, the nation’s largest electricity transmission company, pledged to spend 1 trillion rupees ($18 billion) to upgrade its network over the next five years. The urgency is not understated, company officials say, noting that India plans to increase its generating capacity by 76 GW by 2017. “Making sure a collapse doesn’t happen again is our top priority,” Power Grid Chairman R.N. Nayak said in an interview with Bloomberg on Sept. 14. “We may end up crossing that 1 trillion-rupee spending mark to strengthen and stabilize the gaps exposed by the blackouts.”

Yet that is only the tip of the iceberg, say experts from the International Energy Agency in a September report outlining challenges that the country must address to create a well-functioning, financially viable power sector. Hurdling the first of those challenges will require further reform of the electricity sector, whereby the nation’s energy companies can achieve “managerial autonomy from central or state ministries… for timely investment.” The key issue is “not private- versus publicly-owned entities; rather, ownership should not interfere with market principles,” the report says.

Another pressing reform involves pricing mechanisms. The current rigid pricing setting determined by the government does not reflect realistic costs, and this has been a primary cause of India’s recurring fiscal and supply-side problems, the report says. India’s power sector is overwhelmingly afflicted by a shortage of fuels, insufficient infrastructure, and financial weakness of state-owned power companies—and these are issues caused by “distorted pricing mechanisms and a systematic weakness to enforce legitimate revenue realization.”

One way that India could possibly become an open and functioning energy market is by electing strong political leadership to convey clear policy messages. “Frequent populist remarks, which, for example, promise free electricity, are not conducive to creating the right public perception of energy as a commodity, not an entitlement. Furthermore, in the context of an increasing need for investments and the integration of India’s energy sector into the global energy market, India needs to align its energy policies and institutions with global practices,” it concluded.