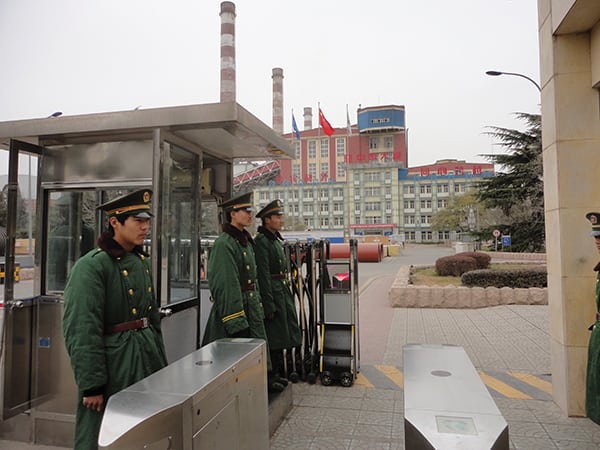 As it struggles to grow its economy while improving air quality in urban areas, China is updating its energy delivery infrastructure. A key part of that plan is switching from coal-fired to gas-fired combined heat and power plants. To push efficiency even further, some plants are turning to synchronous clutches.

The developed world has done a lot to reduce its fossil fuel usage for both economic and environmental reasons. As the rest of the globe races to move up to first-world status, the question is how to achieve economic development without the pollution that accompanied Europe’s and North America’s industrialization. An unprecedented opportunity lies in taking the technologies and best practices learned over the past two centuries and applying them to growing markets so that citizens of emerging economies can enjoy the benefits of greater wealth without simultaneously endangering their health.

One way to achieve this is by combining combined cycle gas turbine (CCGT) generation plants with district heating (DH) systems, achieving a higher level of efficiency, lower fuel costs, and fewer emissions than simple cycle or CCGT. This approach is catching on around the world, but China is especially keen to use it.

China is not about to cut its economic growth. While it has the world’s second-largest economy, just behind the U.S., its GDP per capita is one-fifth that of the U.S. To keep growing, without excessive spending for fuel and unnecessarily increasing its emissions, the country needs to get more value out of the energy it is using.

District Heating Is Essential in China

In the 1950s, China’s Communist Party started to provide free heating to residents in Northern China (defined by the boundary created by the Huai River and Qinling Mountains), and this was achieved with inefficient coal-fired boilers and combined heat and power (CHP) systems sited on the outskirts of cities. Many of these old coal plants continue in use today but have been consumed by urban sprawl.

Although most heating is paid for these days, the charge is based on building size rather than energy usage, so even basic thermostatic control is limited. The combination of inefficient production and inefficient use means that the DH facilities are a significant factor in the pollution increase that blights northern Chinese cities. This has motivated the government to implement high-efficiency DH systems.

While Denmark, Iceland, and Latvia provide more than 60% of their citizens with district heating, according to the EU’s Euroheat & Power organization, China only trailed Russia in terms of total DH sales in 2011 that were 2,810,000 terajoules, a 25% increase over 2007. That steam and hot water was delivered through 147,338 kilometers of trenches to 4.7 billion square meters of floor space. The total heat delivered in 2011 was double what it was a decade earlier, and the pipeline length and heated area tripled during that time frame.

As it continues to expand its DH capacity, provide more electricity, and at the same time address its air quality disaster, China cannot follow the approach it took decades earlier using coal-fired boilers and steam generating plants. Instead, it must utilize cleaner technologies that can safely operate within city limits. One of these is CCGT generating units along with district heating. Despite the low cost of coal versus relatively high prices of natural gas in China, the government appears to value the efficiency and environmental benefits of CHP and combined cycle facilities.

A CCGT plant already has the capacity to convert the GT’s waste heat into steam for power generation, and a modern plant can exceed 60% efficiency in this mode. A CCGT/DH plant goes one step further, using the steam to also provide district heating. Use of the low-grade steam in this way can increase efficiency to well over 90%. (Currently, these systems only provide heating, though in the future, they may enable district cooling in the summer.) According to Siemens, using a CCGT allows far more of the fuel to be converted to electricity than either a steam turbine or a simple cycle gas turbine (Figure 1).

But there is one additional factor to consider. Because temperatures fluctuate daily and seasonally, as does demand for electricity, and because you can economically store heat but not electricity, it is ideal to have a system that can vary its output between maximum heat and maximum electricity, as needed. To do this requires installing a synchronous clutch to fully disconnect part of the turbine, making it easy to switch between greater heat or greater electrical production, all while minimizing unnecessary losses.

For high-horsepower, critical service applications, an automatic overrunning clutch that transmits torque through multiple gear teeth and separates the synchronizing function from the torque-carrying components, such as a Synchro-Self-Shifting (SSS) Overrunning Clutch, is normally utilized (Figure 2).

With such clutches, small pawls are used to mate with ratchet teeth to align and then shift the clutch teeth into engagement along helical splines. The teeth are engaged automatically at synchronism at any speed from rest to full operating speed. The pawls and ratchets are inactive except during the short engagement process. Once engaged, torque is transmitted through the surface contact of concentric involute-shaped teeth. An internal oil dashpot, between the input and output components, cushions the engagement of the clutch.

The clutches for this type of operation are typically installed between the high-pressure (HP) and low-pressure (LP) sections of the steam turbine. When more heat is needed, the clutch disengages the two sections, and the steam exiting the HP section is redirected to a heat exchanger to heat water for DH use. When demand for heat is low, the clutch reconnects the LP section, which resumes its generation role. This arrangement works with both single-shaft and multi-shaft CCGTs.

CCGTs and District Heating in China

Several such projects using clutches have been installed in China in recent years. For example, Mitsubishi Heavy Industries (MHI) has created a joint venture with Dongfang Steam Turbine Works called Mitsubishi Heavy Industries Dongfang Gas Turbine (Guangzhou) Co., Ltd. to manufacture key gas turbine components inside China. The plant opened in 2005, and Dongfang and MHI have collaborated on several CCGT/DH projects since then.

State-run China Huaneng Group, one of China’s five largest power producers, operates a power plant in Gaobeidian, an eastern suburban township of Beijing. There Dongfang provided a 2 + 1 CCGT set consisting of two M701F turbines and one steam turbine. An SSS 340T clutch with lock is installed between the HP and LP steam turbines. (Three SSS clutches are also used for the turning gears, one for each shaft line.) When there is a demand for district heating, the clutch disengages the LP turbine from the HP turbine. A valve directs the steam exiting the HP turbine to a heat exchanger for the DH system. The steam, now condensed, is sent back to the heat recovery steam generators (HRSGs). When only power generation is needed, the clutch reengages, the valve directs the steam exiting the HP turbine to the LP turbine and then to a condenser before sending it back to the HRSGs. The arrangement produces 920 MWe during the summertime or 830 MWe plus 660 MWt during the wintertime.

Dongfang provided a similar arrangement for the Chentangzhuang plant near Tianjin, a port municipality of 13 million people located at the mouth of the Yellow River. In this case, however, two CCGT sets were installed—four M701Fs and two sets of HP and LP turbines linked by 340T clutches—so the plant can switch between operating modes depending on the power and heat demands.

MHI is not the only company building district heating plants in China. While MHI teamed up with Dongfang, Siemens set up a joint venture with Shanghai Electric Corp.—Shanghai Electric Power Generation Equipment Co. Though Shanghai licenses Siemens’s GT and steam turbine technologies for single-shaft CCGT, for CHP it uses its own design for the steam turbines. Its first such CHP plant, JingQiao (Beijing Bridge) uses the 340T clutch, and Shanghai has ordered additional 340T, 300T, and 270FTs for other plants.

Dresser-Rand is also building CCGT CHP plants in China, and Harbin Electric, whose first such plant with 340T and 300T clutches (Figure 3) at Gaojing in Western Beijing (shown in the opening photo) is now operational, has signed a contract with GE to use its FlexEfficiency technology for CHP.

Spreading to Other Countries

While China is the biggest market currently for such CCGT plants, it is not the only one. Given its high efficiency, low emissions, and operational flexibility, this model is catching on around the world. Across the border in South Korea, where they adopted the technology in the early 1990s and have 13 sets in the Seoul area alone, Doosan is building the world’s first underground power station in central Seoul and is using it as a district heating source. The $931 million facility will also supply up to 9.8% of Seoul’s power demand as well as heating nearly 100,000 homes.

Over in Austria, power provider Verbund AG gets more than 80% of its electricity from hydropower, but in 2011 it opened an 838-MW power station in Mellach to provide power and district heating. Unlike the power plants in China and Korea, this one uses a single-shaft design. There are two power trains, each with a Siemens SCT5-4000F GT, an SST5-5000 ST with a 340T clutch, and an SGen5 generator. The plant operates at 59.2% efficiency when only providing electricity. When also providing steam (400 MWt) the efficiency rises above 80%. The new plant replaces five older units burning lignite or fuel oil and so reduces annual CO2 emissions by two million tons.

In England, E.ON recently commissioned the last of three Alstom KA26 single-shaft CCGTs at the 1,275-MW Isle of Grain power station at the mouth of the Thames River. In this case, instead of the waste heat being used to heat homes, it is sent to a nearby liquefied natural gas (LNG) terminal, where it is used to heat up the –162C LNG so it returns to its gaseous form. If not for this arrangement, the heat would have been expelled into the sea and the LNG terminal would have burned some of the natural gas to warm up the rest.

There are many other opportunities for generators to increase efficiency and reduce emissions by implementing a CCGT/clutch/CHP arrangement. Discussions are ongoing to replace some superannuated plants in Eastern Europe and Russia. There are also opportunities in the U.S., though in most parts of that country there is a greater opportunity to use waste heat to drive chillers than for heating buildings. ■

—Joe Zwers is a freelance writer specializing in energy, business and technology topics.