Everything you want to, or should, know about uranium mining and processing is in a new book by Tom Zoellner, not including the terrifying threat of crocodiles in northern Australia.

One of the weirdest hotels in the world is in Jabiru in Australia’s Northern Territory, located in the Kakadu National Park some 140 miles from the city of Darwin. The Holiday Inn is shaped like a crocodile, the defining critter in that upper end of Australia. 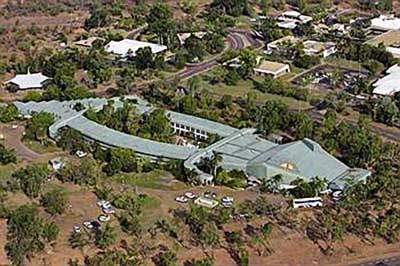 One of the jokes Aussies pose to tourists is this: What are the three most dangerous animals in Australia? Answer: No. 3, the crocodile; No. 2, the crocodile; and No. 1, the crocodile. Indeed, the saltwater croc (Crocodylus porosus, which the Aussies call a “saltie”) renders many of the most beautiful beaches in the world unfit for anything other than walking and shallow wading. Don’t swim. The crocs can get you. These are the largest of all crocodilians and reptiles in the world. They are also nasty and aggressive. They eat people. No joke.

The Gagudju Crocodile Holiday Inn at Jabiru is funky, fun, and comfortable, with a very nice pool, good food (including croc, which tastes like tough chicken, and kangaroo, which tastes like low-rent beef), flights of large fruit bats in the evening, and, best of all, a good bar (Aussies love their drink, and I love Aussies). Jabiru is a tourist town, in the midst what of the Aussies claim, and who can challenge it, is the largest national park in the world, Kakadu. To my mind, it is one of the most interesting parks I’ve ever been to, including an astonishing geologic feature, the Arnhem Escarpment, which is the border of the Northwest Territory and Arnhem Land, territory mostly reserved for aboriginal people. Kakadu is a marvel.

Jabiru: So Much More than Just Crocodiles

But tourism isn’t why Jabiru exists. Its roots are in uranium. Jabiru was founded and built to serve the Ranger mine, one of the most important uranium mines in the world. Kakadu and the mine were created in 1977 in an uncomfortable political compromise that allowed the designation of the national park, while at the same time allowing the development of the uranium mine. I visited both in mid-2008. 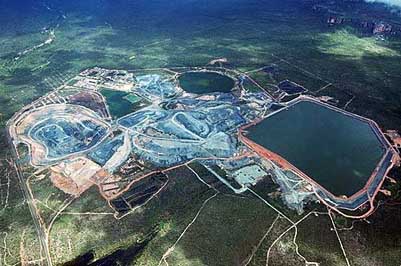 The Ranger mine is one of the most important uranium mines in the world. Courtesy: Ranger Mine

A fine new book, Uranium: War, Energy, and the Rock that Shaped World, describes the creation of the Ranger mine, Kakadu National Park, and the building of Jabiru as a company town supporting the mine, as well as much more about the global trade in uranium. The book is a well-written, gripping history of the mineral that powers electric generating plants around the world and arms bombs that could destroy cities and countries (and did destroy the Japanese cities of Hiroshima and Nagasaki).

Author Tom Zoellner has done a fine job of explaining how scientists discovered radioactivity, figured out how to use it (for good and evil), and how people came to exploit the natural resource—uranium ore—to make that happen. He also explains how it was used to kill hundreds of thousands of people and produced a nuclear stalemate between the U.S. and the Soviet Union that arguably resulted in the fall of Communism in Europe.

Today, of course, uranium is part of one of the most important foreign policy questions that faces the world. Iran is embarked on what it claims (and some doubt) is a civilian-only nuclear power program. North Korea openly touts its military development of nuclear power and has exploded at least a couple of small test bombs underground.

As someone who grew up with the uranium boom of the 1950s—my father, a coal mining engineer by heritage and education, prospected some of the most promising uranium finds in the Southwest—I found Zoellner’s book gripping. For anyone who has had business dealings with uranium—from exploration and mining, to refining and concentrating, to enriching, to using nuclear fuel—this book offers fascinating background. Even if you are just interested in 19th- and 20th century history, the book is a good read—entirely worthwhile.

Zoellner demonstrates that the story of uranium isn’t just about how to find the stuff and make it into fuel or bombs. It’s about science, politics, culture, history, and a checkered future that includes the possibility of unimaginable warfare or a path to a carbon-reduced economy.

Many Facts Still a Mystery

Ultimately, Zoellner is conflicted and a bit confused by his subject. That’s completely understandable. “There is much that remains enigmatic about uranium 70 years after Hiroshima,” he writes. “Even a basic question—‘how much of it does the U.S. government have under lock-and-key?’—does not have a firm answer. The U.S. Department of Energy decided in 1996 to make a complete inventory of all the highly enriched uranium America had manufactured through the years of the cold war. Such a task may have seemed easy at first glance.”

It proved to be nearly impossible, Zoellner reports. The traditional cult of secrecy that surrounded weapons production at the Atomic Energy Commission and the successor DOE meant that no one could know, or figure out, exactly how much weapons-grade uranium the government had made over the years. The government suppressed the final report for “nearly a decade,” Zoellner noted. The White House finally released the document after a long campaign by the Federation of American Scientists, an anti-nuclear-weapons group that grew out of the angst of many atomic scientists following World War II and the nuclear attacks on Japan.

The report, finally declassified after years of wrangling over the FAS’s Freedom of Information request, wrote Zoellner, “revealed that we had produced slightly more than 1,000 tons of highly enriched uranium in the course of half a century, and that approximately 3.2 tons of it had vanished at some point.” Lost in pipes? Rounded off in accounting? Diverted? Nobody knows. The question is probably not answerable.

Uranium is mysterious and fascinating stuff, and Tom Zoellner’s book is worth reading just to try to unravel the mystery. You’ll learn a lot about uranium—where it is in the ground, when it has been turned into something useful, and how it gets to you when you turn on the lights. The book, Uranium: War, Energy, and the Rock that Shaped the World (New York: Viking, 2009), is recommended reading for energy wonks and for folks interested in modern history.