No matter what its size, fine particulate matter is a serious matter for coal-burning power plants. A process that charges those particles shows promise for mitigating the problem.

Emerging regulations have focused on PM2.5 of late because recent epidemiological testing has linked many health issues to particulates of this size. These tests have focused specifically on primary PM, especially particulates formed in the combustion process that can produce these particulates. Fine PM has been identified by the World Health Organization as the main pollutant that has a direct impact on human health.

Currently, there are no specific U.S. federal regulations limiting the emissions of PM2.5 to the atmosphere from industrial and combustion processes. However, the U.S. Environmental Protection Agency (EPA) has reduced its ambient 24-hour level from 65 micrograms per cubic meter to 35 micrograms per cubic meter and expects the number of nonattainment areas that exceed this limit to increase from just over 50 to perhaps more than 100 once the proper analysis has been made. This new regulation will force air regulators, and eventually the EPA, to take action on PM2.5 emissions based primarily on the increased health impact of the fine particulates.

First, the mass of a particle is a function of its volume, or the cube of its diameter, whereas visibility, or obscuration, is a function of the particle’s cross-sectional area, the square of its diameter. This means that when particles lose mass, their obscuration, or contribution to opacity, reduces at a proportionately slower rate. For example, one gram of 0.1-micron-diameter particles will have 100 times the amount of cross-sectional area, and hence obscuration, as 1 gram of 10-micron particles, and therefore their contribution to opacity  will be more than 100 times higher.

The second issue is refraction. The wavelength of white light is about 800 nanometers, so fine particles that are about 0.8 microns in diameter will cause light to bend, or refract. This causes the particle to appear larger than it is and, as a result, its obscuration and, hence its contribution to opacity, increases by up to a factor of five. Particles in the range of 0.2 microns to 2 microns in diameter have a very strong effect on visibility and opacity because of this refraction component. Smog is mainly caused by particles in this size range.

1. Visible emissions from an electrostatic precipitator are a function of the particles’ diameter. Submicron particles contribute more to visibility than larger particles due to refraction.  Source: Indigo Technologies LLC

The health impacts of fine PM, identified as very high by both the EPA and the World Health Organization, include both heart diseases and lung diseases, such as lung cancer. Of particular concern is primary PM, which can contain toxic metals. Secondary PM, primarily nitrates and sulfates formed in the atmosphere, seem to have much less impact on health issues.

There are two reasons why PM2.5 can have a large impact on human health:

•    The small size of the particles makes it easy for them to enter the lungs. PM0.1 particles can pass through the lungs into the blood and contaminate the blood stream. The ingress of these particles deep into the lungs and blood can cause major pulmonary and cardiac problems, such as chronic bronchitis and heart attacks.
•    Tests on PM2.5 have found much higher levels of toxic materials present compared to the concentration in larger particles. The combustion processes causes heavy metals to vaporize. This is followed cooling and condensation of the heavy metal vapor into individual fine particles, or nucleation on the surface of existing fine particles, hence the very high heavy metal concentration in PM2.5. Of particular concern are metals such as arsenic and selenium, which may have low concentrations in coal but quite high concentrations in PM2.5

The increased concentration of arsenic in fine particles that are formed in a combustion process has been confirmed in tests performed by Indigo Technologies. For example, ash samples from a typical coal-fired power plant were taken from each of its ESP hoppers, located below each of the six collection sections and were analyzed for particle size and arsenic concentration. Figure 2 shows the particulate size distribution collected in each section of the ESP. The easy-to-collect larger particles were collected in the first section of the ESP and the more difficult-to-collect fine particles in the rear section. Table 1 shows the concentration of arsenic in the ash at various locations where the ash samples were taken. 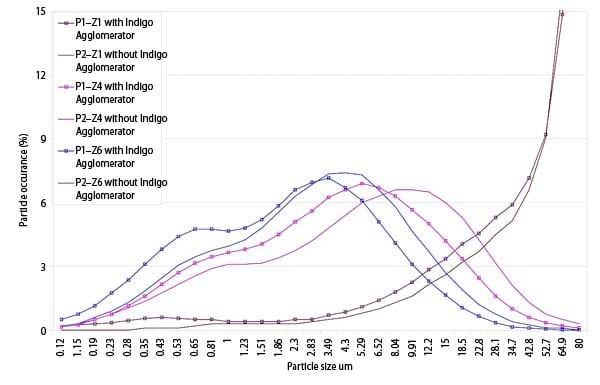 2. Electrostatic precipitator hopper particle size distribution on a mass basis. P1 means pass one through the precipitator. Z1 represents hopper number one. The arsenic concentrations at each location are shown in Table 1. Source: Indigo Technologies LLC

The data show that the concentration of arsenic is low in the front hopper but much higher in the rear hopper—over an order of magnitude higher. The arsenic concentration in the front hoppers increased dramatically with the additional fine particles, but there was also an increase in the rear hoppers from the additional ultrafine particles collected there. We also concluded that arsenic, selenium, sodium, and other pollutants that have similar boiling and melting points are concentrated in the fine particulate.

Where Do Fine Particles Come From?

The most difficult-to-control fine particles are formed in the combustion process. The size of the coal particle injected into the flame is on the order of 100 to 500 microns in a typical pulverized coal-fired boiler. With 10% ash you might expect 10- to 50-micron ash particles, however PM2.5 particles will form in the coal combustion process. The propensity for a coal particle to produce PM2.5 or PM0.1 is fuel specific and depends heavily on the level of volatiles, the amount of moisture, and the structure of the particle itself. As the heat from the combustion process causes the moisture and volatiles to boil, pressure builds up inside the coal particle and may result in the particle shattering, thereby forming much finer particles. Lower-rank coals tend to have more volatile content and more inherent moisture and therefore produce more fine particles.

These coal characteristics are the primary driver for PM fineness, but the combustion process also defines fine particle formation. The process used to inject coal into the furnace and the rate at which coal particles are heated in the combustion process can also affect the PM fineness produced. We have found that the process is highly dependent on burner configuration and, in particular, low-NOx burners will increase combustion PM fineness. The rate at which the particle is heated is the key factor, and changes to the process that increase this rate of heating will increase the probability that the coal particle will shatter, thereby increasing the amount of fine particulate generated.

Also, low-NOx burners on a wall-fired boiler take air away from the secondary air injection that is injected around the coal injection nozzle to stabilize the flame front. Removing some of this air will cause the flame front to move closer to the injection nozzle, thus reducing the time that the particle has during its initial heating phase of the combustion process. An increased rate of heating the particle increases the probability of the particle shattering and forming finer particulates, as evidenced by an increase of opacity, which is common after the installation of low-NOx burners. However, there won’t be a significant increase in total particle mass emissions. Such results suggest that many of the large particles are now forming multiple fine particles, which have a large impact on opacity, but the mass emission remains more or less the same because the total mass of ash does not change.

Do You Have a Fine Particulate Problem?

You can ascertain the level of fine particulates being emitted from a particular coal-fired boiler by plotting your emission characteristics on the Indigo Particulate Matter Emission Map or I-Chart, a graph of opacity versus total mass emission. An example of the I-ChartProblem, which depicts the particle size problem, is shown in Figure 3. This example plots opacity, in percent, against PM total mass emissions, in lb per million Btu. (The mass emissions could also be expressed in mg/m3, grains/ft3, lb per million acfm, or many other common units.) The green area represents the currently defined compliance requirements for a coal-fired power utility. 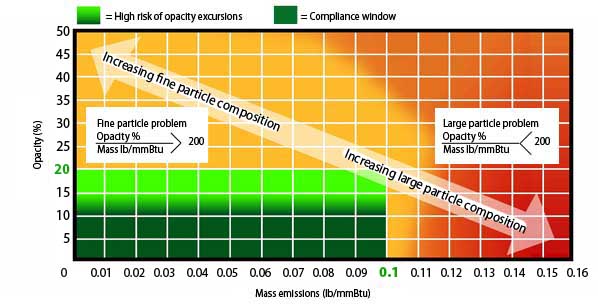 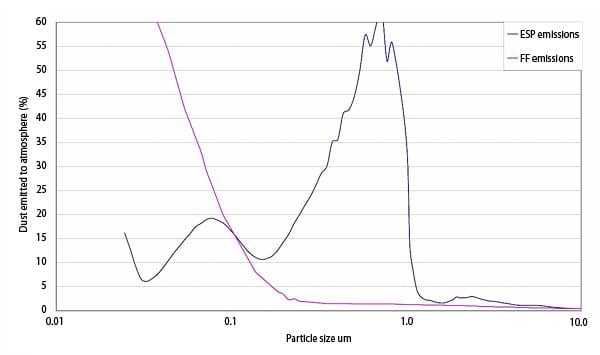 How Do You Fix Fine Particulate Emissions Problems?

The Indigo I-Map (Figure 5) is a plot of the potential solutions for a PM emissions problem. If your emissions have a high component of large particulates, as shown by the red area of the I-Map, then you need to address problems in your ESP or fabric filter. The orange area means you need to pay attention to your dust-collecting device, as it is probably contributing significantly to your problem; however, the Indigo Fine Particle Control System (FPCSystem) may also help in this region. We’ll come back to this figure shortly to discuss actual test results. 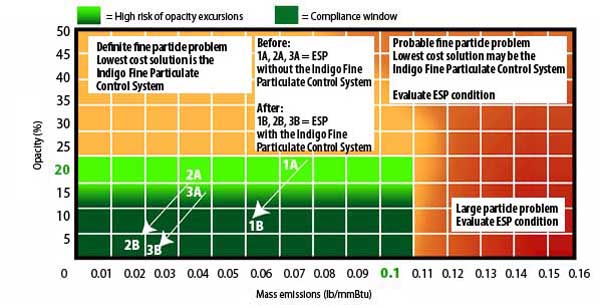 5. The Indigo Particulate Matter Emission Map (I-Chart Solution). The green region is the area for compliance. The light orange  region is where the FPCSystem, a technology designed to reduce fine particulate emissions, may be used to bring emissions into compliance. The orange area indicates that the dust-collecting device needs attention. The red area indicates a problem with the ESP or fabric filter. Source: Indigo Technologies LLC

The FPCSystem uses two key processes to reduce fine particle emissions. A bipolar charger is used to charge half of the dust positively and half negatively. The bipolar charger has a series of alternating positive and negative parallel passages that the gas and dust pass through to acquire the positive or negative charge (Figure 6). The second key process is a specially designed mixing system that causes the fine positive particles to be carried by the gas and mixed with the large negative particles emitted from the adjacent passage. This mixing system also cause the fine negatively charged particles to mix with the large positive particles. This results in the oppositely charged particles attaching to each other and forming agglomerates, as shown in Figure 7. 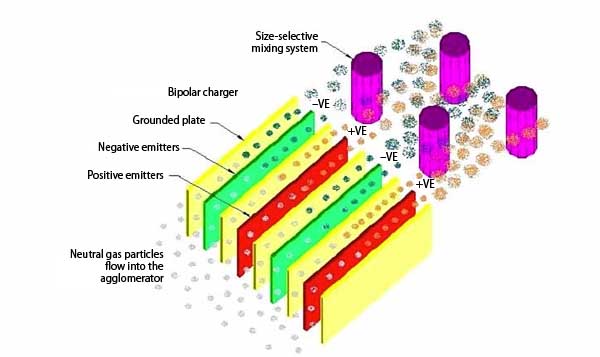 The FPCSystem was installed on Unit 4 at Southern Company’s Watson Power Plant, a baseload 250-MW opposed-wall-fired boiler with two separate exhaust gas treatment and monitoring systems. The completely separate but identical parallel passes were ideal to demonstrate the FPCSystem process against a real-time baseline. Each system has an Environmental Elements Corp. rigid-discharge electrode ESP rated at 234 ft2 per 1,000 acfm. The FPCSystem was installed in the 4B exhaust gas treatment system between the air heater and the ESP (Figure 8). 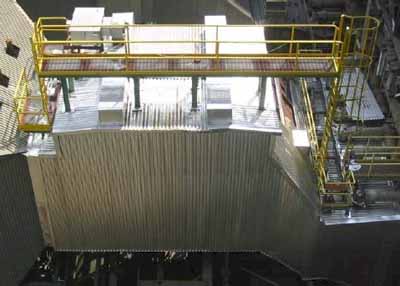 On-line opacity monitoring and dust mass load tests also revealed significant improvements in the performance and operation of the ESP with the FPCSystem installed. The installation on Watson Power Plant’s ESP 4B was monitored for over two years, during which time a range of coals was burned. The data show a 50% reduction in opacity for ESP 4B over 4A regardless of the coal burned at the plant (Figure 9). 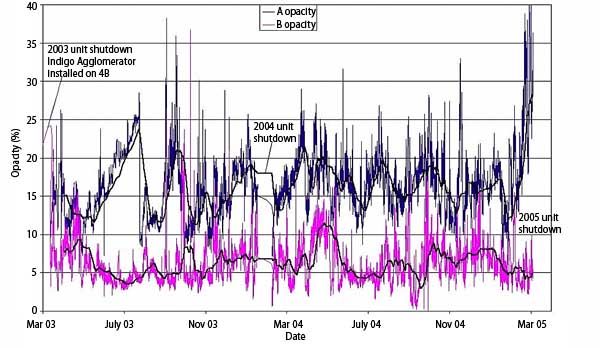 9. This graph shows the two-year opacity trend for Unit 4’s “A” and “B” electrostatic precipitators at Watson Power Plant. An Indigo FPCSystem was installed on 4B ESP. Source: Indigo Technologies LLC

The test results at Watson Power Plant are also shown on the Indigo I-Map (Figure 5). Points 1, 2, and 3 were measured on the ESP that did not have an FPCSystem installed; points 1A, 2A, and 3A represent data collected from the IA-equipped second ESP on the same unit. As can be seen from these results, the FPCSystem reduced both opacity and total mass emissions, but the opacity reduction was much higher.