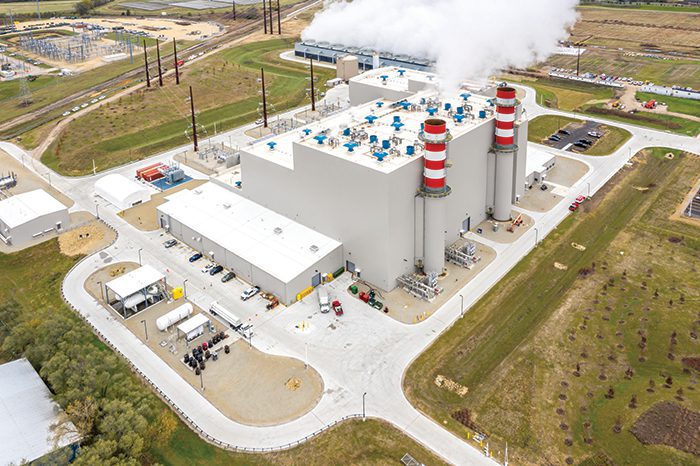 Madison, Wisconsin-based Alliant Energy serves nearly a million electric customers and more than 420,000 natural gas customers over a 54,369-square-mile service territory covering parts of Iowa and Wisconsin. Alliant Energy aspires to achieve net-zero carbon dioxide emissions from the electricity it generates by 2050, and the company created a Clean Energy Blueprint to help guide the way.

Yet, the company is committed to delivering affordable and reliable power to meet the needs of customers. That’s one of the reasons why the West Riverside Energy Center, a highly efficient 730-MW combined cycle natural gas generating station located near Beloit, Wisconsin, is so important. The state-of-the-art station, a 2021 POWER Top Plant award winner, can ramp its output up and down quickly, which nicely complements Alliant Energy’s transition to renewables.

Sound Due Diligence and a High-Quality Team

Significant analysis went into the decision to add West Riverside to the Alliant Energy fleet. In fact, seeds for the station were first planted back in November 2013, when the company formally began a feasibility study to evaluate new generating resource options. A request for proposals was issued in June 2014. The goal was not only to meet peak load requirements for customers, but also to maintain reserve margins required by the Midcontinent Independent System Operator (MISO).

AECOM was selected as the engineering, procurement, and construction (EPC) contractor for West Riverside. Contracts were signed and ground was broken on the project in June 2016. AECOM’s scope included management, design, supply, installation, and startup of the facility. It self-performed some of the work, while also hiring other subcontractors. HDR contributed to the project as the Owner’s Engineer.

Alliant Energy worked closely with contractors and labor unions to ensure that the highly skilled labor resources needed for the project were available. During construction, more than 1,000 jobs were created and millions of dollars were spent to support Wisconsin businesses.

Much emphasis was placed on health and safety programs during the project. Contractors and subcontractors developed comprehensive procedures; held weekly training on common hazards such as falls, trenching and excavation, and exposure; and focused on proper use of personal protection equipment. Monthly site inspections were also performed to ensure safety hazards were identified and eliminated.

To promote safety on the project, the general contractor entered the Occupational Safety and Health Administration’s (OSHA’s) Strategic Partnership Program. The program provides opportunities for employers and workers to partner with OSHA to enhance workplace safety and health practices. The partnership helped the project establish specific goals, strategies, and performance measures to improve safety performance.

In the end, the project finished with more than three million work hours completed and a very respectable safety record. The OSHA Recordable Incident Rate was 1.28 and the project’s Lost-Time Accident Rate was a remarkable 0.00.

During the construction phase of the project, the Town of Beloit Fire Department (BFD) visited the project site on multiple occasions to become familiar with the layout of the facility and to conduct drills such as testing notification systems, reviewing site access routes, and familiarizing responders with emergency pathways and possible dangers. These visits enabled the BFD to understand the real-world application of their safety training for construction and operational facilities. Additionally, West Riverside hosted an Emergency Response Drill scenario with the BFD to practice a rescue mission.

No Project Is Complete Without Its Challenges

The plant was expected to be fully enclosed before winter hit. However, cold temperatures and snow arrived before all permanent enclosures were completed. Therefore, constructing the project while dealing with frigid Wisconsin winter weather during peak construction times was one of the project’s biggest challenges. Construction crews were forced to use temporary walls and doors on buildings, as well as temporary heaters, before permanent enclosures and heat were available. Therefore, spaces had to be regularly deiced and dewatered in order for work to continue.

As a proactive measure, an earthen berm was constructed on the southern edge of the property to help mitigate noise concerns to the south. The results have been positive. Another aspect designed to benefit the local community was installation of a plume abatement technology on the plant’s cooling towers.

Plume abatement towers work by passing outside air through a lower, warm, wet section of the tower, where it is heated. Above that, the cool, high-humidity air flows past coils of warm water from the circulating water system. The two streams are then mixed together before the cooling tower fans, where the humid air is warmed and moisture is greatly reduced by lowering the wet-bulb temperature at the discharge of the fan stacks. Alliant Energy had utilized this technology on a slightly smaller scale at its existing Riverside plant, but this was the first time the company had used the solution on a plant the size of West Riverside. Still, the lessons learned from the previous application helped make the larger-scale installation a success.

To complicate matters for project managers, the COVID-19 pandemic struck while punch-list items were being checked in early 2020. This forced social distancing guidelines and other additional safety measures to be implemented. Crews were divided into small groups and spread across the facility. Although an unexpected and unprecedented challenge, the team managed the safety protocols and continued to make progress. Ultimately, care, custody, and control of the West Riverside facility was turned over to Alliant Energy on May 15, 2020, and the station began providing power to customers (Figure 1). Substantial completion was declared on July 22, 2020. Despite the challenges, the project was delivered $30 million under budget and was online in time to meet increased summer demand.

Several other aspects make West Riverside notable. For example, Alliant Energy integrated a 6-MWDC solar farm into the project. The photovoltaic panels are located on the southern portion of the site where the laydown yard had been during construction. The power generated from the solar array feeds into the plant’s auxiliary electrical system offsetting house loads and allowing additional power to be supplied to the grid. The project team also minimized the plant’s auxiliary load by using variable-speed motor drives, optimizing lighting, and installing solar-powered exterior lighting. As a result, West Riverside’s auxiliary consumption is nearly 75% more efficient than industry standards.

The facility is designed to minimize water use too. A pretreatment system is used to soften well water coming into the plant. This allows about eight to 10 cycles in the cooling tower, compared to only four or five cycles at the adjacent Riverside Energy Center, which doesn’t have the same treatment system. Further, because of Wisconsin’s stringent nutrient discharge limitations, the project team undertook a phosphate reduction process at both Riverside and West Riverside.

To further reduce makeup water needs, West Riverside collects stormwater by routing treatment building downspouts into the cooling tower basin. This is estimated to reduce freshwater use by about 70,000 gallons annually.

“This facility is one of the most efficient natural-gas facilities in the nation,” said Bob Newell, project manager for Alliant Energy. “Designed and built for efficiency and long-term sustainability, it features the latest technologies and state-of-the art water treatment processing equipment. In addition, we can rapidly adjust its output to meet demand. It’s a nice complement to our growing clean energy investments.”

The sustainability features implemented at West Riverside have not gone unnoticed. The Institute for Sustainable Infrastructure (ISI) recognized the project by granting it the prestigious Envision Platinum rating for sustainable infrastructure. The Envision rating system is a comprehensive framework of 64 criteria encompassing a full range of environmental, social, and economic impacts to be assessed in order to determine how a project has incorporated sustainability into its design, construction, and operation. The Platinum rating is the highest Envision recognition level.

“We are proud of the recognition our West Riverside Energy Center continues to earn for its sustainability design and infrastructure,” said David de Leon, president of Alliant Energy’s Wisconsin energy company. “This facility is a result of the strong partnership with the Beloit community, HDR (our owners project engineer) and AECOM along with a number of their subcontractors. Earning this recognition demonstrates our commitment to delivering reliable and affordable energy to our customers, while building stronger communities.”