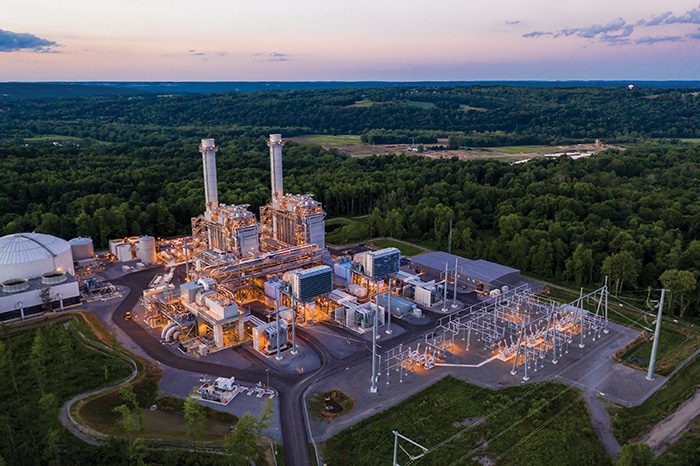 It took a team effort, led by Kiewit as the engineering, procurement, and construction (EPC) contractor, to overcome numerous challenges and build a 1,000-MW natural gas-fired facility that has sparked a regional renaissance.

A power plant often provides a region with more than just electricity. A large generation facility can also be an economic engine for an entire community.

The Hickory Run Energy Center (Figure 1, and above), a 1,000-MW natural gas-fired combined cycle power plant, has proven to be just that for Lawrence County in Pennsylvania. Tyr Energy LLC is the asset manager for the plant, located in New Castle in North Beaver Township, about 45 miles northwest of Pittsburgh. The facility has been a driving force behind more than $1 billion in capital investment projects in the county over the past few years, providing even more of a boost to the local economy after coming online in May 2020.

Hickory Run is contributing to a rebound in manufacturing in the New Castle area, a region with a rich industrial history, starting with iron and brick works in the mid-1800s and continuing for many years as a hub for iron and steel. The area for a time was known as the “Fireworks Capital of America,” during a period when more fireworks were produced in Lawrence County than anywhere else in the U.S., and the industry remains important to the region. New Castle was known as the “Hot Dog Capital of the World,” owing to the popularity of the chili dogs produced by Greek immigrants who settled in the area.

The area today is known as a regional banking hub, and its location near several major highways—along with the power provided by Hickory Run—is supporting a manufacturing renaissance. The plant’s importance to the region, along with the perseverance of its builders in overcoming construction obstacles, has led POWER to recognize it with a Top Plant award.

Kiewit Power Constructors Co. (Kiewit) was awarded the EPC contract in 2017. Siemens Energy was contracted in November 2017 to supply the key components of the plant, including the turbines and generators. The scope of the contract also included a long-term service agreement including advanced remote monitoring and diagnostics services for the combined cycle facility. NAES Corp., an affiliate of Tyr Energy, provides operations and maintenance services for the project.

The plant also includes a Veolia biological water treatment system along with advanced emissions reduction equipment. Veolia Water Technologies was contracted by Kiewit in December 2017 to provide engineering and procurement services for the raw and demineralized water treatment systems for the plant. The plant is equipped with selective catalytic reduction for the control of nitrogen oxide emissions, and an oxidation catalyst for the reduction of carbon monoxide and volatile organic compound emissions.

“In addition, the facility can meet its minimum emissions compliance at low loads, allowing the facility to support and stabilize the grid when solar and wind power generation is high,” said Blitek, noting another important aspect of the plant in support of growing renewable power generation. “The result is a facility that covers all the bases in support of safe, reliable power for the electrical service partners,” he said.

Construction on the project was started in August 2017. Several challenging situations—including managing the safety of the project team through the COVID-19 pandemic—were overcome in order to bring the plant online less than three years later.

Blitek told POWER, “The largest risk to the project was the potential shortage of labor due to the other industrial work happening in the area. Western Pennsylvania was very busy during this time and Kiewit focused early on working with the local unions and creating a project that was attractive to our craftsmen.” The project at its peak employed 752 workers; there are 23 full-time staff at the plant today.

Garrick Venteicher, CEO of Tyr Energy, marked the plant’s start of commercial operation in May 2020, saying his group was “pleased to have collaborated with two world-class partners, Kiewit Power and Siemens, to bring this important energy infrastructure project to completion. In addition, I can’t say enough about the support we received from Lawrence County and the local community. The highly skilled workforce from the surrounding area has been outstanding. We look forward to building on these relationships in the years ahead.”

Blitek told POWER the delayed delivery of several pieces of critical equipment impacted the project’s timeline, compressing Kiewit’s installation schedule by several months. Blitek noted that the team had to overcome several other issues during initial commissioning. Working closely with the OEMs (original equipment manufacturers) and the client, the project team managed to successfully start up and operate the plant at full capacity on schedule.

Blitek noted, “There were two occasions when the plant had to be shut down during commissioning due to multiple tube leaks. Each time the project team methodically made the repairs in a short time frame and restarted the plant in a timely manner to resume commissioning.”

“We are delighted that we contributed to this significant milestone of Hickory Run in collaboration with Tyr Energy and Siemens,” said Hiroshi Nakajima, Kansai’s managing executive officer in charge of International Business and Cooperation at that time. “Hickory Run is our first greenfield project in North America, which we recognize as one of the most important power markets. Kansai is committed to expanding its power business overseas by making active use of the technological strength and expertise cultivated throughout our company’s history.”

Blitek said several protocols were followed during the plant’s construction in order to ensure worker safety, including Kiewit’s LSA Program (Life Saving Actions & Standard Operating Procedures). “LSA is Kiewit’s Safety Diamond category program and a crucial component of a complete site-specific safety plan,” said Blitek. “It allowed the Hickory Run project team to be proactive about eliminating significant injuries and fatalities throughout the course of the project. The LSA Program ensured the project team identified the potential outcome of all incidents or events that could have posed danger to onsite personnel through developing meaningful plans to eliminate those events with potentially high-severity outcomes.”

Blitek also noted the CVIS Program (Craft Voice in Safety), which has a motto of “Developed for the craft, by the craft.” The program creates a safety culture where workers have a voice. “We promoted the idea that craftsmen/women should be taking care of each other, in a partnership with site management, through ownership, communication, and prevention to achieve Kiewit’s goal of ‘Nobody Gets Hurt,’ ” he said.

As Hickory Run has supported the local community, providing thousands of dollars to more than a dozen area charities, Blitek said that in turn, the project’s success has come in part because of its support from the community. “[The project had] general involvement, collaboration, and a great working relationship with the local unions and community at large of Western Pennsylvania,” he said.