Power plant managers are familiar with selective catalytic reduction (SCR), a technology to reduce emissions of nitrogen oxides from fossil-fueled generating plants. The regulatory battle over SCR was a key feature of the 1900s, and today SCR is a given in new, and many older, power plants. 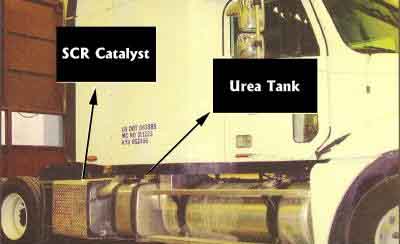 How SCR Works in Vehicles

The urea ((NH2)2CO) in a diesel vehicle is held in a separate tank. It’s injected as a mist into the hot exhaust gases, which break down the urea into ammonia, the actual NOx-reducing agent As it runs through a catalytic converter, the ammonia breaks down the NOx to harmless nitrogen gas and water vapor. According to Kim Doran, a spokesperson for the North American SCR Stakeholders Group, “The exhaust coming from the tailpipe of an SCR-equipped vehicle may actually be cleaner than the air around it.”

All new diesel vehicles will have tanks to hold the urea for injection into the exhaust stream, along with a catalyst, to reduce NOx emissions, per long-standing Environmental Protection Agency (EPA) rules. The automotive industry and the EPA have battled over NOx reductions for diesel vehicles for a decade. They ultimately settled on SCR as the technology of choice. But truck-maker Navistar is still arguing for a different technology, exhaust gas recirculation (EGR), that requires no urea. Navistar (nee International Harvester) appears to have lost the battle.

Starting January 1, 2010, all new diesel vehicles in the U.S. must have technology to remove 90% of NOx emissions, according to the EPA rules. SCR is the industry’s preferred technology. SCR injects “automotive grade” urea into the exhaust gas to scrub NOx from the tailpipe emissions. This has been the practice in much of Europe for years.

The tech-speak term for automotive urea in the U.S. is “DEF,” which stands for “diesel exhaust fluid.” In Europe, it is AdBlue, a trademarked name. Both are a water solution that consists of 32.5% urea and demineralized water. The technology, says Glenn Kedzie of the American Trucking Association, is the only technology able to achieve the EPA’s requirement for 90% reduction of oxides of nitrogen.

Urea is a major component of nitrogen fertilizer. Some fear that the diversion of this chemical to transportation will hurt farming. Amit Roy, CEO of the International Center for Soil Fertility and Agricultural Development, said, “We know about diversion of traditional food crops such as corn or sugarcane to biofuels like ethanol—but now urea, a basic input for food production, is also going into fuel. Ironically, cleaning our environment is a key reason for both technologies.”

Integer Research, a London-based consultancy, estimates that more than 500,000 trucks in Europe now use SCR, with the fleet growing by about 25,000 trucks per month. Doran, of the SCR stakeholders group, said Audi (Volkswagen), BMW, Hyundai, Kia, and Chrysler (Jeep) are adopting SCR for diesel passenger vehicles. Commercial truck builders including Freightliner, Kenworth, Mack, Peterbuilt, and Volvo are adopting the technology, said the trade group, as well as diesel engine makers Cummins and Detroit Diesel.

Will urea be readily available? Diesel fueling stations (including utility fleet fueling facilities) will have to have urea available for their vehicles. Given that consumption of the urea liquid is only about 3% of the diesel burn rate, experts anticipate that it will be easy to incorporate urea supplies at truck stops. Transport Topics, a trade publication, cited an estimate from a Mack Truck engineer that his company’s engines would use three gallons of DEF, at most, for every 100 gallons of diesel. For fleet operations, “intermediate bulk containers” with a 275-gallon capacity, are readily available. Transport Topics reported late last year that major truck-stop chains were ready for the transition to urea fueling.

But the EPA NOx reduction requirement will have a hefty cost. Trucking industry estimates are that the urea requirements will add $10,000 to the cost of a $100,000 vehicle, a 10% premium that will have to be recovered.

The Coming Fight over Retrofits

What’s next? Industry fears the EPA will move to requiring SCR retrofits on diesel vehicles. The American Trucking Association web site notes, “While EPA is pursuing ‘voluntary’ retrofit measures, states such as California are pursuing regulatory measures to mandate retrofits on all diesel engines including on-highway medium-and heavy-duty trucks.” The trucking trade group said it is working to “prevent retrofit mandates and is exploring funding options to carry out voluntary retrofit programs.”