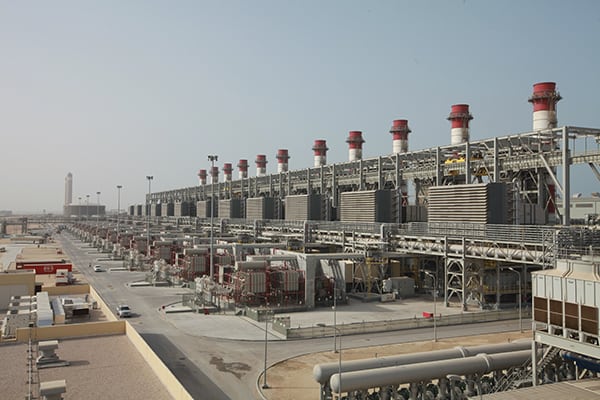 Take one of the largest gas-fired plants in the world. Add 50C (122F)–degree heat and frequent heavy sand storms. Then slot it into a three-year construction schedule. What you get is a combined cycle behemoth with some unique technology and a multi-faceted team that pulled off a massive job.

The Kingdom of Saudi Arabia is facing major population growth over the next several decades and, with it, rapidly growing electricity demand. In 2013, the country generated 292.2 TWh of electricity, which represents a year-on-year increase of 7% over 2012 alone, according to the 2014 BP Statistical Review of World Energy, and more than double that generated in 2000.

Despite that rapid growth, the country has struggled with razor-thin reserve margins, which have hovered around 3% in recent years, sometimes resulting in rolling blackouts during summer months. In response to this challenge, Saudi Arabia has one of the most ambitious plans for its generating capacity in the world: By 2032, it hopes to double its current capacity of around 60 GW to 120 GW, a process that will require tens of billions of dollars in new investment.

Though it plans to greatly expand its currently small renewable generation segment, as well as begin generating nuclear power, the bulk of the nation’s power is likely to continue to be fossil fuel–based—not surprising for a country that holds a substantial portion of the world’s oil and gas reserves.

Because Saudi Arabia’s population is concentrated in a few urban and industrial areas, very large power plants are the norm, with some operating as many as 40 gas turbines on the same site.

The country’s electricity sector is dominated by the Saudi Electric Co. (SEC), which owns nearly all of the generating capacity—about 58 GW. Still, efforts have begun to liberalize the national electric market. One change was allowing the national oil company, Saudi Aramco, to sell excess generation from its captive plants through the SEC.

But to help meet the enormous demand for new generation and attract foreign investment in its power sector, the Saudi government elected to begin allowing independent power producers (IPPs) to build and operate their own power plants. This required a number of changes in how power plants were financed in the Kingdom. To help make it an attractive target for investment, the Saudi IPP program was set up to ensure power purchase agreements (PPAs) would reflect the costs of capital and returns.

One such IPP is the Hajr Electricity Production Co., a joint venture of SEC (50%), Saudi firm ACWA Power (17.5%), Samsung C&T (17.5%), and Mena Fund (15%). Hajr was formed specifically to develop, build, and operate the Qurayyah Combined Cycle Power Plant. Samsung C&T would be the engineering, procurement, and construction provider, and SEC would be the sole customer for its electricity under a 20-year PPA. Despite the project’s enormous size, financial closing was achieved seven months after contract signing.

The site was chosen to leverage several advantages. First, it was in the center of an industrial hub, with much of the demand fairly close by. It was also close to natural gas supplies, meaning relatively little new fueling infrastructure would be needed. Finally, the location along the coast meant seawater could be used for cooling. That was an advantage, as the hot climate in Saudi Arabia makes air-cooled condensers much less efficient.

The contract was signed in September 2011, and notice to proceed with construction was received from the government in December. Qurayyah was initially planned for around 2 GW of total capacity, but the nation’s ever-growing demand caused that goal to be doubled—on the same schedule. The end result is one of the largest combined cycle plants in the world. The facility is composed of six separate power blocks, each comprising two Siemens SGT6-5000F gas turbines feeding two BHI heat recovery steam generators and a single SST6-4000 steam turbine. Each turbine drives a Siemens SGEN6-1000A generator.

The first power block was commissioned in December 2013 and entered commercial operations the following August. The last block came online in March 2015, when the 4-GW plant was declared operational, an impressive three years and three months from start of construction.

The first was the ambient conditions, where summer temperatures can top 50C while falling below 10C in the winter. Heavy sand storms that can wreak considerable havoc with normal operations are also common.

To deal with the constant sand and dust, all the major equipment is located inside dedicated buildings or climactic enclosures (Figure 1). The gas turbines, meanwhile, are equipped with automatic pulse air cleaning of the inlet filter elements.

The extreme heat required special measures. A specially designed inlet chilling system supplied by Stellar Energy was added to reduce inlet temperatures and keep efficiency high. While gas turbine inlet chillers are nothing new, this one came with some added bells and whistles because of the extra demands it would face.

Two separate chilling plants were built in order to supply chilled water to the turbine inlets, each plant serving three power blocks. The chillers supply water at 7.2C to the inlet air coils, reducing inlet air temperatures to 15C during normal operation. They also supply chilled water to cool the turbines and turbine generators, and return condensate to the chilling stations.

Each chilling system includes a thermal energy storage (TES) tank, holding up to 180,000 refrigerant-tons, that allows the system to shift peak cooling demands to off-peak. In other words, it can generate and store chilled water during off-peak periods and store it for use when chilling demand is highest. The chilling systems operate 24 hours a day, with excess cooling being stored in the TES tanks. When chilling demand exceeds chilling capacity, extra chilled water is drawn from the tanks.

According to Hajr Project Control & Planning Manager Ahmad Waraich, the system has been working admirably, keeping the plant running smoothly despite the harsh conditions. Even with the parasitic demands of the cooling system, Qurayyah can achieve 52% efficiency, making it the most efficient plant of its kind in the country.

Other adjustments had to be made because of the size and complexity of the plant. The substation that handles the plant’s enormous output is fully automated and one of the largest and most advanced in the country. Though Qurayyah has the advantage of using seawater cooling, the intake system is many times larger than at most plants. Because of the shallow water of the Gulf, a 1.4-km-long pipeline had to be laid across the sea floor.

The second challenge was the aggressive schedule, which required rapidly identifying the critical path and freezing the design and procurement of thousands of pieces of equipment as quickly as possible. To complete a 4-GW plant in a schedule originally intended for half that, things had to be done differently.

To speed up the initial design process, Hajr, Samsung C&T, and Siemens held regular design review sessions. Long-lead-time items were identified up front, and purchase orders were placed well in advance for major components. Dedicated teams were set up to speed up logistics, and site leveling and foundations were completed in time to allow immediate placement of major equipment when it arrived on site.

The project was divided into several sub-projects, with multiple sub-contractors working in parallel rather than engaging one subcontractor for each type of work. This approach provided a greater amount of flexibility, as adjustments could be made without any lost time. Likewise, multiple commissioning teams were formed to allow parallel commissioning of the blocks. While this was challenging from a construction management approach, building so much generation on the same site allowed the team to capture considerable economies of scale that would not have been available when building multiple smaller plants.

During the project’s peak construction period, the difficulties with the aggressive schedule were compounded by administrative changes to local labor laws, which resulted in substantial labor shortages across the Kingdom, affecting not just Qurayyah but also other major projects. To address this problem, the team was forced to reach out and recruit additional labor from worldwide markets and supplement the craft supervision with experts from South Korea.

Despite the size and complexity of the project, and a freak storm that caused several weeks’ delay, Qurayyah was completed with only two lost-time accidents over more than 48 million man-hours worked.

The efforts of the construction team and plant management in building such a huge plant in such a short period of time, while achieving reliable operations, have not gone unnoticed. In addition to POWER’s Top Plant recognition, Qurayyah has also been honored by other organizations. It was named Power & Water Project of the Year by MEED in its 2015 Quality Awards, and received the ACWA Power Safety Award in 2014. The project was also honored by several groups for its innovative financing approach.