Petra Nova, the U.S.’s first and world’s largest commercial post-combustion carbon capture system at a power plant, is distinctively both a globally significant environmental breakthrough and a trailblazing revenue-generating facility. Putting this $1 billion project online on time and on budget—despite a chaotic policy climate and other challenges that sank similar projects—was a top priority for its investor-owned owners and project partners. 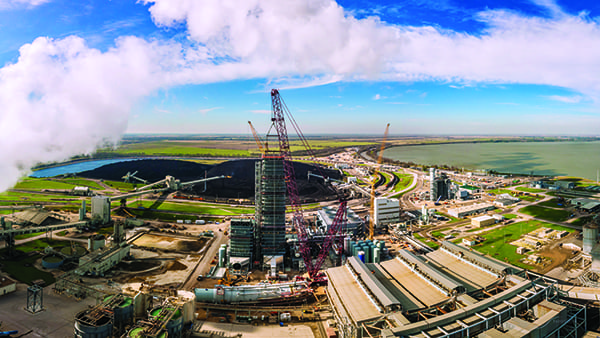 The Princeton, New Jersey-based energy company on Sept. 24 said it would accelerate carbon goals it set in 2014 to reach its 50% GHG reduction target (from a 2014 baseline) by 2025—not 2030 as originally envisioned—because it has already achieved a 37% reduction to date. NRG said it would also seek to achieve net-zero emissions by 2050, surpassing its original 2014-set goal of a 90% reduction.

NRG’s announcement comes on the heels of separate revisions by Duke Energy and American Electric Power of their carbon dioxide emissions reduction targets. Both companies said they would seek to go net-zero by 2050. On Sept. 26, Michigan utility DTE Energy also announced it was aiming for net-zero carbon emissions by 2050.

As Dan Bakal, senior director for Electric Power at Ceres, a sustainability nonprofit that works with investors and companies to pursue a business case for sustainability, told POWER last week, the announcements point to a trend where companies are “ratcheting up of ambitions as they get more confident in their ability to set goals.”

Importance of a 1.5-Degree Goal

But NRG’s new goals are specifically worthy of attention because they are based on science-based reductions necessary to contain global warming to 1.5 degrees Celsius (1.5 degree C) above pre-industrial levels, as recommended by the Intergovernmental Panel on Climate Change (IPCC) in a special report last year. GHG reduction targets are considered “science-based” if they are in line with what the latest climate science says is necessary to meet the goals of the Paris Agreement, Bakal explained.

Industry experts note NRG was already a pioneer in carbon reduction target setting. It became one of the first U.S. investor-owned companies to commit to a science-based target in 2014, when it established a goal to reduce absolute GHG emissions 50% by 2030 and 90% by 2050. In 2015, it also became the first company in the power sector to earn the endorsement of Science Based Targets Initiative (SBTi), which is a collaboration of international organizations Carbon Disclosure Project (CDP), World Resources Institute, the World Wide Fund for Nature, and the United Nations Global Compact to champion science-based target setting.

According to We Mean Business, a climate change international coalition, that’s important because companies that want to set science-based emissions reduction targets must go through a rigorous process. It requires that they first submit a commitment letter to SBTi, indicating that they will work to set a science-based target; then they must develop and submit the target for validation against SBTi criteria before announcing the target.

From a market perspective, the accelerated carbon reduction timeframe is also notable for NRG Energy, which operates almost purely in competitive wholesale power markets. About 34% (7.9 GW) of its 23-GW generation fleet was coal-fired at the end of December 2018. Another 43% (10 GW) was gas-fired, and 15% (3.6 GW) was oil-fired.

The overall effect of the new goals on NRG’s generation fleet will depend on a number of factors, NRG told POWER on Sept. 26. “As a competitive generator a number of factors including but not limited to, the demands of our customers, the regulatory environment and costs of resources, all contribute to the long-term economics and lifespan of our generation fleet,” it said.

Owing in part to its previous carbon commitments, NRG in 2017 built and operates Petra Nova, the world’s largest commercial post-combustion carbon capture system at a power plant (POWER magazine’s 2017 Plant of the Year) with partner JX Nippon. This landmark $1 billion project leverages operations of the existing W.A. Parish Unit 8 and a maturing oil field using proven carbon capture technology. But it is unlikely that the company will build a similar project, even though project contractor Mitsubishi Heavy Industries says costs to build a next-generation carbon capture facility with technology improvements gleaned from Petra Nova could be nearly 30% less.

Much of NRG’s progress to slash its GHG emissions by 37% from a  2014 baseline is due to “fleet optimization, coal-to-gas retrofits, and investment and operation of the Petra Nova CCS project,” Knox said. To meet its 2050 net-zero goals, “we imagine many of these initiatives will continue, while evaluating and adopting new and forward-leaning technologies as they become economic,” it said.

Future carbon reductions may also likely entail more coal plant closures or divestments, which fits with the company’s current business strategy. In a bid to reduce risk from wholesale power price volatility in competitive markets, NRG is in the midst of a three-year transformation plan to reduce corporate debt, streamline its generation portfolio, and stimulate growth of its retail business. As part of those efforts, last year it shed the bulk of its renewable assets under NRG Yield, as well as 3.6 GW tied to its South Generating business. If assets it relinquished to GenOn when that former coal-heavy subsidiary filed for bankruptcy in June 2017 are considered, NRG’s fleet has shrunk by more than half to 23 GW over the past two years.

Asked if the company now plans to invest heavily in renewables, though it recently spun off NRG Yield, NRG said the company will continue its “capital-light strategy” to provide competitively priced renewable offerings to its residential, commercial, and industrial customers. Retail sales, both of power and natural gas, have grown into an increasingly lucrative business avenue for the company, and NRG is now heavily focusing heavily on “personal power” solutions—such as residential solar—and business solutions for commercial and industrial customers. “In August, we announced entering into power purchase agreements with third-party project developers and other counterparties, totaling approximately 1.3 GW, and we expect to continue evaluating and executing agreements such as these that support the needs of our integrated platform,” it noted.

Still, the company acknowledges that its financial performance may be impacted by price fluctuations in the retail, wholesale power, and natural gas markets, and it notes in financial filings that the potential effects of climate change pose specific market and economic risks. As Laurel Peacock, director of Sustainability at NRG Energy, told POWER earlier this year, the company’s climate goals are deeply entrenched in its business strategy.

“Managing your organization’s GHG emissions is about managing risk—and tapping into opportunity—which makes good business sense,” she said. “For NRG, setting a science-based target directly answered the needs of our customers, many of whom are thinking about their own carbon footprints. It is critical for stakeholders, who need to know that we are thinking of potential risks, in the short, medium, and long-term.”

In a statement Tuesday, Mauricio Gutierrez, NRG Energy president and CEO, also suggested the goals are part of the company’s social responsibility initiatives. “Addressing climate change is a priority for our company as it presents one of the greatest challenges and opportunities of our time,” he said. “By realigning our carbon reduction efforts to the new climate imperative, we create value for all stakeholders and lead our sector towards achieving a sustainable future.”

Updated (Sept. 26): Adds comments from NRG spokesperson, which clarify how the carbon goals could affect the company’s generation fleet, and corrects capacity percentage of oil-fired generation.