Two formidable U.S. coal power generators this week separately revised their carbon dioxide emissions reduction targets. Duke Energy announced it would achieve net-zero carbon emissions by 2050. American Electric Power (AEP), meanwhile, said it would extend its target from 60% to 70% from 2000 levels by 2030, and by more than 80% by 2050—but it also outlined an “aspirational emissions goal” of “zero emissions by 2050.”

Both companies cited customer preferences and risk mitigation as reasons for the steep carbon cuts. But while they recently exited competitive wholesale markets to contain risks, both companies also announced they are actively investing substantially in renewables sited in competitive markets.

The announcements follow new goals by a slate of power companies as well as U.S. states to substantially slash their carbon emissions, as concerns about climate change ramp up. And they are another major indication that the power sector is positioning itself at the heart of global decarbonization, Dan Bakal, senior director for Electric Power at Ceres, a sustainability nonprofit that works with investors and companies to pursue a business case for sustainability, told POWER on Sept. 18.

Duke Energy on Sept. 17 said it set the new target to produce zero carbon emissions from electric generation by 2050 follows “strong progress” it has already made in reducing carbon emissions 31% since 2005 (from 153 million metric tons in 2005 to 105 million tons of carbon dioxide in 2018) by adding renewables—including 4 GW of solar—retiring coal units, and replacing them with more efficient natural gas units.

It means the company is on track to surpass its previous 2017 goal to slash emissions 40% by 2030 (and reduce its carbon emissions to 92 million tons). It also means the company already ” meets or exceeds the standards of the former Clean Power Plan and the 2025 U.S. commitment to the Paris Agreement,” it said.

Owing to “low natural gas prices and declining costs for renewables and storage,” Duke Energy on Wednesday said it will now pursue a carbon goal of at least 50% by 2030. According to Vicky Sullivan, the company’s environmental policy lead for climate and air issues, that will put the company on a path to get its carbon emissions “to close to zero” as possible by 2050. “With evolving technologies such as carbon capture, there are likely to be some residual CO2 emissions, so the company will evaluate the need for offsets or credits in later years as needed to be net-zero,” she said.

Duke Energy noted that timelines will vary in its vast service areas—all of which are regulated—owing to to different state generation mixes and different regulations. “We know our customers want clean energy at an affordable price, so we want to allow time for good dialogue among regulators, customers, communities, shareholders and us as we work toward this common goal,” Sullivan said. That’s one reason the company has rolled out “products and initiatives” that are customized in each state—a solar leasing program in Indiana, and community solar in South Carolina, for example.

But reaching the 50% by 2030 goal will require a near-doubling of the company’s renewables capacity by 2025, and it will need to depend heavily on energy storage. According to Duke Energy’s May 2019–released 2018 sustainability report, coal made up 33% of its Electric Utilities and Infrastructure division’s 50.8-GW portfolio (though coal produced only 32% of its net output). The division’s renewables, made up mostly of hydro and solar, made up 7% of its capacity portfolio, but generated only 2% of its net output.

Duke Energy Renewables, a separate division that acquires, develops, and builds wind and solar plants—and includes non regulated assets—owned another 2,991 MW across 18 states—77% which was wind, 22%, solar, and 1% storage. 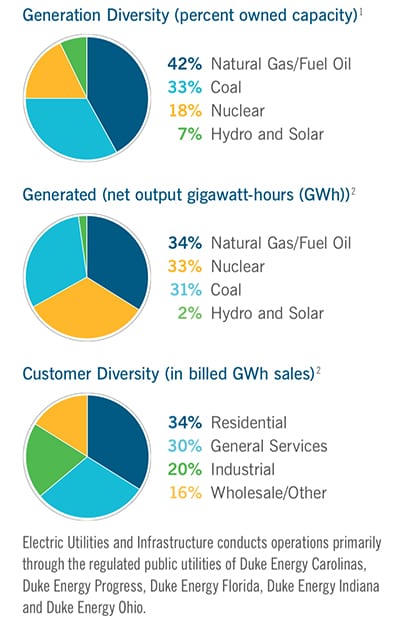 “Technology breakthroughs” will also be crucial to meet its new goal, Duke Energy acknowledged. These include “longer-lasting energy storage (months rather than hours), commercial-scale and cost-effective carbon capture and storage, and new nuclear technologies,” the company said. “We hope these technologies—and perhaps others—will fill the need for dispatchable, load-following carbon-free generation that supplements renewables in later years.”

“All in all, this is an incredibly exciting and dynamic time to be in the energy business,” Sullivan said. “As more and more utilities, regulators and communities grapple with how to make decisions to address climate change, we’ll have to collaborate on R&D investments, policies and regulatory models that navigate this new reality.”

Meanwhile, on Sept. 18, Columbus, Ohio–based AEP also said it is slashing carbon dioxide emissions “faster than anticipated,” which is why it revised its 2030 reduction target to 70% from 2000 levels (when its carbon emissions stood at 167 million tons) from its previous target of 60%.

At the end of 2018, it had already cut its emissions by 59% (69 million tons)—exceeding targets set by the now-defunct Clean Power Plan—and it was “confident” that by 2050, it would further slash emissions by “more than 80%,” it said.

However, Nicholas K. Akins, AEP chairman, president and chief executive officer in a statement said the company will also shoot for an “aspirational emissions goal is zero emissions by 2050.” The shift would “mitigate risk for our customers and shareholders alike and will ensure a more resilient and reliable energy system into the future,” he said.

Like Duke Energy, AEP’s strategy will focus on “modernizing the power grid, expanding renewable energy resources and delivering reliable energy to our customers,” said Akins. That means the company will now boost investments in renewable generation, and transmission and distribution to enhance efficiency, and expand demand and reposes and energy efficiency programs. It will require a drastic reduction in coal power—which in 2018 represented 47% of AEP’s generating capacity, a number that has fallen from 70% in 2005, owing to retirements of nearly 7.8 GW since 2011.

AEP’s resource plans, meanwhile, currently call for adding more than 8.6 GW of new wind and solar generation to serve its regulated utility customers by 2030. And, like Duke Energy, it is also investing in renewables in competitive markets. “Between 2019 and 2023, the company plans to invest approximately $2.2 billion in contracted renewables and renewables integrated with energy storage. AEP already added 1,302 MW of contracted renewables to its portfolio this year,” it said.

But the shift to a low-carbon profile will also require “technological advances, including energy storage,” which would “determine how quickly we can achieve zero emissions while continuing to provide reliable, affordable power for customers,” Akins said. And while the company has no plans to build another coal plant, it said that if carbon capture and storage technologies are “demonstrated commercially to improve the scalability and cost-competitiveness of low-carbon fossil-fueled power generation in the future, we would want to have those technology options available for consideration.”

Bakal, who oversees electric power sector research, shareholder engagement, and examines environmental risks at Ceres, told POWER the two companies’ new goals were encouraging because they suggest “there’s this ratcheting up of ambitions as they get more confident in their ability to set goals.”

It’s almost as if “there’s a game of leapfrog that’s now happening,” he noted.

The impetus propelling the power sector toward low-carbon strategies appears to be its quest for sustainable business practices, Bakal said. “Investors are having an impact because it’s such a sizable group of investors, and they’re not looking at this as a one-off discussion. They’re really engaging deeply,” he said. “What the [power companies] are recognizing now is that there’s a really sizable portion of their shareholder base that are likely in it for the long term, and they’re concerned about major societal risks and how companies are managing those.” At the same time, “it’s definitely true that customers are having an impact, really demanding clean energy and 100% renewable energy,” he said.

That impact is only slated to increase. Publication of the Intergovernmental Panel on Climate Change (IPCC) special report on the impacts of global warming of 1.5 degrees Celsius (1.5 degree C) above pre-industrial levels is drawing interest and has underscored the urgency of immediate action. “We’re seeing more goals that are closer in alignment with the 1.5-degree-C or well-below the two-degrees scenario,” said Bakal.

But overall, those ambitions could prompt an even more widespread shift in generation portfolios, he predicted. Along with more coal retirements and renewables builds, Bakal suggested that closer alignment with the 1.5-degree-C scenario could mean the role of natural gas will need to be fairly limited. “All of that has the potential to strand investments—coal investments, and natural gas investments.”

Ceres this August released an updated climate scenario analysis framework that provides specific guidance for investors and companies to assess climate change-related risks and opportunities as it relates to the IPCC’s call to limit global warning to 1.5-degree-C. So far, the organization has received “a very positive response,” to the tool. “It’s important—especially for big power companies—to do scenario analysis and basically do a deep dive on the science so they understand it,” Bakal said. “Some companies just want to be told [what they need to do], but for electric power companies, it’s really important that they take a deep look at the science and the scenarios, and at the pathways, because there are just so many implications for them, especially when you get into electrification of other sectors,” he said.

“We think companies have found it quite illuminating if they take a thorough, open-minded approach to doing the scenario analysis,” he added. “And of course, there’s also the risk side of the equation, where they really have to look at physical risks—including the adaption issues, and the safety and resilience issues related to climate change.”