One of the world’s first osmotic power plants started operation at Tofte on the Oslo fjord in Norway last November, producing 2 kW to 4 kW after more than a decade of collaborative research and development by the Norwegian University of Science and Technology and Norwegian state-owned utility Statkraft (Figure 1). 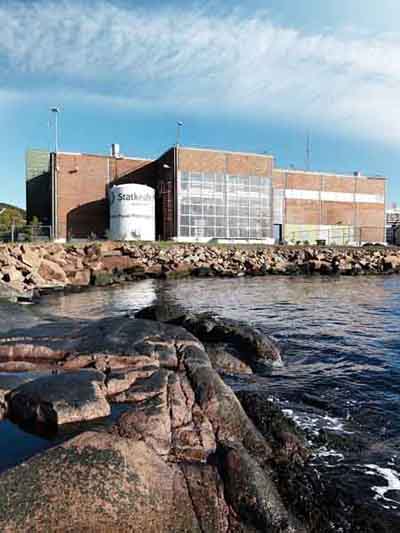 1.     Osmotic power. Norway’s state-owned utility last November started operation of one of the world’s first power plants to produce 2 kW to 4 kW by exploiting the salinity gradient—or salt differential—between seawater and freshwater. Still in the prototype phase, the plant at Tofte on the Oslo fjord will eventually be expanded to a 1-MW to 2-MW pilot facility. If viable, project results will be used to develop a commercial osmotic power facility by 2015. Courtesy: Statkraft

The plant operates on a process called pressure-retarded osmosis (PRO) (Figure 2), which basically involves pumping seawater at 60% to 85% of the osmotic pressure against one side of semipermeable membranes whose other side is exposed to freshwater. When freshwater, compelled by osmosis, flows across the membranes, it dilutes the saltwater and increases its volume — and consequently, the pressure within the saltwater chamber. A generator-driving turbine is spun as the pressure is compensated. (For details of the PRO process see "Osmotic power from the ocean" in POWER, November/December 2006.) PRO can be thought of as the reverse osmosis process (used for desalination and water treatment) running backward and producing power from the flow of freshwater. 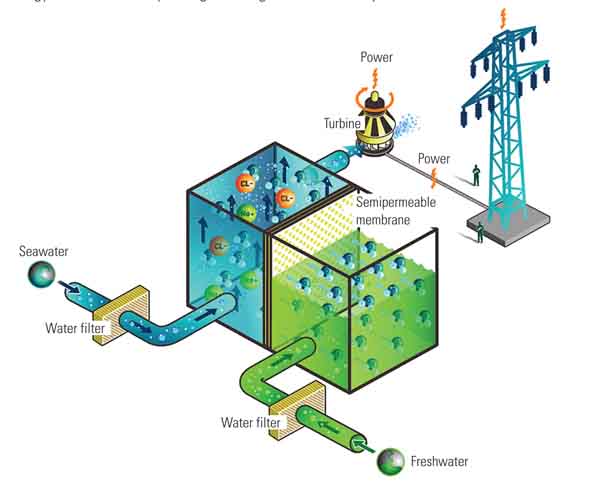 2.     A dose of salts. At Statkraft’s recently opened osmotic power plant, freshwater and salt water are guided into separate chambers, divided by an artificial membrane. The salt molecules in seawater pull the freshwater through the membrane, increasing the pressure on the seawater side. The pressure equals a 120-meter water column, or a significant waterfall. That energy is used to turn a power-generating turbine. Courtesy: Statkraft

Statkraft expects its prototype to play a significant role in the testing and development of osmotic power during its three-year operational run. The next phase will be to build a 1-MW to 2-MW pilot facility. The utility’s ultimate goal is to build a commercial osmotic power plant by 2015, a facility that will harvest a fraction of the 1,600-TWh to 1,700-TWh annual global osmotic power potential.

But first Statkraft must improve the efficiency of the membrane from around 1 watt per square meter (1 W/m2) to some 5 watts, which would make osmotic power costs comparable to those of other renewable sources. Researchers must also find a way to transfer pressure to the turbine without using too much of the energy in the system, the utility says.

Then there’s size to consider. The Tofte prototype consists of about 2,000 m2 of membrane, 66 pressure pipes, a cleaning unit, pressure exchangers, and a turbine. A full-size 25-MW osmotic power plant would require 5 million m2 of membrane. That would require a plant the size of a soccer stadium. The operational scale of such a plant is stunning: To achieve an output of 1 MW, 1 cubic meter (m3) of freshwater per second must be mixed with 2 m3 of seawater at 12 bar. This means that a typical 25-MW plant would need 25 m3 of freshwater and 50 m3 of seawater per second.

According to Statkraft, this is still achievable because the technology is based on modules, and the power plant can be scaled up or down according to available resources.