Is management a science? An enormous intellectual construct developed over the past century—by business schools, consultancies, and major staff components of business firms and government agencies—is dedicated to that proposition. My 40 years as a government management trainee, a middle manger, an executive, a successful business owner, a long-time observer of managers at all levels, and a reader of the literature of “management science” leads me to answer emphatically, “No.” My experience is that management science is an oxymoron, on the level of “military music,” “senate intelligence,” and “congressional ethics.”

The logical implication of my rejection of management as a science is that management consultants, who peddle management science are seldom valuable, frequently worthless, and often destructive. I embrace that logic and have seen it in practice.

I love the headline on a recent The Economist column: “The Three Habits … of Highly Irritating Management Gurus.” For a moment of pause, recall that imprisoned Enron executive Jeff Skilling was once a McKinsey & Co. consulting heavy hitter, advising a then-modest-but-successful natural gas pipeline company that became the shamed House of Enron. Given what he saw as a consultant, Skilling became an Enron executive and proceeded to wreck the business.

The self-proclaimed management gurus mostly focus on irrelevant numbers, imprecise measurements, and flawed visions, employing the prestidigitation of PowerPoint. (For the best critique of PowerPoint, check out Edward Tufte’s The Cognitive Style of PowerPoint: Pitching Out Corrupts Within.) It’s all a fraud. The ubiquitous faux jargon—“customer-centric, shareholder-driven, synergistic, win-win-win”—is all junk.

So I was delighted with philosophy doctorate and former disgruntled (for very good reasons) management consultant Matthew Stewart’s new book, The Management Myth: Why the Experts Keep Getting It Wrong (Norton, Aug. 2009). Stewart’s book (also available from Amazon.com in Kindle format) intersperses his personal history with stories of the often fraudulent, highly entertaining, and mostly bogus practices of management consultants over the past century. Stewart provides a biting and often hilarious intellectual critique of the unscientific underpinnings of the lucrative practice of management science. 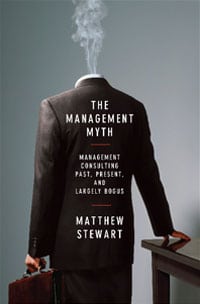 As Stewart argues persuasively, management is an art and a craft, better examined as part of the liberal arts than as an allegedly scientific discipline. Today’s management consultants, in his experience and mine, often are the equivalent of 19th-century traveling medicine men (no women need apply) and evangelical Christian snake handlers. They attract their followers without regard to quantifiable results or rigorous and repeatable inquiry, but in response to artistic presentation, psychological babble, and plausible (not replicable) results.

If your company is employing or thinking of employing management consultants, this book is must reading. Look out: The trade is mostly about blue smoke and management-mirror mythologies. The practice rests on unproven theories with no predictive value and alleged science that relies on unfalsifiable hypotheses without scientific controls, dressed up in a lot of sales razzamatazz. In short, argues Stewart from his experience, management consultants are—as two writers for the Economist defined them a few years ago—“witch doctors.”

Britain’s Lancaster University Management School offers a conventional definition of the alleged discipline: “Management Science is concerned with developing and applying models and concepts that may prove useful in helping to illuminate management issues and solve managerial problems. The models used can often be represented mathematically, but sometimes computer-based, visual or verbal representations are used as well or instead.”

Note the conditional and passive-voice constructions: “may prove useful” and “can often be represented mathematically.” This is classic academic fudge-speak, characteristic of the purported discipline while betraying its fundamental weaknesses. To abuse a useful cliché, there is no there there. Or, to resurrect a Wendy’s hamburger chain slogan from the mid-1980s, “Where’s the beef?”

Most management science has no rigor. Translated, that Lancaster University definition says management science may not be useful, the math is doubtful, and the models are dodgy. Not something upon which I’d bet the company. Many firms do, often to their profound dismay.

Worthwhile publications such as Management Science and the Journal of Management Studies claim to plumb the scientific depths of the subject, including computer modeling and arcane approaches to management. Interesting and worth reading? Yes. Worthy of guiding real-life management behavior? Golly, I hope not.

In the early 20th century, industrial engineer Frederick Winslow “Speedy” Taylor, the master of the shop floor stopwatch, spawned the notion that there is a science of management. He created the new, largely destructive business known as management consulting. It was also known as “Taylorism.” Like many management consultants that I know, and I know plenty, Taylor was a cynical mercenary brought into organizations to execute the designs of the executives who hired him to cut costs, not to advance the aims of the organization or society. As one of my management consultant friends told me, explaining his job, “We eat what we kill.”

Jill Lepore in The New Yorker, reviewing Stewart’s book, noted that as an author and management consultant, Taylor engaged in “fudging, lying, and inflating.” Those are, Lepore observed, and I concur, “The profession’s stock-in-trade.”

Stewart knows whereof he writes. He spent several years after earning a doctorate in philosophy (epistemology) at Oxford peddling Excel witchcraft and PowerPoint poison to clueless business clients, for big bucks. He ate and drank very well, with McKinsey and Co. (which bred Skilling) and, later, in his own, unnamed, firm.

My experience in government and the private sector is that many managers, particularly at the highest levels, don’t fully understand what they are doing. They often feel helpless. They are, to use another useful cliché, flying by the seat of their business pants. So they read management books by short-order cooks—Tom Peters, Steven Covey, and the like—and contract with hands-on business chefs to try to boil their leaden and incoherent management practices into gourmet gold. Such managerial alchemy seldom works. The managers don’t get it. Often they are the problem, not the solution.

Management involves organizing work and work flow, arranging for and staging the resources necessary to the tasks, and persuading the people needed to get the job done to perform at their best. The last task is the hardest. The earlier components are somewhat susceptible to measurement and engineering. They are the least important.

The key to successful management seems to me to be getting people to work together for a common business goal. It’s not easy. It’s not readily measurable. Productivity per person is a useful gross measurement, but it’s not much help at the job site. Many exogenous and unmeasurable factors impact productivity, including the quality of the management itself.

The management guru list-makers are the most pernicious observers of the management environment. Covey’s “seven habits” is an exercise in vacuity. I like to call it “The Habits of Seven Successful Executives.” A newspaper cartoon not too long ago referred to “The Two Habits of the Easily Distracted.”

The Covey and Peters approach is anecdotal and uncritical, yet it passes for management wisdom. There is nothing about it that is remotely scientific. It’s not measurable, not repeatable, not rigorous. It’s oversimplified in the extreme. Covey and Peters rely on what the Economist correctly describes as “corporate hagiography.”

Covey touts the managerial success of GM’s Saturn division. That division is gone, along with GM’s Pontiac and Oldsmobile divisions. Good management, yes?

Peters praises General Electric. Under Jeff Immelt, GE has melted into a major underperformer. I’m glad I sold my GE stock years ago, when Jack Welch retired. If I were a GE director, I’d vote to fire Immelt immediately.

The Economist article summarized it nicely for me: “If management could indeed be reduced to a few simple principles, then we would have no need for management thinkers.”

It’s important to think, and think deeply, about management. But it’s folly to think that there are scientific ways, and simplified cookbooks and equations, to understand the art, the discipline—but not the science—of management. It’s far tougher than that.