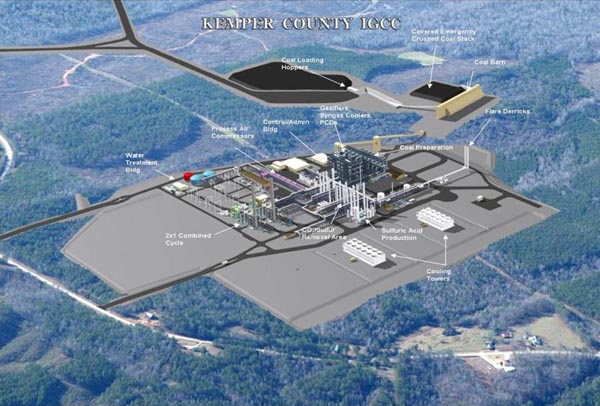 The plant in Kemper County is adjacent to a viable lignite reserve developed and mined by Liberty Fuels, a subsidiary of North American Coal Corp., which will provide feedstock for the IGCC plant.

The facility will produce electricity in an efficient and environmentally friendly manner with a syngas-only net output capability of 524 MW and with a peak net output capability of 582 MW, using syngas in the combustion turbine coupled with natural gas firing in the heat recovery steam generator (HRSG). The facility will produce marketable by-products of ammonia, sulfuric acid, and carbon dioxide (CO2). Approximately 65% of the CO2 will be captured and used for enhanced oil recovery (EOR), making the Kemper County facility’s carbon emissions comparable to those of a natural gas–fired combined cycle power plant. Commercial operation is scheduled for May 2014.

The TRIG technology, derived from fluidized catalytic cracking units used in the petrochemical industry, uses a pressurized, circulating fluidized bed unit. The transport gasification system features higher efficiencies and is capable of processing low-rank coals such as lignite. Commercial TRIG units can be designed to achieve high environmental standards for SO2, NOx, dust emissions, mercury, and CO2. Cost analysis based on extensive design has shown that the economic benefits offered by the air-blown transport gasifier relative to other systems are preserved even when CO2 capture and sequestration are incorporated into the design.

The largest transport gasifier built to date commenced operation in 1996 at Southern Co.’s Power System Development Facility near Wilsonville, Ala. The gasifier and auxiliary equipment at the PSDF were sized to provide reliable data for confident scale-up to commercial scale. The demonstration unit has proven easy to operate and control, achieving more than 15,600 hours of gasification. The demonstration-scale gasifier has successfully gasified high-moisture lignite from the Red Hills Mine in Mississippi in four separate test campaigns for more than 2,300 hours of operation. On lignite, the transport gasifier operated smoothly over a range of conditions, confirming the gasifier design for Kemper County.

The Kemper County IGCC facility is located on a 2,968-acre greenfield site. A block flow diagram of the overall process is shown in Figure 2.

There are two separate gasification trains. Each train supplies syngas to a single combustion turbine and HRSG. Each gasification train has three parallel coal-drying and -milling units, and each of these units feeds two high-pressure (HP) coal feed systems. There are two process air compressors per gasification train. About 60% of the process air is supplied by the process air compressors, with the remainder extracted from the combustion turbine located in the power island. Six proprietary pressure decoupled advanced coal (PDAC) feeders developed at the PSDF will supply each of the two gasifiers with raw lignite at a rate of 575 tons/hour. A proprietary continuous fine ash depressurization (CFAD) and a proprietary continuous coarse ash depressurization (CCAD) system cool and depressurize the ash for storing in a silo and for disposal.

Syngas from the gasifier is cooled in the primary syngas cooler to produce HP superheated steam, which is sent to the power island for power generation in the HP steam turbine. Syngas from the syngas coolers is routed to the particulate control device (PCD), where the fine ash is removed by CFAD. The particulate free sour syngas is scrubbed with water in the syngas scrubber to remove halogens and other contaminants and to saturate the syngas to facilitate shift reaction. The syngas leaving the scrubber undergoes water gas shift reaction, where about 90% of CO is converted to CO2. The plant is designed to match the natural gas equivalency for carbon emission.

The sour gas is scrubbed and shifted, and then passes through a COS hydrolysis reactor and is routed through the ammonia scrubber to remove ammonia, an acid gas removal (AGR) unit to remove sulfur and CO2, and a mercury removal bed before being sent to the gas turbine for power generation.

The AGR unit consists of UOP LLC’s SELEXOL Process. The H2S and CO2 absorbers in the AGR unit remove greater than 99% of the H2S and a portion of CO2 from syngas using SELEXOL, a physical solvent. The captured H2S is later stripped from the solvent using steam heat, producing a concentrated H2S stream, while the purified solvent is refrigerated and recycled to the absorption units. The concentrated H2S acid gas stream is routed to a sulfuric acid plant, where the sulfur is converted into commercial grade sulfuric acid using Haldor Topsøe’s WSA Process. The removed CO2 stream is dehydrated and compressed and sold as a by-product for EOR, resulting in its geologic storage. The sour water from syngas scrubber is stripped in three columns to remove H2S, CO2 that is sent back to the AGR unit, and a salable ammonia product. The stripped water is used for CWT  makeup.

Benefits of the KBR Transport Gasifier

The TRIG gasifier offers a simpler, more robust method for generating energy from coal than other available alternatives. It is unique among coal gasification technologies in that it is cost-effective when handling low-rank coal, as well as coals with high moisture or high ash content. There are many other important characteristic of TRIG, such as: 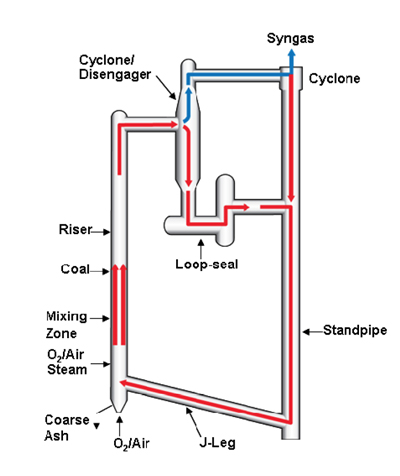 The detailed engineering work is being executed by both KBR and Southern Company Services (SCS) with procurement and construction management by SCS for this TRIG technology project. In addition to the engineering effort associated with the scale-up to commercial scale, some of the other areas worth noting in the engineering design and execution are discussed below.

System Integration. There is a high level of heat integration between gasification, gas cleanup, and power generation. This required a high degree of system integration, including the plant controls.

One of the goals during the process design phase was to maximize overall plant efficiency with carbon capture. Multiple options for heat integration between gasification, gas cleanup, and power generation were evaluated. This enabled the process to meet a projected plant heat rate of 11,708 Btu/kWh while using coal with an average of 45% moisture and achieving over 65% CO2 removal. Steam is a product from the gasifier island, and therefore a high level of heat integration helped to lower the overall plant station service.

Gasifier and Support System Design. The gasifier was designed to contain high-temperature-burning coal while operating. Other design features include these:

Coal Handling and Feeding. Several unique design features of the coal handling and feed systems include:

The fluid bed drying system used on the Kemper County IGCC Project is used in a large variety of industries for drying solids, but it has not been commonly used in conventional coal plants. A high level of heat integration is incorporated in the design in order to recover heat from the process for use in the coal-drying system. This minimizes the use of steam for drying the coal.

One engineering focus in the coal-handling area is feeding the finely ground coal particles into a gasifier that is operating at over 620 psia. PDAC, a new technology to control coal flow into the gasifier developed at the PSDF, will be used on this project. By controlling the pressure differential between the feed hopper and the gasifier, the coal solids feed rate can be accurately controlled.

Continuous Ash Withdrawal. A unique requirement of the TRIG ash withdrawal system is the need to depressurize and cool the ash. The ash can then be pneumatically conveyed as required.

The large ash particles from the coal accumulate in the gasifier and need to be removed to maintain solids inventory in the circulating loop, and the smaller particles captured in the PCD also need to be removed from the system. In addition, the ash has to be cooled from ~1,800F to 350F. To address the issue of ash withdrawal and cooling, the CCAD and CFAD proprietary systems were developed at PSDF. The systems work by using the pressure in the syngas to push the ash out of the bottom of the gasifier or the PCD.

The Kemper County IGCC Project is designed to capture approximately 65% of the carbon in the coal as CO2. This level of capture puts the plant emissions on par with natural gas–fired combined cycle power plants. Other features include:

Ammonia Recovery System. The Kemper process is set up to recover anhydrous quality ammonia from sour water. Ammonia is stored in the ammonia storage tank, where it can be used locally in the selective catalytic reduction system or trucked to other locations. However, if the ammonia storage tank fills up, and there is no transportation available to empty it, anhydrous ammonia can be recycled back to the gasifier. In this operating scenario, ammonia will ultimately dissociate to N2 and H2 in the gasifier due to the high reducing temperature. 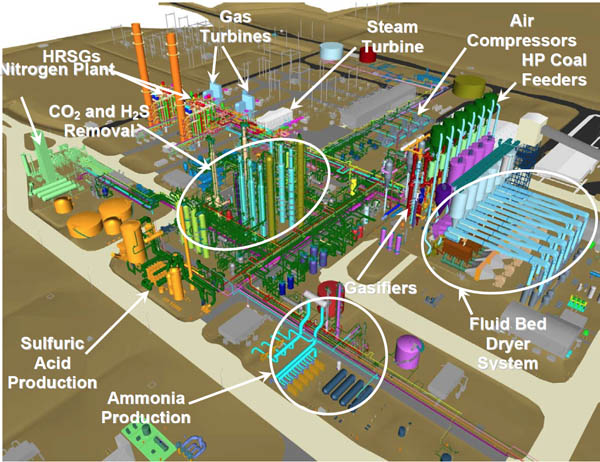 The Kemper County project is one of the first commercial TRIG projects. Given the success of the development unit at the PSDF, and the inherent efficiency of the TRIG gasifier, the technology is expected to fill a valuable niche in power generation from low-rank coals.

The Kemper County IGCC facility, with its robust gas cleanup system and ability to handle the large variability of the local lignite, will be one of the cleanest coal facilities in the world. With extremely low sulfur and NOx emissions, and a carbon footprint similar to that of natural gas, Kemper’s success is expected to become a benchmark for future coal power plants.