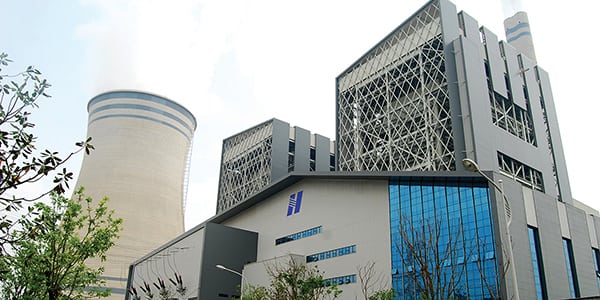 China’s current economic development has been marred by complex water resource constraints—both of quantity and quality—that span a number of geographical, political, economic, and social factors.

Large areas of northern China, including parts of Handong, Henan, Hebei, Shanxi, Inner Mongolia, Liaoning, Xinjiang, and Shaanxi, are extremely water-stressed, yet these are the same regions where the country’s coal power boom is happening. According to the Platts World Electric Power Plant Database and the World Resources Institute’s Aqueduct water risk analysis model, power plants located in those “red-list” areas had an annual water consumption of 3.4 billion cubic meters (m3), with an estimated water withdrawal of 29 billion m3.

Meanwhile, the data suggest that 48% of proposed coal-fired power plants in the country—237 GW worth—are slated for construction in water “over-withdrawal” areas and could consume an additional 1.8 billion m3 of water per year, withdrawing 6.5 billion m3 annually. That’s equivalent to the basic annual needs of about 100 million people. If business proceeds as usual, the country will see 25% of its freshwater use go to power plants by 2030, Bloomberg New Energy Finance projected in 2013. However, water scarcity and water quality challenges have already left China’s five biggest state-owned power generators heavily exposed to water supply disruptions. 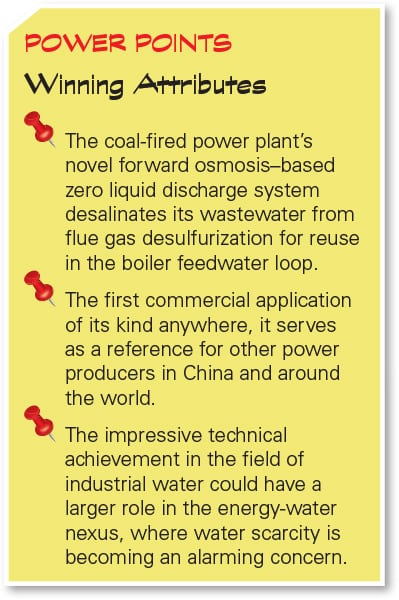 A First-of-its-Kind Project Takes Shape Amid the Chaos

Recognizing the risks that water scarcity and quality poses to its energy future—and faced with a predicament of also ensuring food security—China’s government has clamped down hard.

In 2012, as part of its 12th Five-Year Plan, Beijing adopted new industrial water rules (detailed in the State Council document No. [2012]3) that applied the strictest limits ever to water intake and discharge. During that period, it also enacted legislation to curb emissions of nitrogen oxides, sulfur dioxide, particulates, and mercury from coal-fired power plants, essentially mandating electrostatic precipitators and flue gas desulfurization (FGD) technology be installed across its massive fleet.

China Huaneng Group says it is driven to enhance profitability, but it also holds industry-leading competitiveness and sustainability as key values and is devoted to providing a “strong guarantee” for economic and social development in China.

Huaneng is no stranger to quick development or new technology. The company’s installed capacity base has grown exponentially since it was founded in 1985, swelling from a meager 113.2 MW to 100 GW at the end of 2009, 150 GW by the end of 2014, and a stunning 160 GW by the end of 2015. Today, the company, the first in China to join the ranks of Fortune 500 companies, has assets scattered all over China and abroad, and it has expanded its operations to encompass power plant development, investment, construction, operation, and management as well as finance and technology research and development.

With China’s new air pollution and water intake/outflow requirements under consideration, for its Changxing units, Huaneng opted to source water for cooling and other purposes from the nearby Lake Taihu. But, in a departure from its more conventional projects, the company also committed to install a new wastewater treatment plant to treat a combined waste stream, including the FGD blowdown wastewater stream and cooling water blowdown—and to make it a zero liquid discharge (ZLD) system, with recovered water being recycled in the boiler feedwater loop.

In a world first, the system was also designed to use forward osmosis (FO) technology as the brine concentration technology for the ZLD train.

According to Oasys, the guiding philosophy in designing the ZLD process flow for Changxing was for the pretreatment and MBC sections of the system to be able to absorb the “wide swings” in wastewater flow and water quality arising from variations in the FGD scrubber process. “Because the wastewater treatment plant was built with the new facility and not a retrofit, the ZLD process flow was designed based on projected water quality data. Ability to treat a variety of waters across a wide range of hardness, alkalinity, and total dissolved solids [TDS] was therefore planned for in the design of the system,” a company spokesman said.

The company also said that several important design decisions were made to optimize the system for stable performance over the expected wide range of water quality and flow conditions. They included:

■ Complete softening of the FGD wastewater was required due to the high concentration factor required for ZLD, in order to minimize opportunities for scaling in the pre-concentrating RO system and for premature saturation of minerals in the crystallizer. Stoichiometric softening in a contact clarifier was combined with weak acid cation ion exchange polishing.

■ MBC process flexibility was maximized so that the wide range of feed flow and water quality could be managed. To accomplish this, the team defined four design cases for flow and incoming TDS. The RO and FO components of the MBC were then designed to produce stable brine TDS, allowing flow and overall recovery to float as necessary.

■ To maximize turndown ratio, the FO component of the MBC was split into three parallel trains (Figure 1), a configuration that allows operation of the MBC at flows from 60% to 110% of design maximum.

One, two, or three trains may be in service at one time. “The cross-flow nature of the Oasys Water FO system aids in the wide range of operating flow within each train and also is critical to the system reaching the target recovery levels,” the company said. According to Oasys Water, the FO MBC concentrates wastewater dissolved solids from approximately 60,000 milligrams per liter (mg/l) in the RO concentrate to 220,000 mg/l or higher. “The MBC does the brine concentration work of a thermal or mechanical evaporator with the simplicity and modularity of a membrane system, while consuming a fraction of the energy,” it explained.

To reconcentrate the draw solution, it must be heated to between 45C and 65C above the inlet dilute draw solution temperature to volatilize and subsequently recondense and absorb ammonia and carbon dioxide.

For the Changxing system, the energy requirement is less than 90 kWth/m3 of wastewater processed, Oasys Water said. The draw solution recovery was designed to use steam as the energy source for volatilization and water cooling for condensation, but the company noted that mechanical vapor recompression system designs are also an option.

The freshwater stream exiting the MBC draw solution recovery loop combines with the pretreated wastewater stream and passes through the RO system. It leaves the system in the second-pass RO permeate stream with TDS of less than 100 mg/l. It is then stored in the product water tank and is reused in the power plant’s boiler makeup water system. The MBC system is designed to recover up to 23 m3/hour—or up to 87% recovery—but it is actually performing at more than 90% in operation thus far, said Oasys Water.

Notably, the salt byproduct from the process is also collected and sold. Concentrated brine exiting the MBC system feeds a two-stage crystallizer at a target TDS concentration of 220,000 mg/l or higher. Currently, the crystallizer processes 2.5 m3/hour of brine, operates at pH 8.0–8.5, and concentrates the brine to saturation. A pusher centrifuge and hot air dryer system then remove remaining water to less than 0.5%. Finally, produced mixed salt crystals of more than 95% (NaCl + Na2SO4) are bagged and palletized for sale to chemical manufacturers in the region.

The Changxing Power Station Units 7 and 8 were new builds that came online in late 2014, which meant there was “no actual water analysis on which to base the design of the ZLD process train to treat FGD blowdown wastewater,” noted Oasys Water. “This fact guided the design team to conservatively design the pretreatment and the FO brine concentrator as described,” it said, noting that since startup, the flow per day to the plant has been in range of the design basis, but TDS levels have been lower than expected (see table). This has resulted in lower flow to the MBC system and overall higher recovery prior to the ZLD crystallizer.

Startup and commissioning of the new plant, and the first-of-its-kind water treatment technology, was also challenging, as could be expected. Notably, the Chinese and American team dealt with language barriers as it trained operators to run the system. Startup, commissioning, and training related to the project that is of much interest to developers of new power plants and coal-to-chemical projects in China were also complicated by frequent tours and visitors. But that interest ultimately paid off for Oasys and Chinese partner Beijing Woteer, which have since secured three additional projects in China. They include another coal power FGD wastewater project and two projects for ZLD treatment of streams at coal-to-chemical process complexes.

Today, the solution continues performing as expected to transform Changxing’s complex, high-salinity waste stream, which includes FGD blowdown wastewater and cooling tower blowdown. Oasys Water’s technology is now transforming 630 m3 per day of wastewater, reducing both the intake of local surface water and the outflow of industrial wastewater. The draw solution recovery, designed to use steam as the energy source, also continues to reduce overall energy requirements and overall costs.