Researchers at Germany’s Technische Universitaet Muenchen (TUM) claim to have developed a small-scale hydroelectric power plant that is capable of operating profitably even at modest dam heights while minimizing impact on waterways.

Typically, harnessing hydropower at relatively low dam heights meant that part of the water had to be guided past the dam by way of a so-called bay-type power plant, but that system has inherent disadvantages, the TMU researchers assert. One is that the large size of the plant, including concrete construction for the diversion and a power house, would involve high construction costs and would be destructive to the riverside landscape. Another is that each plant would be a custom-designed, one-off project. Finally, most plants would need fish-passage facilities.

The small hydro plant developed as a model (Figure 6) by the team of researchers tackles all three issues. Only a small transformer station would be visible on the banks of the river, they claim. In place of a large power station building on the riverside, a shaft dug into the riverbed in front of the dam conceals most of the power generation system.

"The water flows into a box-shaped construction, drives the turbine, and is guided back into the river underneath the dam," they say. "This solution has become practical due to the fact that several manufacturers have developed generators that are capable of underwater operation—thereby dispensing with the need for a riverbank power house." By providing a gate in the dam above the power plant shaft, the researchers say two other issues were also resolved: fish protection and preventing undesirable vortex formation. 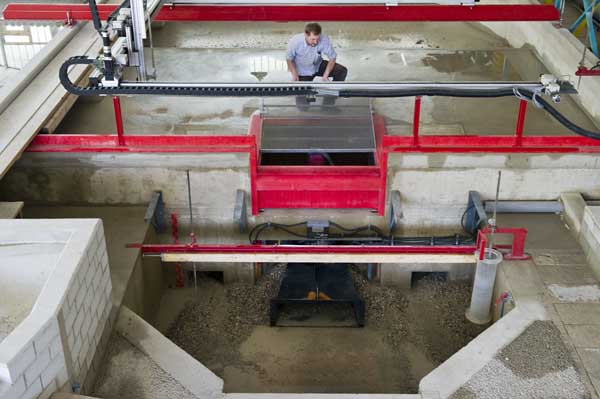 6. Testing the waters. Researchers at Germany’s Technische Universitaet Muenchen (TUM) say a small-scale hydroelectric power plant they have developed is capable of operating profitably even at modest dam heights while minimizing the impact on waterways. The design features a shaft dug into the riverbed in front of the dam that conceals most of the power generation system. The water flows into a box-shaped construction, driving the turbine, and is guided back into the river underneath the dam. A gate in the dam above the power plant shaft prevents undesirable vortex formation while protecting fish. Courtesy: TUM

The researchers, headed by Prof. Peter Rutschmann, say that the research on the so-called "shaft power plant" sought above all to optimize cost, even over efficiency. "Standardized pre-fabricated modules should make it possible to order a ‘power plant kit,’ just like ordering from a catalog," they say. "We assume that the costs are between 30 and 50 percent lower by comparison with a bay-type hydropower plant."

Among factors that would lower the cost are that the shaft plant requires a low "head" of water (1 or 2 meters), compared to the bay-type plant, which would require twice as much. "Series production could offer an additional advantage: In the case of wider bodies of water, several shafts could be dug next to each other—also at different points in time, as determined by demand and available financing," the researchers say.

The plant design is thought to be particularly useful in developing countries for the provision of distributed generation. For cases in which turbines are not financially feasible, "It would be possible to use a cheap submersible pump and run it in reverse—something that also works in our power plant," Rutschmann notes.