A diverse range of speakers reviewed the state of gas-fired generation at ELECTRIC POWER, but there was one constant: flexibility

Low gas prices and increasing demand for highly flexible power generation are driving innovation and expanded use of gas-fired power, according to numerous speakers in the gas turbine/combined cycle power plant track at ELECTRIC POWER.

The track began with presentations from representatives of Alstom, Mitsubishi, GE, and Siemens, who outlined upgrades to their workhorse gas turbine models. All stressed the importance of being able to respond to rapidly changing demand. The impact of greater renewable generation, and its varying and often unpredictable output, was a theme that many speakers returned to during the week.

Case study and best practices presentations on Wednesday and Thursday made clear that with gas-fired power growing in significance, efficient operation requires attention to detail. Flexibility is key: One-size-fits-all approaches are not allowed.

Colleen Layman, water treatment engineering manager at Bechtel, delivered a lively talk on plant chemistry. Chemistry programs for heat recovery steam generators (HRSGs) have their own demands and constraints distinct from those for water-tube boilers, largely because they operate at multiple pressures and temperatures. For example, while maintaining proper phosphate levels to prevent corrosion is important across all steam boilers, HRSGs have a particular problem with “phosphate hideout” (a condition under which phosphate concentrates in certain areas, causing inaccurate test readings and overfeed of phosphates) due to plant cycling. Phosphate hideout is known to be increased by the use of duct burners.

Layman cautioned that plant chemistry needs to be based on the highest system pressure, and that careful thought needs to be given to each plant’s unique characteristics and operating parameters. Different approaches can be taken for specific plants, but operators need to be aware of the consequences of their choices.

Because of phosphate hideout issues, plants that cycle frequently, and those that fast start, are better served by the use of all-volatile treatment rather than phosphate treatment, provided that high water quality can be maintained. Full flow condensate polishing is also recommended for such units.

Ben Frerichs, assistant mechanical engineer with Burns & McDonnell, described an ongoing repowering project at the Moselle Generating Plant, owned and operated by South Mississippi Electric Power Association. Two of the three existing gas-fired boilers are being replaced by a 1 x 1 arrangement of GE 7FA turbines and Vogt Power HRSGs, which will boost output from 60 MW to 150 MW. Much of the original steam cycle is being reused, including the steam turbines (which were refurbished), feed pumps, condensate pumps, condenser, and cooling towers. The new units should come online this year.

Prasad Koneru, project manager with KBR, gave an update on the Kemper County integrated gasification combined cycle (IGCC) plant in eastern Mississippi. The plant will be a 2 x 1 IGCC with 582 MW peak power and better than 65% CO2 capture, which will reduce its emissions to the level of a gas-fired plant. It will use TRIG (transport integrated gasifier) technology to create the syngas.

Brian Sinn, the director of projects for Siemens Energy, reported on the Lodi Energy Center in Lodi, Calif., a “fast-start” plant designed for optimum compatibility with the high level of renewable generation (primarily wind) in northern California. The Lodi facility will be a 296-MW 1 x 1 combined cycle plant. 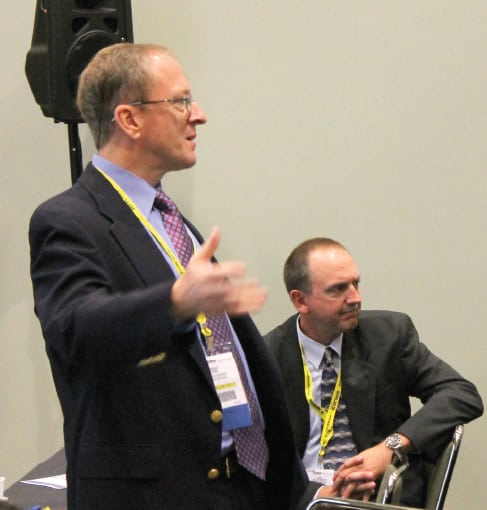 Jeff Blackwood, project manager at Duke Power, discussed the travails encountered while converting the Buck Steam Station in Rowan County, N.C., from coal to combined cycle gas. One piece of advice he offered was to remember that many steam cycle components are shipped with desiccant packs inside to reduce condensation during shipping. Unfortunately, one such pack was left inside an HRSG drum during construction, causing significant problems later with the plant chemistry.

Schuyler McElrath, consultant with JASC Controls, reviewed the challenges in firing a combined cycle plant on a mix of liquid and gas fuel. One problem with this approach is that when liquid fuels are inactive in a hot piping system, they can begin to solidify (coke), restricting flow and fouling fuel lines, valves, and combusters. One solution is to use water-cooled valves in areas where coking may occur.

Mark Fiztsimmons, partner with Steptoe & Johnson, presented a detailed review of the state of hydraulic fracturing (fracking) regulation and litigation. Though federal and state governments are rolling out an array of fracking regulations and a number of lawsuits are currently pending against gas developers for alleged harm from fracking operations, Fitzsimmons said, “the gas will continue to flow”—though it may be more expensive.