The Energy Information Administration (EIA) said in its March 8 Short-Term Energy Outlook that natural gas would supply the largest share of U.S. electricity in 2016, continuing its rise against coal.

In its most recent projections, the EIA predicts that trend will continue at least through 2016. Coal is expected to fall to 32% while natural gas will supply 33.4%. The slightly reduced share for gas will be made up by growth in renewable generation (Figure 1). 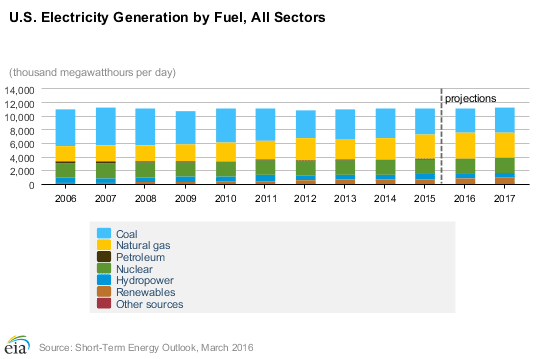 “This would be the first time that natural gas has generated more power than coal on an annual basis,” the EIA said.

Coal-fired plants have been challenged by sustained low gas prices, which have depressed power prices in competitive markets below levels at which the plants are economic to operate. That’s led a number of otherwise viable coal plants that survived the wave of retirements associated with the April 2015 deadline for the Mercury and Air Toxics Standards to be idled until power prices rise. One victim has been FirstEnergy’s three-unit, 2,500-MW Bruce Mansfield plant in Shippingport, Penn. Though a relatively modern plant—it came online between 1976 and 1980—Bruce Mansfield has been unable to sell its power into the PJM Interconnection for nearly a month because of low power prices.

Notably, the EIA figures are a revision of previous projections as recently as last month, which had coal maintaining its lead for 2016. EIA projections over the past few years have consistently under-predicted growth in gas-fired generation and production of natural gas. The EIA just last year predicted that gas would not overtake coal until 2030.

For 2017, EIA projects that gas prices will begin to increase due to growing demand, and gas and coal will fall back into a tie at 32.3%.

The EIA also predicts that average retail electricity prices will fall from 2015, which would be the first time this has happened since 2002. Demand growth is predicted to be nearly flat at 0.4%. Both prices and demand are predicted to rebound in 2017.