Coal has been the dominant source of electricity in the U.S. power mix for more than a century, but that may be coming to an end sooner than expected.

For July, gas supplied 35.0% of total U.S. generation against coal’s 34.9% share. Compared to July 2014, coal-fired generation fell in every region of the country, while gas rose in each. The largest drop in percentage terms came in the Mid-Atlantic region, where coal generation fell 3.6% compared to 2014. Gas’s share rose by the largest percentage in the Southeast, where it climbed 7.6% year-over-year (Figure 1). 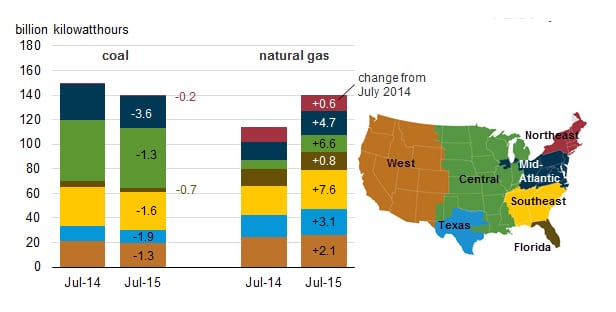 1. Big shift. Gas-fired generation made significant gains across all regions of the U.S. in July, while coal fell. Source: Energy Information Administration.

This comes only a few months after gas beat coal in April, when the U.S. generated 92.5 TWh from natural gas and 88.8 TWh from coal, the first time the nation has gotten the largest share of its power from anything other than coal. That represents a market share of about 31.5% against 30.2% for coal.

Gas had previously only come close to beating coal in April 2012, when gas prices fell below $2/MMBtu. Gas prices have also remained stubbornly low this year, falling under $3/MMBtu after staging a short-lived rally in 2014.

Some of the dip in coal’s share is likely the result of the final compliance deadline for the Mercury and Air Toxics Standards in April 2015. The rule was struck down by the U.S. Supreme Court in June, but few if any of the coal plants that shut down to avoid compliance are likely to restart, in part because the Environmental Protection Agency is planning to issue a new version in 2016 after re-doing some of the rulemaking process as a result of the ruling.

Year-to-date, coal remains in the lead with 827.9 TWh versus 745.4 TWh for gas, a 34.5%-to-31.1% advantage in the power mix. Those numbers, however, represent a fairly substantial departure from the EIA’s reference case in the 2015 Annual Energy Outlook (AEO), released in April. There, the EIA predicted gas would reach a 31% share—in 2040. Likewise, coal is projected to gradually drop to 34%, but not until the same year.

This year, in fact, is looking more like the EIA’s High Oil & Gas Resource reference case in the AEO, where, it said, “When natural gas prices are lower than those in the Reference case, as in the High Oil and Gas Resource case, the coal share of total electricity generation drops below the natural gas share by 2020.”

Whether this trend continues remains to be seen, but the EIA has had to repeatedly revise its projected share for natural gas in the power mix upward in every AEO over the past decade. That trend shows little sign of abating.