Grappling with a historically low planning reserve margin of 7.4%, owing to a mass of coal plant closures, the Electric Reliability Council of Texas (ERCOT) is forecasting record electric use this summer and warns it could issue energy alerts at “various times.”

ERCOT said its March 5–released final Seasonal Assessment of Resource Adequacy (SARA) for the upcoming spring season (March to May) and its preliminary assessment for the summer season (June to September) suggest the independent system operator (ISO), which manages about 90% of Texas’s electric load, faces markedly tighter supply scenarios this summer.

“Prior to each season, we consider a range of potential risks to determine whether there will be sufficient capacity to meet the expected peak load forecast,” said ERCOT President and CEO Bill Magness in a statement on March 5. “In all of the scenarios studied, we identified a potential need to call an energy alert at various times this summer.”

When ERCOT declares an alert, it “can then take advantage of additional resources that are only available during scarcity conditions,” the grid operator noted. “These resources include demand response products, resources that are normally set aside to provide operating reserves (including contracted load reduction from some industrial facilities), additional generation or imports from neighboring regions and voluntary calls for conservation by consumers.”

The preliminary summer SARA report (a final version is to be released in May 2019) includes a 74,853 MW summer peak load forecast based on normal summer peak weather conditions for 2003–2017.

However, the ISO’s total resource capacity for the upcoming summer is expected to be 78,154 MW—though only about 64,952 MW will be from operational baseload thermal and hydropower capacity. For the rest, ERCOT will depend on switchable capacity (3,516 MW); capacity from private use networks (3,437 MW); non-synchronous ties capacity contributions (430 MW); and coastal and non-coastal wind, and solar capacity contributions (5,884 MW).

Compared to existing resources (as of December 2018), the majority of CDR-eligible planned resources in ERCOT are wind and solar. These resources have signed interconnection agreements, or have air permits and proof of adequate water supplies for generation. “Other planned” resources represent planned projects for which interconnection requests have been made but do not meet criteria in the CDR reports. Courtesy: ERCOT

According to the preliminary SARA report, ERCOT will also bank on planned additions of 162 MW of wind and 172 MW of solar. Since the last final SARA, ERCOT has retired two long-idled gas units at the 1958-built 280-MW S.R. Bertron power plant in Harris County. However the grid operator plans to also depend on two mothballed gas units—a total 118 MW—at the Spencer station in Denton County for seasonal resources to ensure summer reliability. Meanwhile, three coal units—two at the 840-MW J.T. Deely plant in Bexar County, and the 470-MW Gibbons Creek 1 in Grimes County—also remain mothballed. 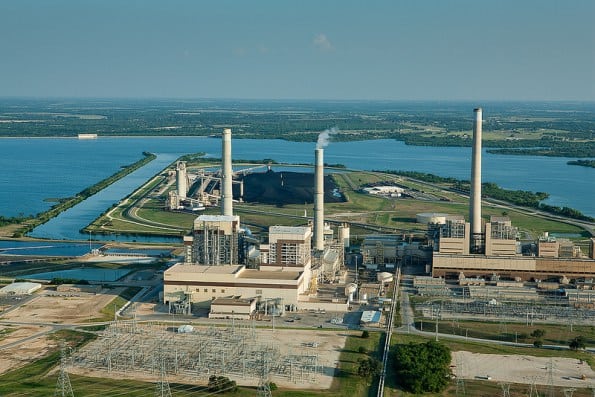 The Deely power plant near San Antonio was closed in 2018. The station’s two coal-fired units were among several in Texas being retired as utilities in the state transition away from fossil fuels. Courtesy: CPS Energy

While ERCOT has been preparing for tight operating reserves owing to a spate of recent plant retirements—including of major coal baseload generators—and delays in some planned resources, on Tuesday it said its current planning reserve margin is a historically low 7.4%. Meanwhile, it noted, electric demand in the ERCOT region continues to grow. Since 2016, ERCOT has set 16 new monthly peak demand records and new all-time system-wide peak demand records in 2016 and 2018, it said. 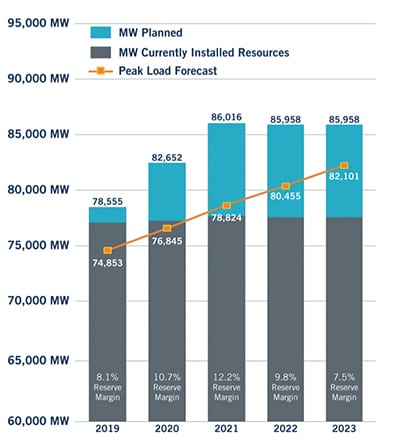 In its December 2018 Capacity, Demand, and Reserves (CDR) report, ERCOT forecast a 8.1% reserve margin for summer 2019, but market decisions to permanently mothball a 470-MW coal unit lowered the reserve margin to a historical low of 7.4% for summer 2019. “While there is no specific indication at this time that we will have to implement rotating outages, power reserves at this level increase the likelihood that extreme weather, forced outages, low wind output or spikes in demand could lead to emergency conditions,” Bill Magness, ERCOT president and CEO, told Texas lawmakers on Feb. 13. Courtesy: ERCOT

The preliminary SARA outlines five potential risk scenarios the grid operator could face this summer. The first is modeled on extreme weather conditions based on a long heat wave and devastating drought during the summer of 2011, an event that forced the grid operator to cut power to large industrial users to avoid rolling blackouts. An extreme summer forecast could boost summer demand to 78,156 MW (2 GW more than ERCOT’s final SARA forecast for summer 2018)—outstripping available supply resources.

The SARA also considers about 381 MW of typical maintenance outages, as well as forced outages of 3,845 MW, both based on data from June through September over the past three years. Other risks include low wind output, which would require securing about 3,959 MW in an extreme scenario.

As ERCOT explained, the SARA focuses on the availability of sufficient operating reserves to avoid emergency actions such as deployment of voluntary load reduction resources. “It uses an operating reserve threshold of 2,300 MW to indicate the risk that an Energy Emergency Alert Level 1 (EEA1) may be triggered during the time of the forecasted seasonal peak load,” it said. “This threshold level is intended to be roughly analogous to the 2,300 MW Physical Responsive Capability (PRC) threshold for EEA1. However, PRC is a real-time capability measure for Resources that can quickly respond to system disturbances. In contrast, the SARA operating reserve reflects additional capability assumed to be available before energy emergency procedures are initiated, such as from Resources qualified to provide non-spinning reserves.”

However, ERCOT also stressed that the amount of operating reserves available could also increase, depending on market conditions. Generators could respond well to soaring wholesale market prices amid capacity scarcity conditions, it noted. “Given these considerations, ERCOT believes that the 2,300 MW reserve capacity threshold is a reasonable indicator for the risk of Energy Emergency Alerts given the uncertainties in predicting system conditions months in advance.” 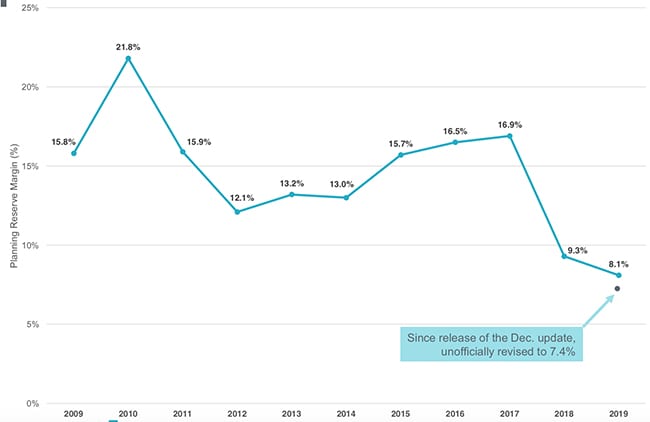 A Boon for Competitive Generators

The news could be a blessing for power generators in ERCOT, which have struggled to remain profitable amid high market volatility. Barely two years ago, low wholesale power prices in the region forced major baseload generators to assess future operations and prompted a swathe of retirements.

According to the Texas Competitive Power Advocates (TCPA)—which includes a group of generators that collectively produce about 60% of Texas’s power—members like Calpine and NRG Energy have been readying plants to prepare for the upcoming summer. As Executive Director Michele Gregg told the Houston Chronicle in February, the group’s members have decided to continue operating plants that had previously been under consideration for retirement, and are reviewing new projects. The group has urged the Texas Public Utilities Commission (PUC) to back price adjustments that could incentivize generators to build new power plants or make repairs to old ones.

Gregg told POWER on Tuesday that the preliminary SARA is consistent with ERCOT’s December-released Capacity, Demand, and Reserves (CDR) report in terms of forecast and resources. “The SARA highlights that wind will be an issue this summer and underscores the importance of recent PUC actions to better align scarcity pricing with the reliability risk inherent in our reliance on intermittent resources like wind,” she said. “Our energy-only market relies on accurate scarcity pricing to encourage new generation investment, and the SARA demonstrates the ever-increasing need for reliable dispatchable resources in ERCOT to continue meeting Texans’ demand for electricity.”

NRG Energy, a TCPA member that owns nine plants—a total capacity of just over 11 GW—in ERCOT, told POWER on Tuesday it also been watching ERCOT closely for changes that could have a favorable impact on forward prices, and which could ultimately help justify long-term investments needed to increase reliability of the system over the long term. On Feb. 28, NRG’s president and CEO, Mauricio Gutierrez, noted in a fourth-quarter 2018 earnings call ERCOT’s dwindling reserve margin has increasingly become dependent on new builds, particularly from wind and solar.

“For example, in 2020, ERCOT projects a 10% reserve margin, 3.5% coming from existing resources and the rest coming from new wind and solar. Just to be clear, this is equivalent to nearly 14 GW of new renewable capacity that needs to come online in the next 16 months. Any deviation from that will take us back to single-digit reserve margin.” That dynamic, Gutierrez said, has led to much higher wholesale prices in the near term. “But in the medium- to long-term, prices are still lagging and remain below new build economics, making it difficult for developers to justify 20- or 30-year investments. Both the [PUC] and ERCOT are aware of this situation and have taken steps to improve the energy-only market to better reflect scarcity conditions in the system,” he said. 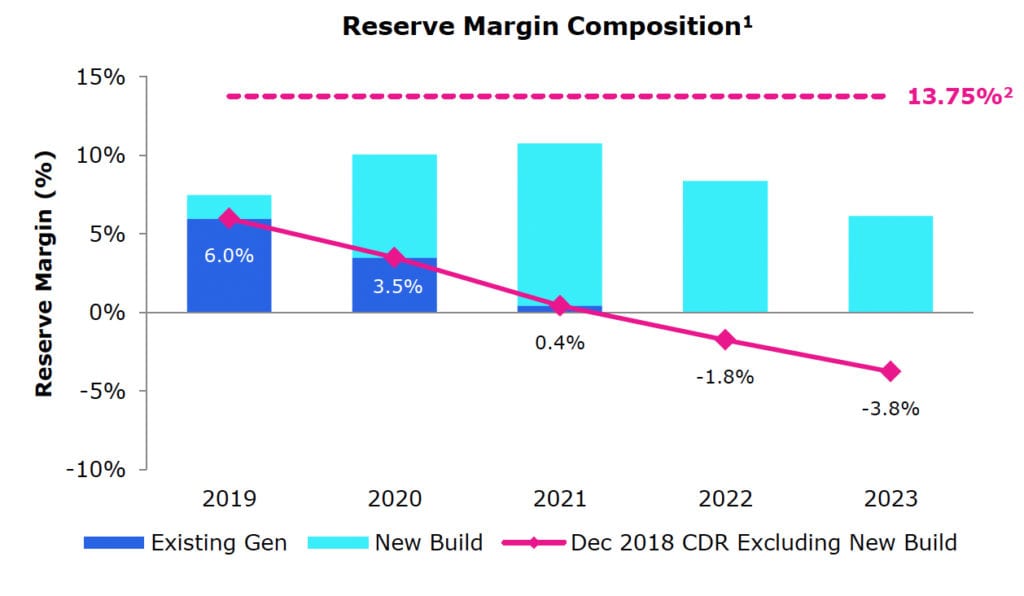 NRG, which last year announced it would accelerate a transition from a pure independent power producer model to a more simplified customer-driven integrated power model that favors its retail business to remain competitive in power markets, is also counting on internal hedges against its price retail load. That involves educating residential and business customers to manage higher energy bills.

“Specifically, we have been successful in expanding our demand response capabilities to help them manage load during peak conditions,” Gutierrez said. Meanwhile, the company has also been working to enhance its readiness programs. During the spring outage season, it has boosted maintenance and operations at its power plants to “ensure … units can withstand increased run time, given the expectation of high prices,” he added. “We also purchased outage insurance and plan to maintain generation length to further protect the platform from real-time price volatility on planned outages and higher retail loads.”

But NRG is also looking out over the long term, taking into account higher volatility in the Texas market. Gutierrez said the prospect “creates an opportunity to acquire customers at value. And given our scalable customer acquisition engine and our track record of integrating new businesses, we will be in the lookout for these opportunities in order to grow our business and increase market share. And as our retail business grows, our generation or supply business must grow with it. We have an opportunity to complement our physical assets with short-to-medium-term contracts or [power purchase agreements] that better align with our load obligations. This strategy allows us to better serve our customers, improves our position management and it is capital-light.”

In a statement on Tuesday, the PUC said it would continue to “closely monitor the forecast for the supply of and demand for electricity for the coming summer.” The commission also noted, however: “While the anticipated operating reserves for this summer will be even tighter than experienced last year, it is important to note that ERCOT has a number of mechanisms and tools to maintain system reliability. One such tool is a program that compensates customers willing to temporarily reduce their demand during emergency situations.”

The PUC added that it has been working with ERCOT to prepare for the summer. Measures include coordinating with the Railroad Commission of Texas to ensure gas-fired power plants have the natural gas supplies they need. The agencies on Feb. 27, for example, issued a notice to natural gas pipeline operators, generators, and electric utilities, urging them to finalize their coordinated preparations for the summer and maintain clear lines of communication as the summer progresses. “The PUC remains dedicated to ensuring that market rules support the investment needed for our growing state and vibrant economy,” it said.