In late January, a 1.5-MW concentrating solar power (CSP) plant began providing power to Salt River Project customers in Greater Phoenix, Ariz. Though small, the plant, developed by Tessera Solar and Stirling Energy Systems (SES), is seen as a prelude to 1,500-MW projects that are due to break ground in California and Texas later this year.

The Maricopa Solar power plant (Figure 6) is the first commercial project for the SunCatcher CSP technology designed and manufactured by SES. The facility uses 60 SunCatcher Stirling dishes. Each 25-kW SunCatcher consists of a 38-foot mirrored parabolic dish combined with an automatic tracking system to collect and focus the sun’s energy onto a Stirling engine to convert the solar thermal energy into electricity. 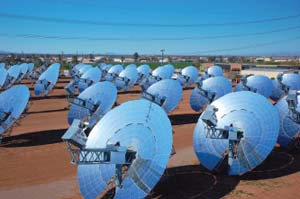 SES says that SunCatcher has a number of advantages, including the highest solar-to-grid electric efficiency, zero water use for power production, a modular and scalable design, low capital cost, and minimal land disturbance.

The technology was designed and developed in the U.S. through a public-private partnership with the Department of Energy. The SunCatchers used at Maricopa Solar were manufactured and assembled in North America, mostly in Michigan by automotive suppliers.