Big or small? Centralized or distributed? The answer, at least for energy storage, may be both, but what that future may be is unclear, if early discussions at the Energy Storage North America (ESNA) conference in San Diego October 4–6 are anything to go by.

Speaking on the first night’s opening keynote panel, Colin Cushnie, vice president of energy procurement and management for Southern California Edison (SCE), spent some time discussing the utility’s big dive into energy storage in 2014 when it signed contracts for 260 MW of capacity.

California’s storage mandate was part of the equation, but most of it was economics. “This was the first time we went out to the market looking at all the options,” he said, and when SCE weighed the various bids against its needs and projections “energy storage performed very well.”

The biggest slice of the procurement was a 100-MW project submitted by AES Energy Storage. It remains the biggest battery storage project that has been formally slated for development, though it won’t come online until 2020.

Cushnie also discussed another groundbreaking utility-scale initiative SCE is working on with Current by General Electric (GE). Announced the first day of ESNA, the project makes good on a promise GE made at ESNA in 2015, pairing gas turbine peaker plants with battery storage.

The new product, which GE is calling the LM6000 Hybrid EGT, will combine two existing LM6000 turbines with 10-MW battery systems and additional hardware and software upgrades that will allow the two systems to work together (Figure 1). The projects, which GE says which will qualify for the California Independent System Operator tariff for contingency reserve, “answers a critical need for Southern California, where regulations on natural gas usage and storage are changing in the wake of the state’s Aliso Canyon energy crisis earlier this year,” according to a statement accompanying the announcement. 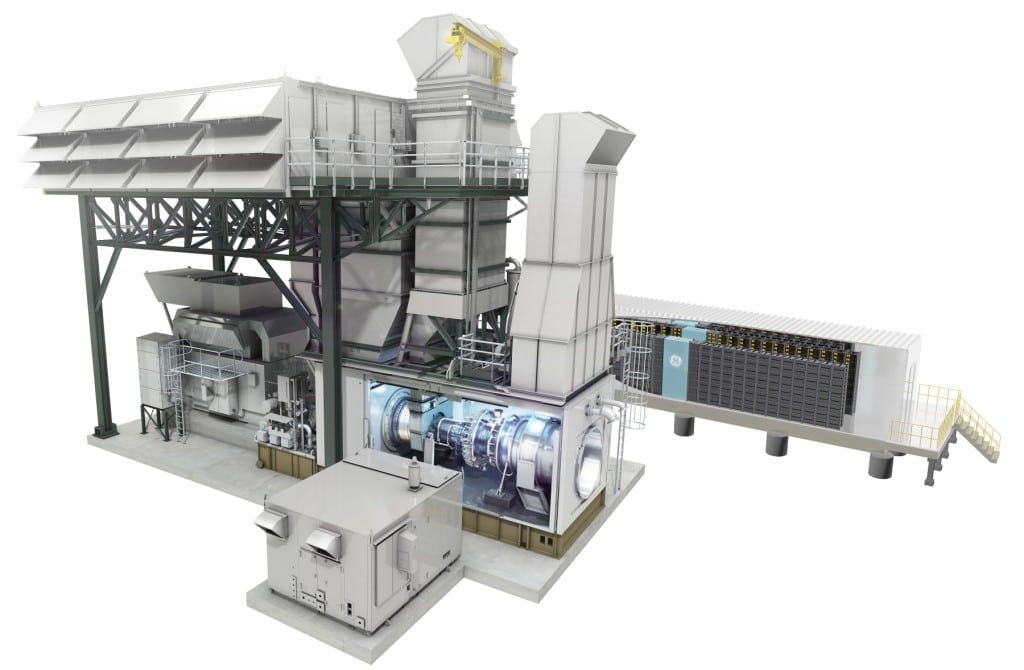 A Mix of Roles

Jennifer Didlo, market business leader for AES United States, who spoke on the same panel, also discussed SCE’s storage buy, but noted that storage still faces uncertainties about its role in the grid—precisely because it can do so much.

“It makes it more challenging to identify what the value propositions are,” she said. “How do you value a Swiss Army knife?”

Not everyone at ESNA was thinking big. In fact, those sometimes-conflicting value propositions are the reason storage needs to think small, said Garrett Fitzgerald, senior associate with the Rocky Mountain Institute.

Fitzgerald noted that “stacking” value propositions is what makes storage economic, because many of its functions operate for only short periods of time. Worse, some of the important functions—such as greater solar photovoltaic (PV) self-consumption and avoidance of demand charges—only operate at the customer level.

“The further downstream energy storage is deployed, the more services it can provide,” he said.

Fitzgerald also pointed out that distributed storage will be especially important as electric vehicle (EV) adoption grows because of the potential impact on peak demand if this growth is uncontrolled. He cited a study suggesting that unmanaged EV growth could potentially add 11% to peak demand in California.

A view of what that future might look like can be found at the University of California San Diego (UCSD), which opened its campus microgrid to a tour before ENSA opened.

Like many universities, UCSD has been running a microgrid for decades, but since the 1990s it has made a major effort to push out the cutting edge of microgrid technology, both to advance understanding of how they operate and to improve the campus’s carbon footprint. It’s an effort that POWER profiled in the November 2010 issue (see “Smart Power Generation at UCSD”), but UCSD has not rested on its laurels.

Since POWER visited the campus six years ago, the university has added another 1.8 MW of solar PV generation, for a total of 3 MW; a two-unit, 2.8-MW fuel cell system; two different battery storage systems; and an array of EV charging stations.

The larger of the two battery systems, a 2.5-MW/5-MWh array supplied by Chinese firm BYD (Figure 2), is used mainly to balance the campus’s PV generation, Bill Torre, UCSD’s program director of energy storage, told POWER during a tour of the microgrid. 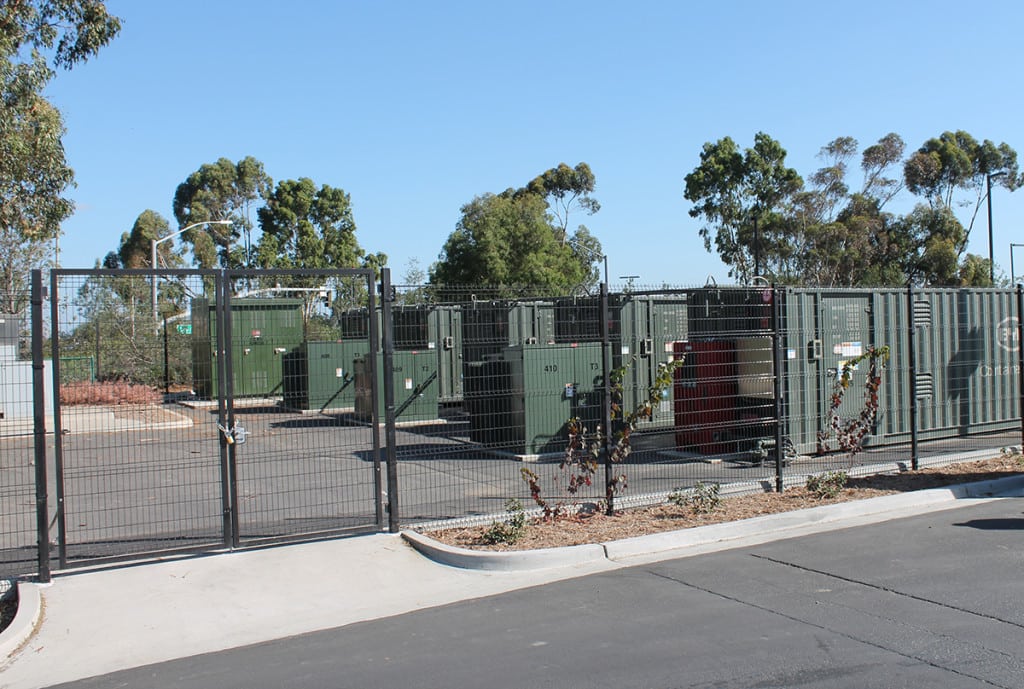 “We maintain a 0-MW interconnection with San Diego Gas & Electric [SDG&E] under normal operations,” he said. “So we’re not taking or sending power to the grid.”

The suite of generation options, including two 15.5-MW gas turbines from Solar Turbines, is able to meet the campus’s 42-MW load under day-to-day use. The system uses the grid for backup when necessary (for example, if one of the gas turbines needs to be shut down for maintenance) and it can go into island mode if the SDG&E grid goes down. That happened during a major blackout in 2011, when most of the San Diego area was without power for about six hours. Torre said about 60% of the battery system’s cost was covered by California’s Self-Generation Incentive Program.

The battery systems are also ongoing research projects, Torre said. The university is studying their operations and gathering data on their performance to better understand how large grid-connected batteries function over the long term. UCSD is also inaugurating a plug-and-play battery test lab next to the BYD array that can accommodate systems up to 500 kW. This project, funded by the Department of Energy’s Advanced Research Projects Energy initiative and overseen by the school’s Center for Energy Research, aims to provide tools for validating battery technologies using the UCSD microgrid. The first test system is being connected next week, Torre said.

The fuel cell system, supplied by FuelCell Energy (Figure 3), does double duty in supplying power and driving an absorption chiller that uses the system’s waste heat. That chiller runs alongside the electric chillers that supply the bulk of campus cooling. 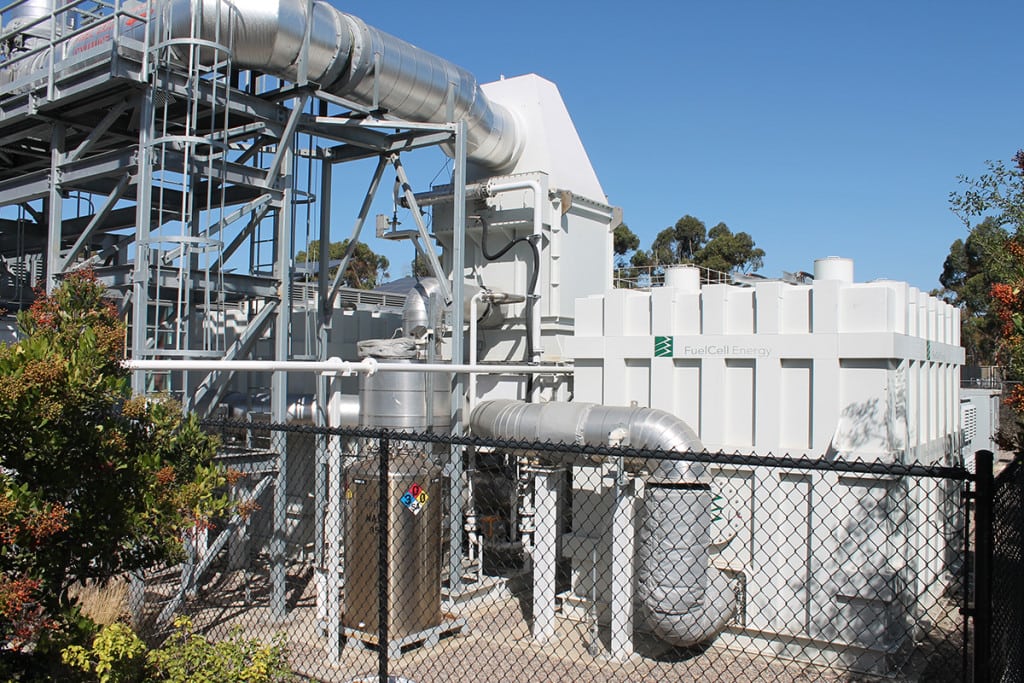 Torre said this allows the fuel cell to operate at around 80% efficiency. The system runs off biogas from the Point Loma Waste Treatment plant.