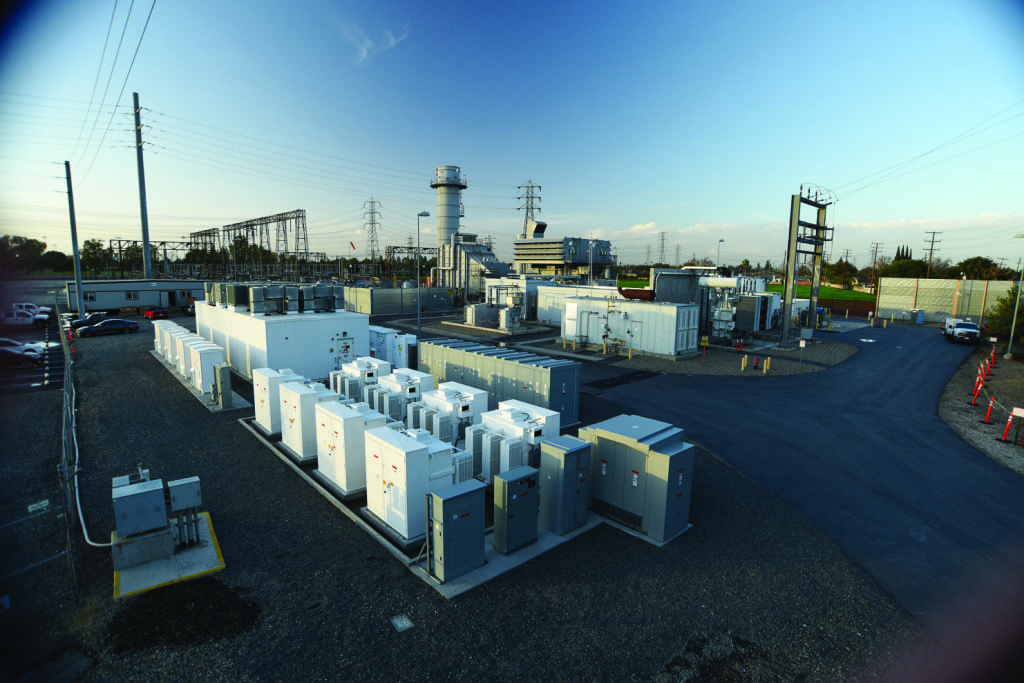 In October 2015, a major injection well rupture at the Aliso Canyon Natural Gas Storage Facility north of Los Angeles, California, led to almost 100,000 metric tons of uncontrolled natural gas being released from the underground reservoir before it was sealed more than 15 weeks later. That event, which forced thousands of evacuations and is thought of as one of the worst environmental disasters in U.S. history, left regional gas-fired generators in a lurch.

In California, which had embarked on a drive to boost gas-fired generation capacity to back up its surge of renewable generation, the dilemma was especially dire. But rather than pushing to reestablish gas supplies alone, and in an attempt to thwart the increasing risk to the electric system from disruptions in gas supply, the California Public Utilities Commission (CPUC) in May 2016 expedited the approval of utility-owned and third-party battery storage in Southern California Edison (SCE) and San Diego Gas and Electric territories (see “Battery Storage Goes Mainstream” in POWER’s May 2017 issue).

When the CPUC issued its emergency resolution, SCE, the largest subsidiary of Edison International and a prime power supplier to most of Southern California, was already working to improve the operational flexibility of its peaker fleet, including the 50-MW Center Peaker in Norwalk (see opening image) and the 50-MW Grapeland Peaker in Rancho Cucamonga.

“The Aliso Canyon emergency pushed us to think that combining our flexibility upgrades with energy storage could provide a unique opportunity to expand economic and environmental benefits,” Vibhu Kaushik, SCE’s principal manager for asset management and generation strategy at the company’s generation division, told POWER in August. That’s why SCE evaluated a proposal, submitted by technology conglomerate General Electric (GE) and Wellhead Power Solutions—a subsidiary of Sacramento-based independent power producer Wellhead Electric Co.—that combined a lithium-ion battery with an existing gas turbine, and which sought to operate it using an integrated control system. 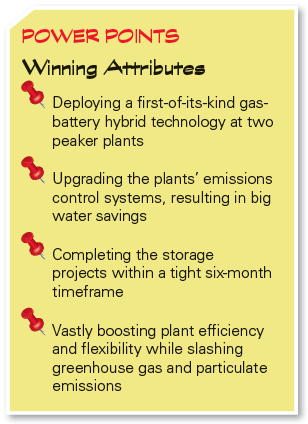 That technology, called a “Hybrid Enhanced Gas Turbine” (Hybrid EGT), fully integrates a 10-MW/4.3-MWh battery energy storage system (BESS) developed by GE energy startup Current with a 50-MW GE LM6000 aero-derivative gas turbine (Figure 1). Under normal conditions, GE noted, some gas turbines must run at minimum loads to provide spinning reserves to the grid, forcing them to burn gas even when the energy is not really needed. The EGT provides spinning reserves using the battery while also responding quickly to any changes in power demand, allowing the gas turbine to operate in coordination with the battery.

According to Wellhead Power, at a high level, the EGT promised to add 10 MW of high-speed capability into the existing LM6000 operating range, not on top of the existing operating range. “This allows the EGT to provide high speed energy, ancillary and grid support services, at a lower cost and smaller [greenhouse gas (GHG)] footprint than traditional thermal resources and without the energy neutrality issues associated with stand-alone storage,” it explained.

The Birth of Twin Projects

For SCE, the benefits were clear. “The presence of the BESS unlocks tremendous value in the two peaker plants by making the Hybrid EGT instantaneously available around the clock, providing spinning reserves even while the gas turbine is offline. This reduces greenhouse gases and other emissions by up to 60% even if never called upon to close a short-term gas supply gap,” Kaushik explained. “The resultant broader operating range has allowed the units to be much more operationally flexible.”

The company worked with Wellhead and GE to integrate equipment upgrades to the proposed solution to address its multiple goals of achieving water savings, GHG emissions reductions, and particulate reductions at the two peaker plants.

While the peaker units were originally designed to achieve air pollutant emissions standards while at close to full load, the company’s upgrades included changes to the turbine’s water injection algorithm, adding an enhanced new selective catalytic reduction system with optimized ammonia injection, and a new carbon monoxide oxidation catalyst. A crucially significant achievement of these upgrades—particularly because the plants are sited in drought-stricken Southern California—is that a lower water rate for nitrogen oxide emissions control is poised, based on operating forecasts, to reduce water consumption at each peaker by about 45%, saving up to two million gallons of water annually per site.

Also notable is that at the core of each project, the team built an advanced hybrid control system (HCS), which ensures that the plant delivers the expected power output by optimizing battery and turbine outputs. According to Kaushik, the “HCS can also manage external requirements (such as not-to-exceed limits) to further determine optimal blends for specific operations, including the turbine’s water injection system, sync-idle control, and power output system.” The HCS is groundbreaking, he added, because “it is the first time an HCS integrates a gas peaker and battery together to bring the benefits of each into one seamless and interoperable system.”

Yet another winning aspect of these projects is their rapid completion. The CPUC emergency resolution required each BESS to be in service by December 31, 2016, which meant that SCE had little time to sign contracts after evaluating proposals. Development of each project’s storage component spanned roughly five months, and following deployment of the storage components, the turbine upgrades and their controls integration with the battery were completed in about three months.

This was achieved despite many logistical hurdles. “To begin with, we were building two critically important projects simultaneously, in separate local permitting jurisdictions dozens of miles apart, in a notoriously-bad Los Angeles area traffic corridor—and using essentially the same team on both projects,” SCE said. Obtaining permits and regulatory approval from cities, counties, special districts, and multiple state agencies for both facilities would have typically taken a year, or even several years, but SCE had a “very tight window of less than a month,” Kaushik said. “To address comments from the agencies, we had to modify plans, including some construction details, within this short planning and construction window.”

SCE also shaved internal and external approval requirements that would have been triggered if the projects expanded beyond SCE’s property lines by insisting that each BESS fit within a relatively small footprint and that other improvements be contained within both physical and regulatory boundaries. “For example, the improved replacement catalyst needed to fit into the same enclosure as the original,” said Kaushik.

A Model for Future Installments

Today, operators monitor and control all functions at the Center Peaker and Grapeland Peaker plants from a secure remote SCE facility. GE is under contract to maintain the BESSs and assure the units perform to contractually guaranteed performance standards. As each BESS is always online and synchronized with the grid to provide immediate response, the system is already paying off for SCE. The company expects a 50% reduction in the number of turbine starts and a 60% drop in turbine operating hours. “Overall, this leads to roughly a 60% reduction in GHG emissions and particulate emissions,” Kaushik said.

Meanwhile, the gas turbine modifications have improved startup time from about 10 minutes to less than five minutes in the hybrid configuration. “Once online and synchronized, the turbine only needs two to three minutes to ramp up to full load. With instantaneous response capability, each plant can now participate in [the California Independent System Operator’s (CAISO’s)] spinning reserves markets 24-7, with no fuel consumption or emissions while the turbine is offline,” said Kaushik.

Each project’s battery-and-turbine pair has also been invaluable in supporting green energy variability by filling in the gaps with their immediate response capability. The cascading benefits to California residents span environmental benefits as well as cost savings owing to a generally more efficient resource dispatch stack, which could work to tamp down wholesale prices for customers.

Finally, while the control algorithms developed for the various use cases were designed specifically for these projects, the underlying concept, which can be modified to work with other generation assets large and small, is certain to have countless applications throughout the electric utility industry. GE is actively pursuing further applications of the technology with power generators worldwide. SCE, too, is exploring similar hybrid deployment within its own fleet.

“It is no longer enough to build capacity,” CAISO Vice President Tom Doughty said at the Center Peaker ribbon cutting in March, perhaps best surmising the Hybrid EGT’s future appeal. “The new coin of the realm is flexibility. That is exactly what this plant provides us.”■