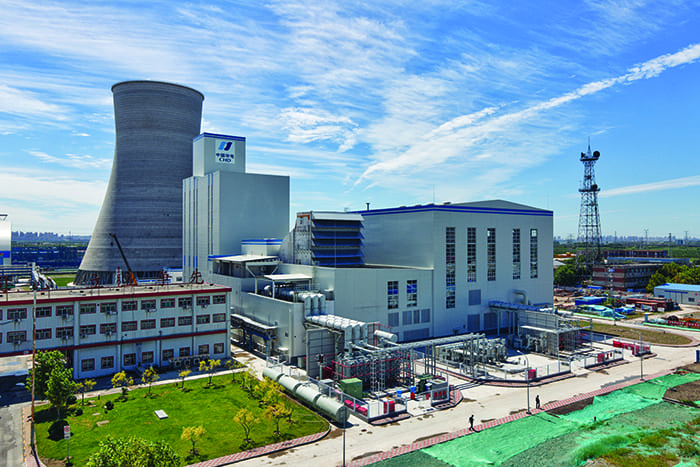 Reducing fine particulate emissions was a driving factor in the shift from coal to gas at the Junliangcheng power plant in Tianjin, China. Among the other benefits is a reduction in carbon dioxide emissions, which is important as the world’s most populous nation strives to become carbon-neutral before 2060. The coal-to-gas transition was not only a winning strategy for the environment and local community, but also for the plant, which was selected as POWER’s 2021 Reinvention Award winner.

Like many countries around the world, China is on a mission to cut back on coal-fired power generation. In fact, in 2020, the portion of China’s installed electric generation capacity that was fueled by coal dipped below 50% for the first time ever. It stood at 49.1% at the end of the year, according to the China Electricity Council.

The trend has been driven by President Xi Jinping’s desire to see carbon dioxide (CO2) emissions peak before 2030, and decrease steadily thereafter. He has set a goal for China to be carbon-neutral before 2060.

One way that the country has been transitioning away from coal is by shifting more generation toward natural gas. While gas generation does emit CO2, it is about 44% less than coal on a per MMBtu basis. When you add in the higher average plant efficiency gas-fired power plants offer compared to coal facilities, the reductions in CO2 emissions are more than 59% on average.

While President Xi’s carbon-neutral goal is relatively new—he made that announcement while speaking via videolink to the United Nations General Assembly on Sept. 22, 2020—other emissions reduction measures have been in place for years. One example is the Tianjin Clean Air Action Plan.

Tianjin is a coastal metropolis in northern China on the shore of the Bohai Sea. According to some estimates, it is the fourth-largest urban area in China, with nearly 14 million residents. Tianjin has been a major seaport for centuries, and it is considered the gateway to Beijing, which borders to its northwest.

Due to air pollution problems, particularly with PM2.5 (fine inhalable particulate matter with diameters that are generally 2.5 micrometers and smaller), the Tianjin government developed its Clean Air Action Plan and released it in 2013. Among the recommended actions was a request for the Tianjin Huadian Junliangcheng Thermal Power Plant to make at least a partial coal-to-gas transition by 2017 (Figure 1).

The Junliangcheng facility has a long history. The first 50-MW unit began operation in 1966. By 1971, the plant had expanded to four 50-MW units. From 1985 to 1993, four additional 200-MW units were added, which made the facility the first 1,000-MW power station in Tianjin. Between 2009 and 2010, the four 50-MW units were replaced by two 350-MW units. The four 200-MW units were closed between 2015 and 2017. Since then, another 350-MW coal unit has been added. Most recently, an advanced gas turbine combined cycle unit with a capacity of about 661 MW when operated in full condensation mode was added. (The unit is also capable of operating as a combined heat and power unit, supplying steam to various customers, which affects electrical output to some extent.)

China Huadian Tianjin Junliangcheng Power Generation Co. Ltd., part of China Huadian Corp., is the owner of the facility. It contracted with GE to supply the gas turbine technology; Harbin Electric was selected to provide the steam turbine, generator, and balance-of-plant equipment. Contracts were signed in March 2017. The owner also subcontracted to facilitate design work, construction, and commissioning activities.

Junliangcheng’s gas turbine was shipped from GE’s manufacturing facility in Belfort, France, to the port of Antwerp, Belgium, in September 2018. It arrived at the site in Tianjin in April 2019. The unit’s first fire and its first synchronization with the power grid both occurred in September 2020. It commenced commercial operation on Jan. 28, 2021. Achieving such a rapid construction timeline is notable because it was done in spite of obstacles caused by the worldwide pandemic.

“The most challenging aspect was COVID-19 related,” Yibin Jia, senior project manager with GE Gas Power, told POWER. “We could not get enough commissioning resources so we had to do a lot of support work remotely. I think that was the most challenging piece of the project.”

GE had originally intended to mobilize 26 overseas engineers, making them available to participate in local testing. However, when the time came, none of the desired engineers could travel due to the pandemic. “Onsite support is the norm. In this case, remote support required some special apps, and the overseas engineers looked at data to monitor performance and, in some cases, it took more time to do troubleshooting,” Jia said. In the end, the testing was successfully completed with only one test manager onsite.

Having to rely on remote help was not always a hinderance, however. “Through tele-support we completed commissioning within 10 days. That’s much faster than we expected,” Jia said. “Normally, it’s about one month, so we only required one-third of the time. Also, the first fire—fully conducted by the local team—achieved the completion within three days. The customer thought it would take one week.”

Training and Safety Are Always a Priority

At the height of construction on the Junliangcheng project, which reportedly cost more than 1 billion RMB ($156 million), more than 700 people were working onsite. Ensuring all employees were properly qualified for their jobs and adequately trained in safe work practices was a high priority.

“There are actually three kinds of controls: from national and local government, from the construction itself, and also on the owner side,” Jia said. “Local rules require workers to be certified before they go to a site to do construction work—this is the first line. Another line is controlled by the construction company, like some exam or certification. And another thing is the owners themselves can also have some certification for the people who pass the exam before going to the site.”

In the end, the policies and procedures accomplished the goal. “We completed the project without any onsite injuries,” Jia reported.

As previously noted, GE also supplied its Mark* VIe distributed control solution, which helps Junliangcheng improve asset visibility, reliability, and availability, while reducing operating and maintenance costs. The Mark VIe is utilized for systemwide programming, configuration, trending, and analyzing diagnostics. The company says it provides a single source of quality, time-coherent data at the controller and plant level to diagnose and adjust how the plant is operating in real time. GE told POWER the use of remote monitoring and troubleshooting solutions increased during the global pandemic, and the general trend toward centralized offsite operations has accelerated as a result.

A Project Worth Replicating

GE’s HA gas turbine portfolio is one of the world’s fastest-growing fleets with more than 100 units ordered by more than 50 customers across 20 countries. On Nov. 9, 2020, the company announced it would be involved in an even larger coal-to-gas project in China. This time, state-owned power utility Guangdong Energy Group Co. Ltd. placed the order for three 9HA.02 gas turbines for its Dongguan Ningzhou combined cycle power plant in the Guangdong-Hong Kong-Macao Greater Bay Area (GBA).

GBA is an agglomeration of cities put forward by China to strengthen international cooperation and promote lower-carbon, inclusive, coordinated, and sustainable development. The Ningzhou plant will add 2.4 GW of power to the Guangdong province in alignment with national goals to transition from coal to natural gas, and it will become one of the largest gas power plants in China’s mainland. GE will again partner with Harbin Electric to provide the steam turbine, generator, and balance-of-plant equipment for the station, which is expected to be operational in 2022. ■