With the landslide re-election of Governor Jerry Brown, California looks certain to continue its suite of low-carbon policies, including the AB32 cap-and-trade program for greenhouse gases, energy efficiency programs funded to the tune of a billion dollars a year, and its renewables portfolio standard (RPS) of 33% by 2020.

In fact, Gov. Brown has suggested going well beyond the RPS goal. “While reaching a 33 percent renewables portfolio standard will be an important milestone, it is really just a starting point—a floor, not a ceiling,” Brown wrote in his signing statement for the RPS legislation in 2011. “Our state has enormous renewable resource potential. I would like to see us pursue even more far-reaching targets. With the amount of renewable resources coming on-line, and prices dropping, I think 40 percent, at reasonable cost, is well within our grasp in the near future.”

The passage of AB327 in 2013 clarified that the goal was a floor, giving the state Public Utility Commission the authority to go beyond 33%.

This, and the rapid growth of solar power, has led to a flurry of planning studies examining the issues around high levels of renewable energy. A study funded by utilities was released in January 2014, and now a study funded by the renewables industry is in the works.

The first, by Energy + Environmental Economics (E3) and funded by the five largest utilities in the state, looked at various scenarios for a 40% or 50% RPS, plus 7,000 MW of behind-the-meter distributed solar in 2030.

“The renewable resource portfolios assessed represent a significantly higher penetration of wind and solar than has been achieved anywhere in the world,” the study authors noted. In their highest case, wind and solar combine to meet 43% of state demand.

The report found that “overgeneration” is likely to be the biggest problem. Overgeneration occurs when “must-run generation—wind and solar, combined-heat-and-power (CHP), nuclear generation, run-of-river hydro, and minimum levels of thermal generation needed for grid stability—is greater than load plus exports.”

In other words, when the wind blows and the sun shines, too much power can be produced. The simplest solution, simply curtailing wind and solar generators, is also the highest cost option, wasting large amounts of energy—in some cases, up to 9% of the renewable generation.

By relying on curtailment, E3 estimates overall rate impacts of the 40% renewable mix would be about 3.2%, while costs of the 50% portfolio could be between 9% and 23% higher than a baseline scenario. The baseline scenario, by the way, they predict will be 47% higher than current rates. The much higher costs of the 50% renewables case are attributable to an “exponential increase in renewable curtailment,” which would require a significant “overbuild” of renewable generation.

To solve the problem, E3 recommends a “portfolio of integration options,” including increasing regional coordination across the West, using a more diverse portfolio of renewable resources, deploying energy storage, and using advanced demand response that can adjust loads both upward and downward.

These integration options could cut the higher costs in half by reducing curtailment.

Two studies critiqued the E3 study, both faulting it for not seeking out a least-cost mix of renewables and relying too much on solar. Dariush Shirmohammadi, former director of regional transmission at the California Independent System Operator (CAISO), writing for the California Wind Energy Association (CalWEA), complained that the integration options were only applied to the “large solar” scenario. Applying them to the “diverse” 50% renewable scenario would reduce overall rate impacts from 9% to only 3.9%, and shifting the mix to more wind and less solar would further reduce costs to a 2.2% increase.

Another review, by Crossborder Energy, for CalWEA and The Alliance for Solar Choice echoed the critique, pointing out that most scenarios relied on solar for 80% of the incremental generation. The current California RPS requires that utilities choose a “least-cost, best-fit” mix of resources, where higher cost resources sometimes prevail because they fit better in the overall portfolio.

The E3 scenarios “do not represent reasonable or likely portfolios of resources to achieve a 50% RPS goal, because they add solar far beyond the point where it ceases to be economic,” Crossborder argues.

V. John White, long-time director of Sacramento’s Center for Energy Efficiency and Renewable Technology (CEERT), thinks that recent experience and the E3 study show that cost is not an impediment to growth.

“The more we go beyond 33%, the fit matters more than the cost,” he told me. “In the future, how the pieces fit together will matter more. Having the low-carbon future drive grid planning will be about more than mandating procurement but about planning for the low-carbon grid.”

The rapid growth of solar makes White concerned about an imbalance in California’s renewable portfolio. “We’ve been watching the duck chart,” he says, citing the famous graphic put together by CAISO, showing a prominent late afternoon peak as solar output declines.

A major study currently under way is looking at the issue though similar means but with a different end vision.

The National Renewable Energy Laboratory (NREL), GE Consulting, and JBS Energy are looking at how California’s power sector can cut carbon emissions in half by 2030, on the way to the 80% carbon reduction goal laid out by Gov. Schwarzenegger in an executive order. Funding comes from the renewables industry, foundations, and the U.S. Energy Information Administration (EIA).

In the first phase of the study, released in August, NREL found that hitting the 50% carbon reduction point could be done at essentially no net cost, with $5.3 billion in costs offset by $5.5 billion in savings. The study assumes a mix of new renewables, similar to E3’s “diverse” case, and greater regional integration.

“With carbon reduction goals as the starting point, it became clear right away that the ‘gas budget’ is limited,” he explained. “We can’t use gas for all the flexibility and ancillary services, since it simply burns too much gas to hit the emission reduction targets.”

Instead, natural gas generators will be used to provide “block-loaded intermediate generation,” with units committed in advance to blocks of time and will run at full capacity to fill gaps and provide slower ramping. This reduces cycling costs and improves the heat rate, Caldwell says, as well as improving the economics of the gas fleet.

“We’re going to have to change the paradigm for balancing the system,” he argues.

The second phase of the study is due in January, and will include additional scenarios and analysis, and a review by an independent technical committee that includes utilities and state agencies. The EIA will fund the modeling in Phase 2, to learn from cutting-edge research. “They don’t see this kind of thing in their traditional databases and models,” said Caldwell.

A key recommendation from both of these studies is the importance of wider regional operations, and steps are already being taken to improve collaboration. A significant first step went live on Nov. 1, as Pacificorp joined operations with CAISO to create the Energy Imbalance Market (EIM). The EIM extends CAISO’s real-time balancing market, choosing the least-cost resource every five minutes to meet the need for balancing across the system.

“Better coordination in the way we manage energy in the West is crucial to reduce costs for customers and more effectively integrate renewable energy sources,” said Pat Reiten, president and CEO of Pacific Power, a unit of PacifiCorp.

A 2013 study by E3 said the EIM would bring savings to consumers of $21 million to $129 million per year with minimal annual costs to participants.

A major part of the saving comes from sharing generation reserves. Instead of each utility holding power plants to meet its own operating reserves, the EIM allows them to effectively share their reserves. A 2012 study by NREL and Xcel Energy found that an EIM covering “the entire areas of the Western Interconnection not currently participating in regional markets” would reduce reserve targets 35% to 46% on average (Figure 1). 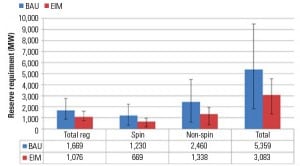 PacifiCorp, which operates across a six-state area, is the only utility outside of California participating in the EIM now, but NV Energy was given permission by Nevada regulators to join the EIM starting in October 2015. Both utilities are owned by Warren Buffet’s Berkshire Hathaway Energy.

A similar EIM is being developed by the Northwest Power Pool, merging 16 balancing areas into a single operating unit. The Pool, composed of utilities in the Pacific Northwest, British Columbia, and Alberta, put out an RFP seeking a market operator for an imbalance market. Proposals were due Dec. 19, with a vendor to be selected in early 2015 and operations beginning in late 2017.

Another important integration option for high levels of renewables is energy storage, and steps are being taken to promote it. In response to AB2514, passed in 2010, the California Public Utility Commission (CPUC) has issued rules requiring utilities to procure 1,325 MW of cost-effective storage resources by 2020, in an effort to transform the market in the state for storage resources.

There are four biennial procurement periods, with the first RFP going out in December. The first round will divide 200 MW of storage among the three utilities, spread between transmission, distribution, and customer-owned applications.

Meanwhile, Southern California Edison announced plans in November to procure more than 260 MW of energy storage through the process to make up for the retirement of the San Onofre nuclear plant, called the Local Capacity Requirements process. Battery systems, on both sides of the meter, account for 235 MW of the total, with 16 ice thermal storage projects making up the balance.

For now, California is in continued deployment mode for renewables, as utilities seek to hit the 2020 goal of 33%. “From a planning standpoint, the 33% goal is over, and it’s almost over for procurement,” said Caldwell. “Most people think we’re going to go past 33%.”

White of CEERT doesn’t expect legislation to expand the RPS, though the CPUC could set goals beyond 2020 on its own.

CEERT, along with the Coalition of California Utility Employees, Iberdrola Renewables, the Independent Energy Producers Association and the Large-Scale Solar Association, all requested that the CPUC set post-33% goals earlier this year. On Nov. 24, the commission denied the request, saying it “must first implement AB 327.”

However, it did announce plans to open a new rulemaking in early 2015 to look at RPS targets beyond 33%, and invited parties to resubmit proposals.

“If there is legislation,” White predicts, “it will be around setting a 2030 greenhouse gas target where renewables, energy efficiency, grid expansion, and demand response are the means to achieving the goal.” AB32 currently sets a binding goal for 2020 only, while the executive order sets a non-binding 2050 target.

“California has arguably the world’s best renewable resource mix,” says Caldwell, citing the variety of solar, wind, geothermal, hydro, and biomass resources within 100 miles of more than 30 million people. “If we can’t do it here, who can?”