Much attention has been devoted recently to the increased cycling that is necessary in fossil plants as more renewable capacity is added to the grid, but data on the precise impacts has been slight. Now, a new study from the National Renewable Energy Laboratory (NREL) aims to correct that. The key findings: While cycling would increase with greater wind and solar penetration, and with it cycling costs, these would be more than offset by enormous fuel cost savings. In addition, the increased cycling would not increase emissions enough to offset savings from greater use of renewables.

The report is the second phase of the Western Wind and Solar Integration Study (WWSIS). WWSIS is supported by the Energy Department’s Office of Energy Efficiency and Renewable Energy, as well as its Office of Electricity Delivery and Energy Reliability. The study was undertaken by NREL, GE, Intertek-APTECH, and REPPAE. The first phase of WWSIS, released in May 2010, examined the viability, benefits, and challenges of integrating high concentrations of wind and solar power into the Western Interconnection grid. WWSIS-1 found it to be technically feasible if certain operational changes could be made, but also raised questions about the impact of cycling on wear-and-tear costs and emissions.

To calculate cycling costs and emissions impacts for WWSIS-2, NREL designed five scenarios modeling wind and solar penetration in the U.S. portion of the Western Interconnection in 2020. The scenarios included a 0% renewable baseline, the 2020 Portfolio Case (9.4% wind and 3.6% solar) created by the Western Electric Coordinating Council (WECC), and three different mixes of 33% penetration (high solar, high wind, and an equal mix). This was equivalent to 25% of the power in the Western Interconnection (including Canada and Mexico) coming from wind and solar energy on an annual basis.

The study assumed an average natural gas price of $4.60/MMBtu, significant cooperation between balancing authorities, and optimal usage of transmission capacity. NREL modeled operations of the Western Interconnection in five-minute intervals across the entire year to understand potential impacts each hour.

On emissions, the study found that increased cycling in these scenarios had only a minor impact compared to the gains that would be expected from displacing fossil generation. The differences were less than 5% either way. Carbon emissions reductions with more frequent cycling were <0.2% less than expected, while SO2 emissions reductions were 5% less than expected. However, emissions of nitrogen oxides were reduced 2% more than expected. Overall, 33% wind and solar energy penetration in the U.S. portion of the Western grid would avoid 29% to 34% CO2 emissions, 16% to 22% of NOx emissions, and 14% to 24% of SO2 emissions. (The study did not examine cycling impacts on mercury and air toxic control equipment.)

One reason for the largely negligible emissions impacts was that, not surprisingly, most of the cycling that occurred was in natural gas plants. The study found that, on average, 4 MWh of renewables would displace only 1 MWh of coal generation but 3 MWh of gas.

Still, the biggest potential impact was the increase in ramping of coal units, but the precise impact varied significantly between the high solar and high wind scenarios (which assumed a 25%/8% mix of solar and wind or vice versa). Ramping increased more under high solar, but high wind displaced the most total coal generation.

Because of this impact, the high solar scenario also had the highest cycling costs, ranging from $52 million to $157 million (the range reflects uncertainty in wear-and-tear). However, combustion turbine plants generally bore the large brunt of the increase in costs—again, because they bore the brunt of the cycling. But regardless of the plant type, cycling costs were dwarfed by the fuel savings (Figure 1). 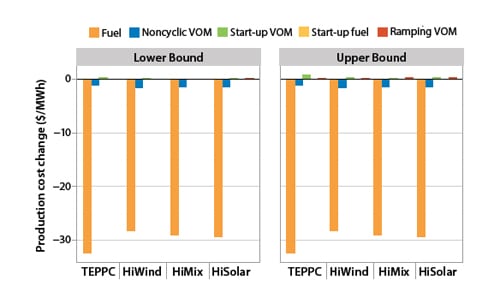 As comparison, the study also ran the models under two additional assumptions about future gas prices, $2.30/MMBtu and $9.20/MMBtu (in addition to the $4.60 base case). It found that changes in gas price had a larger impact on cycling costs than renewable penetration, because it had a dramatic effect on how gas-fired plants were used (i.e., baseload with cheap gas and peaking with expensive gas).

The authors conceded during a press call on the report that they did not have access to data on transmission or power purchase agreements that could be implicated by the potential changes. Thus, the study might have modeled more flexibility into the system than it would actually have.

The study also focused only on operational issues and did not consider other factors such as power market impacts, capital costs, or transmission costs. Future work at NREL may examine these issues.