POWER Editor Ken Wicker recently sat down with John Rice, president and CEO of GE Energy, to discuss the company’s past year, which was marked by lower turbomachinery sales but which featured a number of acquisitions by the energy giant. Among the more important purchases were the assets of ChevronTexaco’s coal gasification unit and portions of Glasgow-based AstroPower Inc.—a once-successful photovoltaics (PV) business that recently emerged from Chapter 11 bankruptcy protection. 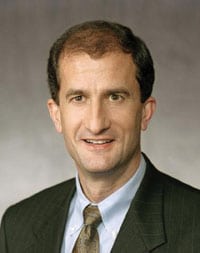 Early last December, however, GE Energy made perhaps its biggest announcement of 2004: that it had signed a letter of intent with IPP Calpine Corp. (San Jose, Calif.) to jointly build a combined-cycle plant based on a 60-Hz version of GE’s most advanced gas turbine technology, the H System (Figure 2). The 775-MW plant, whose location in North America has yet to be announced, is expected to enter commercial operation in the spring of 2008. With the ability to reach 60% thermal efficiency, this plant will be a milestone for the generation industry. The first combined-cycle plant powered by a 50-Hz version of an H System turbine was commissioned in September 2003 at the Baglan Bay Power Station in Wales and has racked up 5,000 hours of successful operation to date. 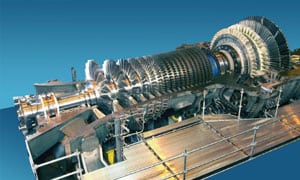 2. Raising the bar. GE Energy recently announced that, with Calpine Corp., it intends to build a 775-MW combined-cycle power plant based on GE’s advanced H System gas turbine somewhere in North American by 2008. The H System is capable of operating at 60% thermal efficiency.Courtesy: GE Energy
Asked about why the 50-Hz version was brought on-line first, Rice responded that a big reason was the UK government’s eagerness. “They wanted the output ASAP and knew we could deliver on our promise to make Baglan Bay the most efficient combined-cycle power plant in the world,” Rice said. Another reason for siting the plant in the UK was that when GE was planning the H System’s debut a few years back, the U.S. was preoccupied with the power bubble, so building a prototype project in America didn’t make sense. “By installing and maintaining only one unit initially, we were able to work out the inevitable kinks. Now we have a much better handle on what it will take to maintain a fleet of H System gas turbines,” Rice explained. “As a result of the successful deployment in the UK, we recently sold several units to the Japanese utility TEPCO, and they will be coming on-line in late 2006 or early 2007.”

Rice went on to discuss the worldwide generation market environment, the LMS100 gas turbine, GE’s recent acquisitions, and the company’s outlook for the future in several markets. Following are highlights of that conversation.

Wicker: Can you give our readers an update on the 100-MW LMS100 gas turbine GE introduced last year?

Rice: We’re excited about the technology. It has 46% efficiency in a simple-cycle configuration as well as fast-start and turn-down capabilities. We believe it is the perfect product for the market conditions which lie ahead. The LMS100 has characteristics that similarly rated gas turbines available today cannot offer—including high part-power efficiency, the ability to be cycled without increased maintenance cost, a low lapse rate that facilitates production of power on hot days, and a modular design for ease of maintenance. What’s more, the LMS100 can reach full power in 10 minutes, and it has load-following capability. We believe there’s a gap in the gas turbine market in the 80- to 160-MW range that the LMS100 fills perfectly. It’s a real workhorse that will hit those mid-merit size ranges. In addition to the previously announced sale of the LMS100 to Basin Electric Power Co-op’s Groton Generating Station in South Dakota for deployment in 2006, within the next six months we’ll be announcing the shipment of another three to five units late this year.

Wicker: How’s business in the U.S.? Given that America is adding very little new generating capacity these days, is GE looking harder for sales elsewhere?

Rice: Before 2000, the U.S. was a huge part of our market. With low gas prices and steadily growing demand for electricity, we enjoyed double-digit demand for our gas turbines. Now, however, 75% of our revenue comes from overseas. China, India, the Middle East, and Southeast Asia are where we’re now seeing double-digit growth rates. It’s just those regions’ turn to be up in the business cycle.

The fact that two million people in the world lack electricity is an issue that our turbines help to address. Governments throughout the developing world are aggressively building the infrastructure to deliver electricity to those in need, and we’re proud to be both a catalyst and beneficiary of that situation. The fact that so many people live in poverty and must use kerosene lanterns at home at night must change. As you know, access to a reliable electricity supply does wonders for the economic well-being of a community. Now more than ever, nations are aware that their citizens want and deserve electricity. Because of that, worldwide demand continues to increase, and we’re proud to help meet it with our gas turbines.

Meanwhile, the U.S., Europe, and Japan are mature markets where demand for new turbines is stagnant. Consequently, most of our business in those regions involves providing reliable O&M services and helping power plants meet increasingly stringent environmental regulations.

Wicker: Which segments of the power business are growing for GE, and why?

Rice: In various parts of the world, different aspects of our business are growing. Because we are agile, we can focus our resources where the opportunities present themselves. For example, the wind-energy business is growing 15 to 20% a year, and we believe it may be a billion-dollar market in a few years. We wouldn’t have bought Enron Wind’s assets in 2002 if we didn’t think that.

To continue on the subject of wind, last year’s renewal of the Renewable Energy Production Tax Credit certainly was welcome news on the home front, and now we need to lobby Congress to keep it continuous. The fact that the PTC was allowed to lapse wrought havoc on the entire industry and obviously made our planning difficult. However, we expect that at some point—probably in about five years—we’ll no longer need the PTC. As for current challenges in the wind industry, I’d point to the increasing cost of steel as one of the biggest. For example, when we bought Enron Wind’s assets, we expected that our turbine costs would fall 10% year after year—but then steel prices began to rise. However, we expect supply chain costs to eventually decrease and make wind energy more competitive.

Wicker: I’m glad you mentioned your acquisition of Enron Wind, because GE Energy seems to be on a buying spree of late. Last year, you also took stakes in photovoltaics and coal gasification businesses. Why have you become so acquisitive, and are there any other businesses you have your eye on?

Rice: Any smart businessman knows that you buy low and sell high. And if you can afford it—as GE can—buying a business with great upside potential while it’s still small is the best time to do so. In the cases of Enron and AstroPower, both companies were in financial trouble, but once they emerged from bankruptcy, the timing was right to invest. We think the PV business is going to be a great market in a few years. We didn’t buy AstroPower to grow it from $50 million a year to $80 million a year in sales; we bought it with the intent to expand it over time into a business that does $1 billion annually.

We’re also very excited about the coal gasification assets we recently acquired from ChevronTexaco. The time horizon on that technology is a little further out. But with our recent letter of intent with Cinergy and Bechtel to study the feasibility of building a commercial, integrated gasification combined-cycle generating station, we obviously think that technology has the potential to help coal—America’s most abundant energy resource—meet increasingly strict emissions standards.

Wicker: John, thanks for being so forthcoming, and good luck.