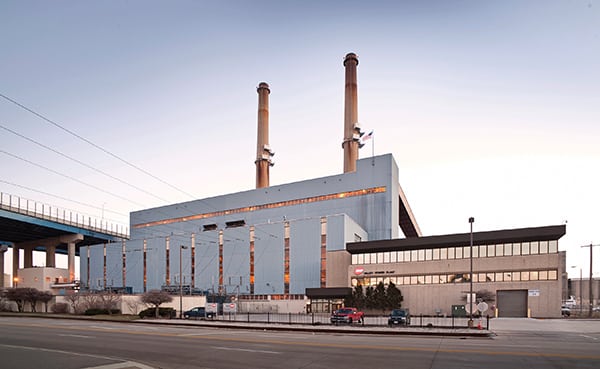 Converting a boiler’s fuel source from coal to natural gas involves a lot of planning and reengineering. When the plant is the sole steam service supplier to a downtown metropolitan area, it also involves a rigid schedule. The Valley Power Plant overcame several challenges to successfully complete one such conversion.

The Valley Power Plant has been playing a vital role for the City of Milwaukee since 1968. The plant has not only been generating electricity and providing voltage support for the downtown area since then, but it has also been supplying steam to a 1.8-square-mile network. Steam from the plant heats Milwaukee businesses, schools, hospitals, entertainment venues, condominiums, and more. Customers also rely on Valley’s steam for water heating, laundry, sterilization processes, and food processing.

But times are much different today than they were 50 years ago when the plant was conceived. Originally fueled by coal, the plant’s future was uncertain with more stringent environmental regulations on the horizon. Additional air quality controls would be costly, so a conversion to natural gas became an attractive alternative.

We Energies—owner of the Valley Power Plant—filed applications with the Wisconsin Public Service Commission (PSC) in April 2013 to convert the plant’s fuel source from coal to natural gas. The PSC approved the change in March 2014.

The Valley Power Plant is the only cogeneration facility providing district heating steam to the City of Milwaukee. Paul Haubert, major projects manager for We Energies, said the plant’s priority is to first meet steam demand and then provide voltage support and electrical generation. If the plant goes offline, there is no steam supply backup, which can be a very serious problem.

The plant consists of two distinct power group units, each consisting of two 640,000-lb/hr natural circulation boilers feeding a 140-MW steam turbine generator (STG) set. The original design included many redundant systems to reduce the likelihood of a complete loss of steam service. Steam can be exported via either extraction from the STG or directly from the boiler, using a pressure and temperature reducing system.

We Energies selected AECOM (which at the time was known as URS) to handle the conversion project’s engineering, procurement, construction, and startup (Table 1). The plant’s unique role as a steam source for the metropolitan area meant that the construction schedule and unit downtime for equipment tie-ins needed to follow strict planned outage schedules.

The gas conversion project was planned to occur in two phases. Unit 1 (Boilers 1 and 2) was to be converted in 2014, with Unit 2 (Boilers 3 and 4) completed the following year.

“Extensive design work was performed up front to understand how the existing plant operated and how the proposed changes would impact the plant,” said Ron Geida, AECOM’s project manager.

Because this was one of the first cogeneration gas conversion projects in the industry, the process team needed to run detailed models to calculate the effects of higher boiler temperatures. Among other things, the results led engineers to resize the desuperheating attemperation stations.

Various trip scenarios also had to be evaluated. On gas-fired units, a loss of flame occurs much more quickly than it does in a coal-fired boiler. Therefore, pressure excursion curves had to be developed because the collapse of the fireball could result in a rapid furnace pressure decrease, possibly damaging the boilers.

The solution was to replace the induced draft fan actuators so that the inlet vanes would move faster when flame was lost. The quicker response time averts potential boiler damage during pressure excursion events.

Another concern that the engineering team had to address was the amount of thermal energy entering the boiler at any given time. If firing rates weren’t controlled properly during a cold startup, uneven heating of the drum could occur, which would delay start times and could result in damage. After considering available options, burners with both main and pilot firing capability were selected (Figure 1).

The pilot feature is used to start the boiler, allowing the drum to be warmed evenly. When it comes time to increase load, operators switch over to the main guns and continue bringing the unit up.

But the new burners don’t just offer a smoother startup; they also allow the boiler to meet a 10 to 1 turndown ratio without taking any of the main guns out of service. This results in faster and smoother ramp rates and allows the plant to run at its lowest electrical output while still reliably supplying steam to customers through STG extraction.

“A strong commitment to maintaining or increasing the reliability, availability, and maintainability of the plant drove the design to a point where changes in the field and post startup were minimized,” Geida said.

Once approval was received for construction to begin, work groups only had about two weeks to mobilize and begin underground civil work. The project progressed smoothly, with no major problems until the first unit was ready for commissioning. During phase one testing, a rumbling noise was heard coming from one of the boilers when steam load was between 560,000 lb/hr and 620,000 lb/hr.

The original boiler manufacturer (Riley Power Inc., a Babcock Power Inc. company) and the burner supplier (Coen) were both consulted. Several outside experts were also brought in to study the problem. Sirois Engineering and Consulting was hired to gather detailed readings throughout the back pass of the boilers. Based on analysis of the data, the firm attributed the rumble to vortex shedding flow-induced phenomenon. 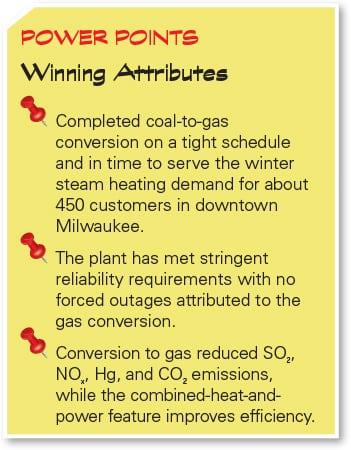 After several analytical runs on a proprietary software program, Sirois concluded that the only way to negate the vibration was to break up the standing wave in the back end of the boiler. To accomplish this, metal plates spanning the width of the boiler had to be hung at strategic locations inside the boiler.

Riley developed a plate support design and the plates were installed. The boiler was then operated through the previously problematic rumble zone several times. No vibration or noise was observed, allowing the boiler to be released for operation through its entire load range. Through both phases of the project, the rumble was only observed in two of the four boilers, even though all are of similar design.

Although the Valley Power Plant’s emissions were within limits and had decreased significantly during the 10 years prior to the project, as more-stringent environmental regulations take effect, installation of a new air quality control system (AQCS), including selective catalytic reduction and an SO2 scrubber, would have been required if the plant had continued burning coal. The switch to natural gas reduced SO2, NOx, Hg, and CO2 emissions without the expensive AQCS project. The elimination of coal and ash handling activities was also a benefit.

“We Energies and AECOM worked hand-in-hand with plant personnel and other contractors to deliver this project on time and on budget,” said Geida. For the team’s effort and superb end result, Valley Power Plant is a worthy POWER Top Plant Award winner.■