The new U.S. president will have a new set of priorities and regulatory policies that will affect the production and generation of electricity. The specifics of the new administration’s energy policy priorities were scant when this article was written, pre-inauguration, but the industry’s challenges are fairly well defined: meet steadily increasing electrical load demand during a period of political uncertainty with limited financial resources (Figure 1). The meltdown of the financial industry might be outside the control of the energy industry, but it has added to the industry’s burden. 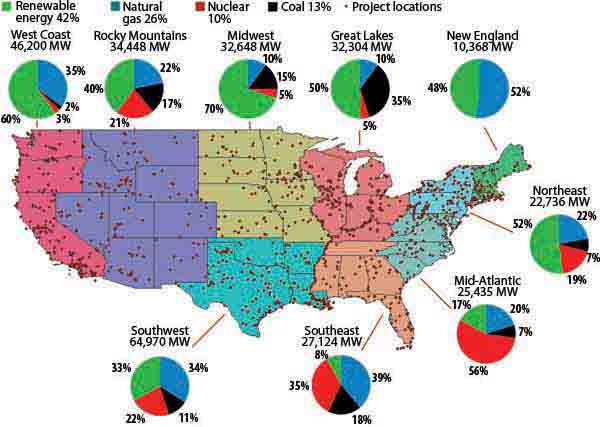 Many generation companies will continue to construct new facilities using low-cost coal—but with state-of-the-art emission control systems, while others will default to building new gas-fired plants. Every generator—be it a merchant generator, a public power entity, or a regulated utility—seeks to produce electrical power at the lowest price. But all generators also must continue to have access to financial markets when new power generation resources must be constructed or facilities must be upgraded with modern environmental control equipment that often costs more than the plant’s first cost (Table 1). Within this context, we present our views of what to expect in the power industry during 2009.

Coal-fired generating plants continue to supply about half of the electricity consumed in the U.S. each year. In recent years we have witnessed a significant amount of construction of coal-fired generation. Inflated natural gas prices and competitive coal prices have been the key drivers behind this development.

Since the beginning of 2000, 34 coal-fired generating plants, with a total capacity of 6,000 MW, have started operation. At present there is over 17,000 MW of new coal-fired capacity under construction in the nation. This represents activity at 29 plant sites, including 14 greenfield, or new plants, and 15 expansions to existing generating stations. These projects, valued at over $22 billion, have completion dates ranging from 2009 through 2012. One of these projects is Duke Energy Indiana Inc.’s 630-MW integrated gasification combined-cycle project at its Edwardsport, Ind., site.

Early 2007 marked the beginning of a trend of coal-fired generation project cancellations and delays. This trend is expected to continue, driven mostly by escalating capital costs and growing uncertainty over the possible implementation and timing of CO2 legislation.

An example of one coal-fired project that has fallen victim to concerns over CO2 emissions is Deseret Generation and Transmission Cooperative’s 110-MW unit addition at its Bonanza Power Plant. The Environmental Appeals Board of the Environmental Protection Agency (EPA) ruled that the EPA had no valid reason for refusing to require that the best available control technology be used to limit CO2 emissions from the new unit. That ruling was based on a 2007 ruling of the U.S. Supreme Court recognizing that CO2 is a pollutant under the federal Clean Air Act and can be subject to regulation by the EPA. That Supreme Court ruling has created concern throughout the industry that there could be far-reaching effects on new coal-fired projects. The current economic decline and tightening credit markets are likely to lead to additional project deferments and cancellations.

Regardless of these constraints, beyond 2008, 116 new U.S. coal-fired units—representing 41,000 MW—have been proposed. In fact there are still 34 units and nearly 11,000 MW of new coal-fired capacity that have a possible construction start scheduled for 2009. It is widely expected that the majority of these units and associated projects will, in the best of circumstances, be delayed beyond 2009 (Table 2). 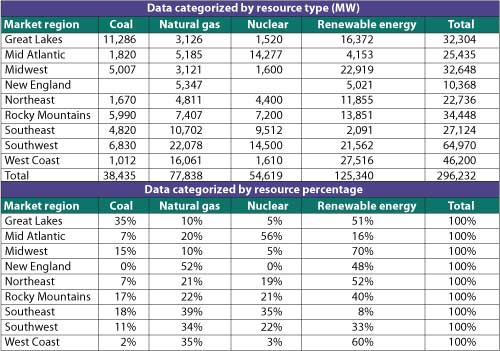 It remains to be seen how much coal-fired capacity will actually move forward. The average U.S. demand increase is anticipated to be 1.7 % per year through 2030. Not only is new baseload capacity needed to meet growing demand, but it is also needed to replace capacity scheduled for retirement from an aging generation fleet.

Over the past two years, we have seen double-digit growth in construction kickoffs for new capacity from natural gas, and currently more than 19,000 MW of new natural gas–fired generation is under construction. The prospect of building new gas-fired generating units is once again becoming more promising. As concerns mount over the many obstacles that developers of new coal-fired capacity are encountering, natural gas is becoming an attractive option.

There are few other alternatives for replacing new coal capacity that has been delayed or cancelled over the past two years. These proposed coal-fired units were scheduled to come online after 2010 to meet our increasing baseload demand requirements. Where new coal-fired projects are unable to move forward, it appears that gas-fired combined-cycle plants will be required to fill the void.

For quite some time, natural gas has been one of the leading fuels of choice for new electrical generating plants due to its offering few obstacles, quicker permitting turnaround time, lower capital construction costs, and a shorter construction schedule. Of course, the down side of relying too heavily on natural gas is price volatility and concerns over fuel availability.

Beyond 2008, an additional 76,000 MW from 560 gas-fired combustion turbines and associated combined-cycle steam turbines are under development and scheduled for construction kickoff from 2009 through 2013. Roughly 44% of this capacity has been proposed for a 2009 construction start, but the credit crunch and declining economic situation is expected to lead to multiple project cancellations and deferments.

At this time there are 188 gas-fired simple-cycle natural gas turbines at 74 plant sites under development in the U.S. These proposed units, if built, will supply 12,000 MW of primarily peak load capacity. In addition there are 230 combined-cycle gas-fired combustion turbines and 128 combined-cycle steam turbines capable of generating 63,000 MW under development at 100 plant sites throughout the U.S.

Nuclear: How Much Capacity Will Move Forward?

Long-term demand load projections show that baseload demand will continue to increase through 2030. Under this assumption, the outlook for the development of new nuclear energy generating capacity seems promising. As part of the Energy Policy Act of 2005, tax credits were put in place to encourage development and construction of at least eight new reactors. Although construction has not begun on a single reactor, a number of companies are moving forward with plans for new nuclear reactors.

At present, Industrial Info Resources, Inc. is tracking 52 new reactors that have been proposed for the U.S. These reactors are being developed as part of 34 projects with a total investment of $203 billion and represent a combined capacity of over 68,000 MW. Tennessee Valley Authority’s completion of Bellefonte Units 1 and 2 in Alabama is included in this total. It is probable that a great number of these projects will not move forward to the construction stage.

So far, combined construction and operating license (COL) applications have been submitted to the U.S. Nuclear Regulatory Commission (NRC) for 26 reactors. A COL is valid for 40 years from the NRC’s findings. Total project investment, assuming that all COL applications are approved and the units built, is estimated at $119 billion, using today’s projected capital costs.

In addition to the sites that have applied for COLs, three sites have been granted, and one other has applied for, an early site permit (ESP). By issuing an ESP, the NRC approves one or more sites for a nuclear power facility, independent of an application for a construction permit or COL. An ESP is valid for 10 to 20 years from the date of issuance and can be renewed for an additional 10 to 20 years. So far Exelon Generation Co. has received an ESP for its Clinton, Ill., site, Entergy Corp. was issued an ESP for Grand Gulf, Miss., and Dominion received one for its North Anna station.

No country has added the volume of new wind generation that the U.S. has over the past two-year period. Currently, in the U.S., more than 9,000 MW of renewable energy sources are under construction. Over half of the capacity will be online before the end of January 2009. The demand drivers for growth in the wind industry remain strong; however, the credit crisis could cause a downturn in activity during 2009.

On a positive note, Congress recently extended the Renewable Production Tax Credit through 2009. Added to this tax incentive is the fact that more than 30 states have enacted renewable portfolio standards that will drive investment in new renewable energy projects. Of course, constant concerns over climate change, and specifically global warming, help to create a favorable environmental for the development of new renewable energy projects. On the other hand, the development of new wind capacity has been somewhat constrained in some regions of the country because of inadequate transmission infrastructure.

Beyond 2008, an additional 133,000 MW of renewable energy has been proposed in the U.S. This includes anticipated construction starts between 2009 and 2014. In this sector of the industry considerable project fall-off can be expected over time. Difficulty in securing financing, permitting hurdles, and not in my backyard (NIMBY) activity is expected to lead to the delay or cancellation of a number of these projects. It is also important to note that many of these projects are competing with one or more similar projects for a predetermined amount of capacity to be bought by a utility or other entity. Under this scenario, a limited amount of capacity is selected to move forward while the projects not chosen are cancelled or delayed until the next opportunity.

By far, wind—with 89,000 MW proposed—leads all other renewables in terms of the amount of capacity scheduled for kickoff over the next six-year period. New hydro projects proposed for construction starts between 2009 and 2014 total 24,000 MW. This includes expansions at existing stations and new hydroelectric power stations. In addition, over 7,000 MW of new solar capacity is proposed to start construction during this time frame.

For 2009, 32,000 MW of renewable energy is scheduled to begin construction in the U.S. This includes projects to add new capacity from wind, hydroelectric, solar, landfill gas, and other renewable energy sources.