Managing the coal-combustion process requires rapid and accurate measurements of key combustion reactants and products. For many processes, the focus is on increasing efficiency by controlling the chemistry and monitoring regulated emissions such as NOx. On utility boilers, the state of the art in NOx removal is using a selective catalytic reduction (SCR) system.

A critical element in monitoring SCR operation is the performance of the catalytic bed. Diagnosing potential problems on an SCR may be facilitated by reliably monitoring NOx concentrations at the inlet as well as the outlet to the SCR unit. In addition to obtaining temporal data on NOx concentrations, having spatially resolved measurements enables the location of degraded performance within the catalytic bed.

In the past, inlet and outlet NOx was measured using conventional extractive continuous emissions monitoring systems (CEMS). Such systems are used for reporting regulated emissions, but they are expensive to purchase. Extractive, so-called micro-CEMS cost less than the regulatory CEMS; however, both types require frequent maintenance. Because of these cost issues, operators are reluctant to install multiple instruments to gain spatially resolved monitoring capability.

HORIBA, in collaboration with EPRI and Kurz Technical Services, has developed a low-cost, low-maintenance, in situ instrument for monitoring NOx concentrations: the INM-700. The benefits of its low purchase price and low operating and maintenance cost should be of great interest to operators and maintainers of power boilers. This article describes a series of successful tests conducted at a commercial coal-fired power plant.

Regardless of the NOx formation mechanism or the technology solution selected to remove NOx, all rely on NOx monitoring from the CEMS at the stack or in the duct leading to the stack. Such measurements are distant from the combustion process and are frequently a composite reading of multiple units feeding into a single stack.

Far better would be the ability to use an inexpensive, reliable, and accurate in situ unit analyzer. Such an analyzer would also benefit SCR operations.

More efficient use of SCR systems may be enabled using NOx monitors at the inlet and outlet to the catalytic beds. The SCR process controls emissions of nitrogen oxides through catalytic reduction of NOx by reaction with NH3 to produce N2 and H2O. In general, the SCR consists of a reactor chamber with a catalyst bed and an ammonia-handling and injection system. The ammonia is injected into the flue gas upstream of the catalyst. In commercial operations, SCR systems provide reductions in NOx emissions on the order of 90%.

Optimum operation of an SCR depends on the control system’s reliable monitoring of NOx concentration in the flue gas at the inlet and outlet of the SCR catalytic reactor. Optimization balances the requirements for a high degree of NOx emission reductions using a minimum amount of ammonia. An excess of ammonia contributes to the costly phenomenon called ammonia slip. Current practice uses micro CEMS to monitor at the inlet and outlet of the SCR, but SCR systems may be better optimized using direct inlet and/or outlet NOx data provided by an in situ instrument.

In the remainder of this article we present a general description of the zirconium oxide sensor, its performance specifications, how it was integrated with a coal-fired power plant, test measurement results, and analysis.

At the heart of the instrument is a sensor technology based on zirconium oxide (ZrO2), an adaptation of an analogous measurement strategy used for automotive applications. In general, the ZrO2 for sensor applications is typically processed as a zirconia ceramic. The ceramic can have various transition metals added to enhance certain characteristics. One property that enables ceramic ZrO2 to be used as a sensor is its porosity to oxygen ions and other molecules at temperatures above 650C (1,202F). An O2 sensor takes advantage of this property. 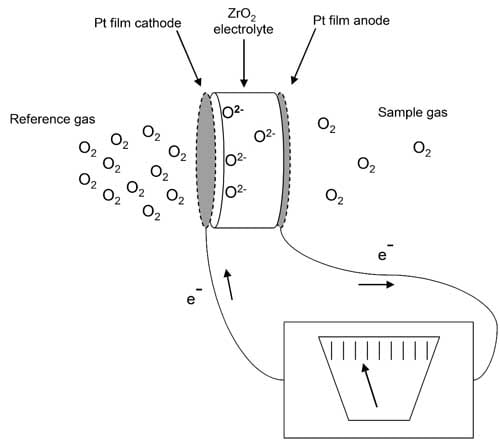 1. Sensors based on ZrO2 used in an electrochemical cell configuration have reliably been used to measure O2 concentrations in gases for decades. Source: www.bosch.com

This technology has been taken a step further by incorporating a novel zirconium oxide sensor into an analyzer that is capable of simultaneously measuring O2 and NOx. This sensing approach was first developed for automotive applications in a direct-installation gas analyzer for real-time, on-board vehicle emissions. It is used to measures NOx and air-fuel ratios in engine exhausts. The sensor has now been adapted for industrial applications such as power plants.

The underlying idea behind the sensor used in the instrument is schematically shown in Figure 2. The sensor comprises an internal heater and two internal chambers. The chambers house three pairs of electrodes: one electrode pair in the first chamber and two electrode pairs in the second chamber. 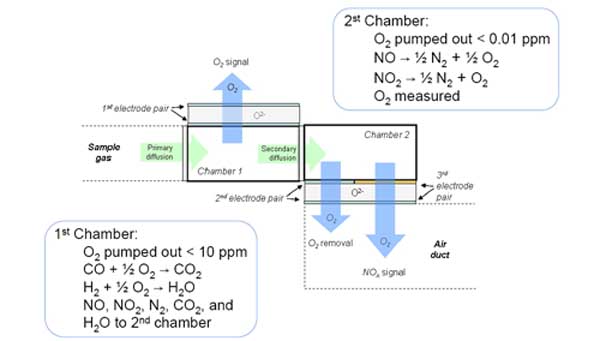 Sample gas enters the first chamber through a primary diffusion element. Within the first chamber, a Pt electrode pair is used as an electrochemical pump to reduce oxygen levels in the sampled gas to below 10 ppm and yield a measurement of the oxygen concentration in the sampled gas. The oxygen-depleted sample gas then diffuses into the second chamber. Within the second chamber, oxygen levels are further lowered to less than 0.01 ppm by a second oxygen-pumping Pt electrode pair. This also provides a feedback signal of the oxygen levels to the electrochemical pump in the first chamber to effect consistent pumping conditions with respect to the changing ambient and reference oxygen levels. The third electrode pair, made of rhodium (Rh), is used to infer the NOx concentration from the oxygen signal. Table 1 illustrates the performance of this proprietary technology. 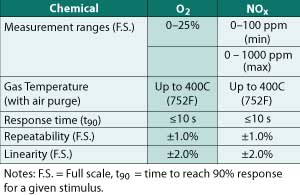 The benefits of this analyzer are several:

Tests were conducted as part of an EPRI-sponsored evaluation study on the coal-fired Unit 9 of TVA’s Kingston Fossil Plant in Harriman, Tenn. Unit 9 has a 200-MW, tangentially fired split furnace. The instrument was installed on the reheat furnace at the economizer outlets, where temperatures can reach 400C (750F) and NOx levels have reached equilibrium. This location is ideal for an in situ NOx analyzer because it is relatively close to the SCR inlet for control purposes, and it is remote from the effects of slag condensation on the probe.

3. The simplicity of the instrument contributes to low installation and maintenance costs. Courtesy: HORIBA Instruments 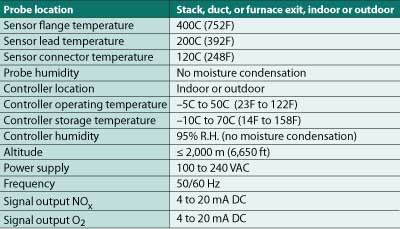 A prototype of the analyzer for long-term testing was commissioned on Unit 9 at the Kingston plant in March 2007 and has been operating almost continuously as of the writing of this article. Earlier sensor characterization tests on site uncovered two problems: signal dropout and signal drift. 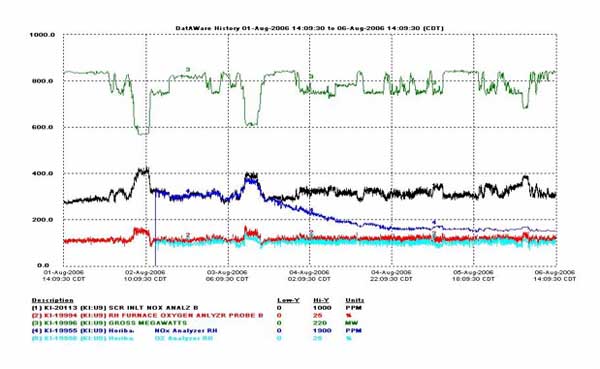 4. Data trace shows signal dropout. Early sensor characterizations in the field uncovered occasional signal dropouts, which led to development of the sensor refresh feature—a reliable solution. Data traces show the plant output in MW, NOx measurements from the instrument and the plant’s chemiluminescence analyzer in ppm, and O2 measurements from the instrument and the plant’s O2 analyzer in percent. Data are presented as a function of time. Source: HORIBA Instruments 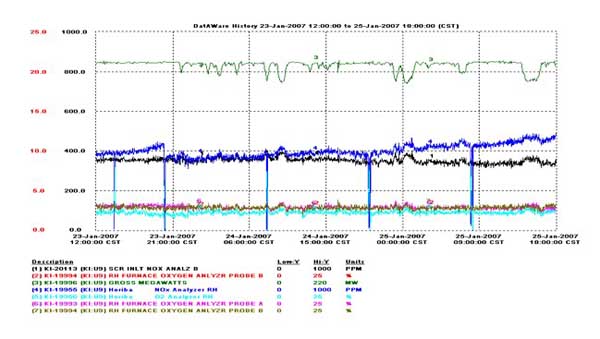 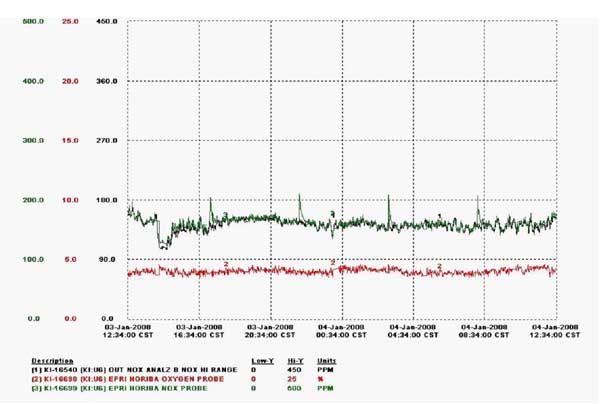 6. Data were taken from an analyzer operating on Unit 6. For Unit 9, application of a sensor refresh every 6 hours eliminated signal dropout and drift. Source: HORIBA Instruments

The instrument has been in operation since March 2007, and long-term testing continues on Unit 9. Figure 7 shows a trace after the 50th day of continuous operation. The instrument demonstrated very good tracking to the plant’s analyzers and showed good response to plant operating conditions. 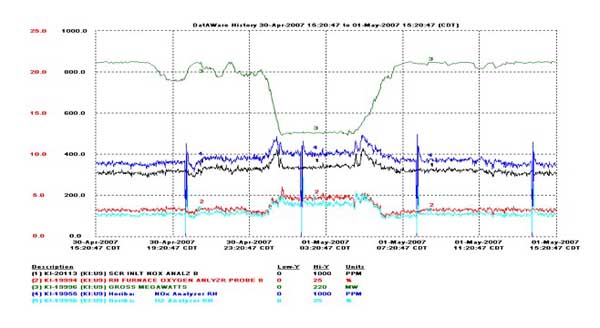