Omaha Public Power District commissioned Unit 2 at its Nebraska City Station in May of this year. The new 682-MW unit joins Unit 1, which went commercial 30 years ago in the same month. The project is outfitted with all the requisite air quality control systems and sports a very good thermal efficiency. More importantly, the plant will provide reasonably priced power for customers of eight municipal utilities that share ownership of the plant’s electrical output. Those utilities paid for their portion of the construction cost and now receive a like portion of the electrical output from Unit 2 under a unique participation power agreement.

Nebraska Governor Dave Heinemann, officials of the Omaha Public Power District (OPPD), and other dignitaries gathered at the Nebraska City Station (NCS) on July 10 to officially dedicate Unit 2, the newest plant, and the one with the lowest air emissions, in OPPD’s fossil fuel – fired fleet. Unit 2, the first new baseload plant OPPD has constructed in 30 years, will ensure a reliable energy supply for OPPD’s 340,000 customers located in all or parts of 13 counties in east and southeast Nebraska for many years to come (Figure 1). 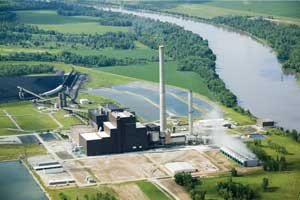 Nebraska City Station Unit 2 (NC2), located on the Missouri River about five miles south of the town of Nebraska City, adds 682 MW to OPPD’s 2,548 MW of existing capacity, raising the utility’s total generating capacity to 3,211 MW, an increase of 27%. OPPD originally contracted for 663 MW, but recent performance tests have shown the unit capable of producing 682 MW, which was excellent news for the project team.

OPPD will use only half of the plant’s generation for its customers’ needs; the remaining half will go to seven other public power entities.

"This plant is a wise investment in energy security for our customer-owners, allowing us to provide the generation needed to satisfy the increasing demand for electricity for many years to come," said OPPD President Gary Gates. In his remarks at the plant dedication in July, Gates noted that the new plant was completed on time and several million dollars under budget.

The timing of construction proved beneficial for OPPD and the other utilities participating in the project, observed Gates, adding that costs for similar plants now under construction elsewhere are significantly higher.

The 646-MW Nebraska City Station Unit 1 (NC1) entered commercial service on May 31, 1979, and reached the milestone of producing 100 million MWh net of electricity on Feb. 2, 2009. In recent years, NC1 has consistently ranked among the lowest cost-of-production steam electric power plants in the U.S.

OPPD’s baseload generating resources now include the two coal-fired units at NCS, five units at the 646-MW North Omaha Station, and the 484-MW Fort Calhoun Station nuclear plant. These three baseload plants, which provide most of the power used by OPPD’s customer-owners, are augmented by three peaking plants and miscellaneous renewable energy resources, which include wind power and a baseload landfill gas – fired plant.

Under a participation power agreement (PPA) with the seven other public utilities, OPPD owns and operates NC2. The PPA required project participants to buy into the project by contracting for the supply of a specific amount of power and paying for the proportionate amount of the plant’s construction cost. Since the plant achieved commercial service, the other participants have purchased electricity from OPPD at the wholesale price or OPPD’s cost to produce the electricity (Table 1). 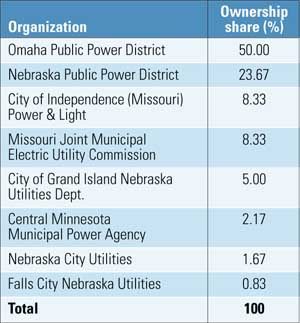 The accounting methods get more complicated when the different classifications of costs are distributed. Specifically, costs include those related to project construction, operation and maintenance (O&M) after the plant enters commercial service, and the variable cost of fuel. For example, the pro rata share of the initial cost of the project included the engineer-procurement-construction (EPC) contract price, other site improvements made as part of the NC2 project, and the direct costs of OPPD employees assigned to the project.

OPPD, as the owner, also made expenditures that are shared, such as the initial coal inventory, spare parts, upgraded and shared facilities, and other supplies inventory. OPPD also supplied the working capital necessary to finance day-to-day operations. O&M costs — defined as the payroll costs with consulting, legal, and insurance fees rolled into the mix — were also proportionally split. Fuel costs include transportation, maintenance, and fuel handling in addition to the purchase price of the coal and oil start-up fuel.

HDR and its partner, Stanley Consultants, provided owner’s engineer (OE) technical support services to OPPD for NC2. Early in the project, the OE team helped guide OPPD through the preliminary engineering phase of the project, including permitting, setting the schedule, developing project specifications, and selecting the EPC contractor. An extensive amount of research and effort went into this front-end work, which paid benefits toward the project’s success. The OE also provided construction management support during the construction and commissioning of NC2.

OPPD selected the familiar EPC approach for constructing NC2 to have a single point of responsibility for the entire project, with a project wrap guarantee that included plant overall performance, plant air emissions, and on-time project completion.

The EPC contract was awarded to NCPP, short for Nebraska City Power Partners, after a comprehensive and rather lengthy selection process (Table 2). The initial project schedule was established early in the process, and the OPPD NC2 team was able to keep the project on schedule; every major milestone was met on time or early. The NCPP team included the well-respected and highly experienced team of Black & Veatch, Gilbert Industrial Corp. (a wholly owned subsidiary of Kiewit Construction Group Inc.), and Zachry Industrial Inc. The key equipment suppliers selected by NCPP are listed in Table 3. By the end of the project, NCPP had issued a total of 228 separate procurement contracts. A significant contributor to the success of the project was the cooperative EPC approach that the OPPD team promoted and NCPP fully embraced. At every significant decision milestone, NCPP allowed the OPPD team to provide input and feedback, which resulted in a very satisfied customer and a great product. 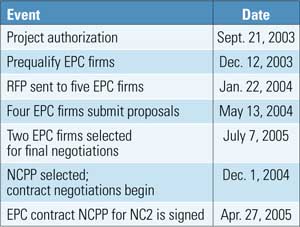 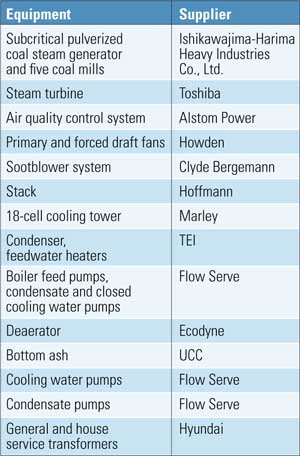 NC2’s EPC contract was the largest contract ever signed by OPPD. The contract’s essential terms cover the expected performance, emissions, and completion date guarantees. The size of the plant was required to be at least 663 MW net with a maximum heat rate of 9,188 Btu/kWh (34.2% net efficiency). The guaranteed price for the plant — set at $629,600,000, or $950/kW installed — certainly came after some sharp bargaining by OPPD.

Other OPPD-specific work was performed outside of the EPC contract. For example, costs related to plant interface modifications to common systems, spare parts and other inventory, and overhead brought the total project budget to $710,000,000, or $1,041/kW. The coal delivery system was also upgraded, and a new 50-mile 345-kV transmission interconnect was constructed to move the power to a new substation in southeast Nebraska. Those upgrades added another $76,600,000 to OPPD’s construction tab and were handled through a separate agreement with other regional utilities. Overall, the project and necessary capital improvements remain a bargain for all the project’s participants at $786,600,000 or $1,153/kW when all the cost categories are included.

The EPC contract included various liquidated damage clauses for failing to meet key contract performance goals, but with the stick comes the carrot. Bonuses were paid to NCPP for exceeding the plant guaranteed output and for keeping the heat rate low. NCPP broke ground for the facility in September 2005; the construction completion date was set for May 2009 and was met by NCPP (Table 4). 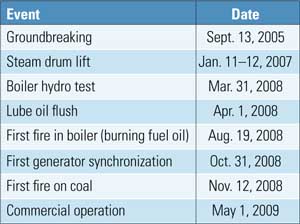 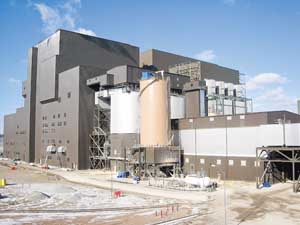 2.    All the right steps.  NCS2 uses an SCR followed by a spray dry absorber and a baghouse to keep the plant’s emissions within its permit limits. Courtesy: OPPD 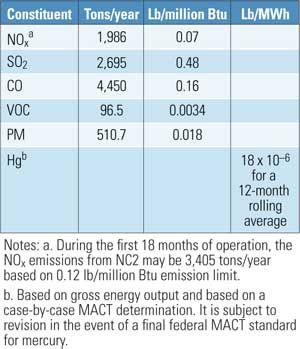 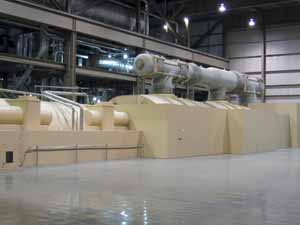 The project specifications included the purchase of a high-fidelity simulator as a training tool, enabling operators to fine-tune their skills and familiarize themselves with the new controls and plant equipment before start-up. The simulator can also be used as an engineering tool to test changes in the control logic before updating the operating software.

Although this was the first coal-fired plant constructed by OPPD in a generation, the team overcame its lack of construction experience. "My thanks go to NCPP and their suppliers, and the OPPD project management team for their fantastic coordination of this challenging project, and to HDR Engineering and Stanley Consultants, whose support was superb," said Ken Roth, division manager of projects and construction at the project dedication. "The OPPD team included Bud Eidem, project manager; Dave Wesely, site project manager; and Dave Wetrosky and Tim Yager, who alternated in the role of startup manager," Ken said. "Other project team members include David Aderemi, Sue Badberg, Eric Bender, Mike Neu and John Wichman. They’ve all done an excellent job."

The plant will remain a valued employer in the Nebraska City region for many years to come. Its staff has gradually grown from about 98 employees prior to the construction of NC2 to approximately 164 employees today.