Vattenfall to Scale Up Oxyfuel Plant. The Swedish state-owned utility reported that during the first year, the oxyfuel approach had been tested on a small scale at the research and development facility at Schwarze Pumpe, and that it now sought to demonstrate — through tests and experiments — that the technique could be scaled up. Vattenfall’s ultimate goal is to commercially operate CCS power plants in the years following 2020. The 30-MW thermal pilot plant at Schwarze Pumpe is designed to capture 95% of carbon dioxide, "but we believe we can even reach 98%," said Bjarne Korshøj, Vattenfall CCS manager, on the project’s first anniversary.

E.ON, Siemens Start Up Carbon Capture Facility at Staudinger. In mid-September, E.ON and Siemens switched on a 1-MW pilot plant that will test postcombustion carbon capture on Unit 5 at E.ON’s hard coal – fired 510-MW Staudinger facility in Grosskrotzenburg near Hanau, Germany (Figure 2). The facility, designed to be retrofitted onto existing plants, will operate until the end of 2010. Findings will serve a large-scale demonstration of the technology, and E.ON expects that an industrial-scale CCS coal-fired plant could come online in 2020. 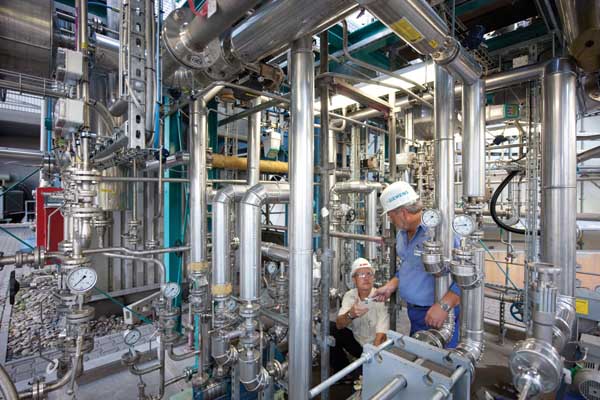 Siemens developed the postcombustion capture process, which uses a scrubbing agent — a "special cleaning agent" — to trap about 90% of low-temperature CO2 from flue gases in an absorber. The CO2 -laden agent is then fed into a desorber to get rid of the greenhouse gas by raising the temperature, before feeding the regenerated agent back into the absorber.

The project is being sponsored by the German Federal Ministry of Economics. E.ON recently called on the government to pass an infrastructure law for carbon capture at coal-fired power plants early in 2010, saying that it could lose a role in the future of CCS. E.ON, which is testing CCS in the Netherlands, Sweden, and the UK, said those countries had approved operation of individual test plants to speed up the process, but the Berlin cabinet had delayed voting on a national law this past June, owing mainly to a lack of public support for coal as a fuel for future power generation.

Alstom, Dow Facility to Test CO2 Capture from Flue Gas. Alstom teamed with the Dow Chemical Co. to start up a 2-MW pilot plant that captures CO2 from the flue gas of a coal-fired boiler at the Dow-owned facility in South Charleston, W.Va. The pilot plant uses proprietary advanced-amine technology jointly developed by Alstom and Dow to capture approximately 1,800 metric tons of CO2 per year (Figure 3). It is expected to operate for the next two years. Data from the test will be use to optimize the technology, the companies said. 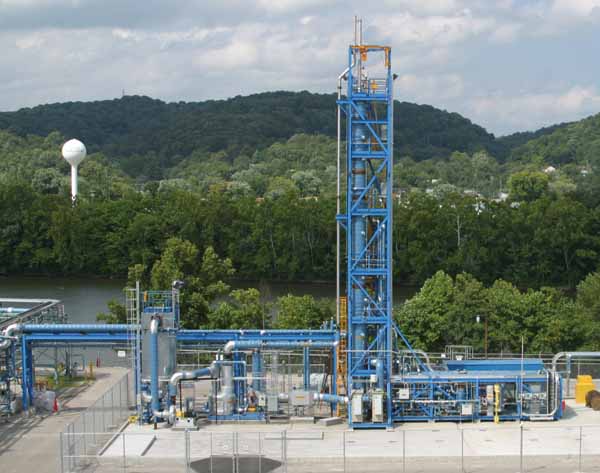 3.    Amine, Amen. Also this September, Alstom and The Dow Chemical Co. started up a 2-MW pilot plant to capture CO2 from the flue gas of a coal-fired boiler at the Dow-owned facility in South Charleston, W.Va. The process uses the companies’ jointly developed advanced amine technology to capture about 1,800 metric tons of CO2 per year. Courtesy: The Dow Chemical Co.

Alstom is testing, or plans to test, three main carbon capture technologies at 10 facilities around the world. The company’s oxyfuel combustion process — a precombustion carbon capture technology — is being developed at Lacq, a gas plant in France, and at Vattenfall’s Schwartz Pumpe project. Along with developing advanced-amine technology at the Dow pilot facility, Alstom has been testing its chilled ammonia process at the Karlshamn oil and gas facility in Sweden and at We Energies’ Pleasant Prairie plant in Wisconsin.

In October — after 7,000 hours of operation — Alstom and We Energies announced long-awaited results for that pilot project, saying it had successfully demonstrated 90% CO2 capture from a 1.7-MW plant slipstream. (See our Feb. 2008 issue for project details.) The project also produced high-purity CO2 with low ammonia (<10 ppm) and water content (<2,500 ppm). The lessons learned have been essential for the scaled-up 20-MW cpature system installed at a validation project soon to be commissioned at American Electric Power’s (AEP’s) Mountaineer plant in New Haven, W.Va., the companies said.

AEP Readies Mountaineer Validation Project for Commissioning. Meanwhile, American Electric Power told POWER in September that it had started its 20-MW carbon capture system to confirm that it was capturing a clean stream of the greenhouse gas for the $76 million validation project at its Mountaineer plant (Figure 4). 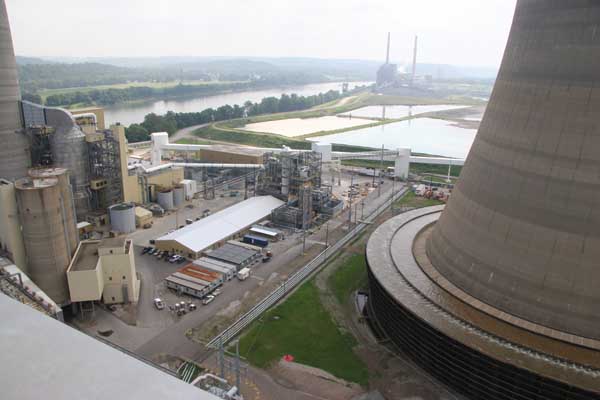 4.    The acid test. American Electric Power is preparing to commission a 20-MW carbon capture and sequestration system (shown here between the stack and the cooling tower) that is expected to remove and sequester some 100,000 metric tons of CO2 emissions annually from the flue gas stream of the utility’s 1,300-MW Mountaineer plant in New Haven, W.Va. The system uses Alstom’s chilled ammonia process. Courtesy: AEP

The project will officially be commissioned on Oct. 30. The Mountaineer project will then operate for up to five years and help validate the effectiveness of Alstom’s patented chilled ammonia process for carbon dioxide capture and the viability of storage in the local geology. The project is being watched closely around the world because it will be the first to capture CO2 from a pulverized coal – fired power plant — as well as inject it into a permanent storage site more than 7,800 feet underground. It has also been hailed for its potential to provide the critical information that could scale up capture and storage technologies for new power plants and for the retrofit of existing facilities.