OWC is known in the tech field for its computer hardware. It’s also known for its on-campus power generation, which sets it apart from others in the high-tech field, showcasing a commitment embraced by the company’s founder and CEO.

So-called “green companies” can take many forms. In some industries it involves a recycling program or a commitment to environmental stewardship, perhaps planting trees, adopting a highway for trash pickup, or providing space for a community garden. For others it may include sustainable business practices, a movement being adopted by more companies as they seek ways to control costs.

Many want to control what they spend on energy, which is why rooftop solar arrays and on-site wind turbines have become prime assets for those who want to produce their own power—or want a reliable source of backup power should the need arise.

Some businesses embraced the movement before it became widely fashionable. One of those—computer hardware company Other World Computing (OWC), headquartered in Woodstock, Illinois (Figure 1), with a satellite campus in Austin, Texas—was an early adopter. Larry O’Connor, the company’s founder and CEO, has been committed to sustainability from a young age. His tinkering with electronics led him to start a company in 1988—he was 14 years old—that eventually became OWC, which today also includes the online store MacSales.com.

“I love technology and its application,” O’Connor told POWER. “I grew up learning ‘waste not, want not,’ and that, in many ways, drove me to my first business activity with re-inking printer ribbons, and [then] into better options for maximizing existing computers—making a currently owned system run better than something new. [This] saved money and also resources. In seeing the same opportunities in the use of resources needed to operate OWC and the technology being there to be more efficient, it was a no-brainer to make it so.”

And he did, making OWC one of the leading tech companies when it comes to producing its own power, and the recipient of POWER magazine’s Commercial and Industrial Generation Award.

The 37,000-square-foot OWC corporate headquarters building in Woodstock, Illinois, opened in March 2008, is emblematic of O’Connor’s vision. It was built on a principle of energy efficiency, protection of natural resources, and a small carbon footprint with low emissions, part of the company’s commitment to environmental responsibility. Computerworld magazine in 2008 named OWC one of its top “Green IT” companies for the innovative and environmentally responsible design of the Woodstock building.

The company brought its Vestas V39-500 kW wind turbine (Figure 2) online in October 2009, making the company a pioneer among technology manufacturers and distributors with 100% on-site wind power. The 194-foot-tall turbine generates about 815,000 kWh of electricity each year. Depending on the time of year, it can generate twice the amount of power needed by the headquarters building; the company estimates that on average, excess power production is about 10%.

Average wind speeds at the Woodstock location are 12 to 14 miles per hour, and during normal operation the blades spin at 30 revolutions per minute (rpm), or a speed of 136 miles per hour (mph) at the wing tip. Maximum speed is 37 rpm, or 170 mph at the wing tip. If wind speeds excess 75 mph, the blades go into “feathering” mode, turning flat and tracking the wind’s direction, offering the least-resistant profile to the wind.

OWC in 2015 added solar power as an energy source, both at its Woodstock headquarters and its Austin operations. There are 770 SunPower solar panels on the rooftop at Woodstock, rated to produce 265,000 kWh annually. There are 147 panels in the array at Austin, rated to produce 60,000 kWh/year, about a third of the energy consumed in total at the three-story Austin building, where OWC occupies one floor and part of another. The company with the addition of the solar arrays has since 2015 generated more energy than it consumes at its offices, sending the excess back to the local grid.

The Woodstock location includes a geothermal system that provides both heating and cooling. According to O’Connor, “It’s a standard heat exchange system with about 60 wells where [through] heat exchange we are able to do very high-efficiency heating in the winter, pulling heat from these wells and in the process reducing the ‘stored’ temperature level beneath.” He said the process is reversed in the summer. 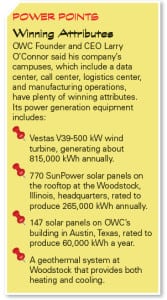 “Effectively, we pump heat in with exchange cooling the air in the facility, and pump cool in when we are using the exchange to heat the facility,” he said. “In addition, the facility has very advanced CO2 monitoring to manage both active areas in the building as well as minimize waste in terms of external air exchange.”

OWC’s Illinois headquarters building was LEED-certified in 2010. LEED (Leadership in Energy and Environmental Design) is a rating system devised by the United States Green Building Council (USGBC) “to evaluate the environmental performance of a building and encourage market transformation towards sustainable design. The system is credit-based, allowing projects to earn points for environmentally friendly actions taken during construction and use of a building,” according to the USGBC.

Though the Texas office is not LEED-certified, O’Connor said OWC has “done things for efficiency in Austin including waterless urinals, high-efficiency toilets and taps, air driers, etc. We did not apply for LEED review on this building. We occupy the third floor and part of the second, but [we] made the efficiency improvements throughout the entire three floors.”

Sally Washlow, a long-time tech executive who came to OWC in 2017 as senior vice president of sales and marketing, said the company’s green and sustainability initiatives factored into her decision to join the company.

“Absolutely, the environmental priorities in place at OWC were part of the thought process, as the investments behind these initiatives are truly from the heart of the company and have been significant on the site and in the community,” she told POWER. “This is more than ‘marketing,’ these are active decisions that the organization has made and continues to live as an integral part of the business and Larry O’Connor’s mission.”

Though OWC is controlling its costs by generating its own power, O’Connor said it was not done as a money-making venture. He said “We don’t really” when asked whether he has a dollar figure for the company’s cost savings from its energy production.

“We could certainly estimate what we don’t pay in energy due to production. Due to the less-than-advantageous buyback rate, which is a fraction of the cost we buy power, we do not make money on the additional energy we throw off,” he said, noting OWC is contracted for its draw from wind energy. “The ROI (return on investment) was projected at a couple decades overall for the investment made, but that wasn’t the point, other than we know this is able to pay for itself. That was the case in 2009 when we started with wind, and [the] ROI back on solar is even better today.”

The sustainable practices include more than just power production. “In addition to just energy, we did things like a paver parking lot so we didn’t have to waste good land for a retention pond,” O’Connor said. “We have the biobed [a Bio-Aquifer Storm System] there [in the parking lot] to break down pollutants from vehicles instead of a pond where runoff [would have] just accumulated.”

OWC’s manufacturing includes products such as production-grade solid-state drives (SSDs) and external hard drives, along with expansion products and enterprise storage. The company also offers new, refurbished, and certified used Apple products such as Macs and iPads. OWC has its own technicians who test and inspect products, and its goal always has been to “create innovative DIY [do it yourself] solutions to give you the most from your technology.”

That DIY spirit extends to how it powers its campuses, producing its own energy to remain a leader among technology companies when it comes to innovation in sustainable business practices.

“I like to see things long-term and sustainability ensures we’re here doing what we love and leaving a world for our kids to love,” O’Connor said. “It’s the tip of the iceberg and every little bit makes a difference. It starts with each of us to make that difference.” ■